How many triangles can you obtain using the 6 vertices and center of a regular hexagon?

Let's say there is a regular hexagon with center at point O. 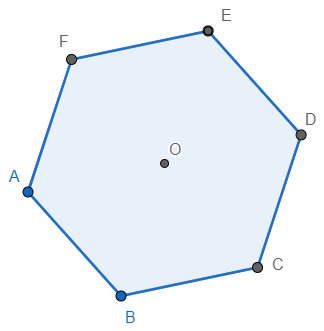 Question 1. How many triangles can you obtain using the 6 vertices and its center?

Question 2. What is the largest number of different triangles you can make?

Two triangles will be called different if at least one element differs in them: the angle value or the side length.

I think there are five essentially different triangles all obtained by rotation or inversion of the following triangles $$ AOB, AFB, AEB, AOC, AEC $$ and the number of times each of these triangles appears is as follows $$6,6,12,6,2 $$ which adds up to $32$, as desired.

Jean Hominal makes an important point in the comments

Triangles $AFB$ and $AOC$ are congruent so could be obtained one from the other by an extra translation although we'd lose the overall symmetry of the hexagon. My answer above assumes that we can rotate and invert while maintaining the hexagonal symmetry but if you would like to consider congruent triangles as being the same then the answer would be four.

We can obtain four triangles, specifically two equilaterals ABG and ECG, one isosceles triangle EFD and one right angle triangle ABC. If we draw the other four missing chords and the one missing radius, we obtain too many triangles to count (I stopped at thirty). 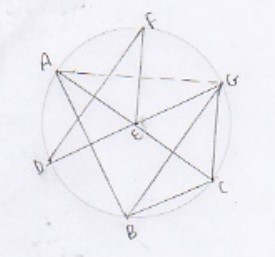 -3
Self-intersecting polygonal chains in a hexagon

7
Maximum number of pieces of equal area you can obtain by cutting a pizza a certain number of times
16
Touching matchsticks with compass and straightedge
7
Clash of arrows
25
Tiling a Hexagon with Diamonds
11
6 nails String Art
4
Dodecagon in a big circle
3
Hexagon in a circle
8
Geometry haberdasher problem - square to equilateral triangle variation
5
How can I cut a cube so that all its vertices except for two mutually opposite vertices are equally distanced from the plane of the cut?
8
The broken wheel