Which step is creaky?

Ms. Flor has a 50-step wooden staircase that allows access from the first floor to the second floor. One of the steps creaks when a person stands on it. Diego and Mike are going to climb the first 15 steps. Diego stood on the first step and then climbed to the end jumping two by two. Mike from the floor jumped three steps and back one step, then jumped three steps and back one and so on to the end. In no case was the creaking step heard. What should be the step that creaks in these first 15 ?

The choices given in my book are as follows:

I found this question in my puzzles book Reason and Logic from 2000s. This problem seems to be an adaptation from a reprinted copy of the Martin Gardner's Puzzle Carnival of the 70s.

Regarding on how to approach this problem is the part where I'm still stuck, as I'm not sure what jumping "two by two" and "jumping three and back one" means.

I've illustrated my question in the figure below: 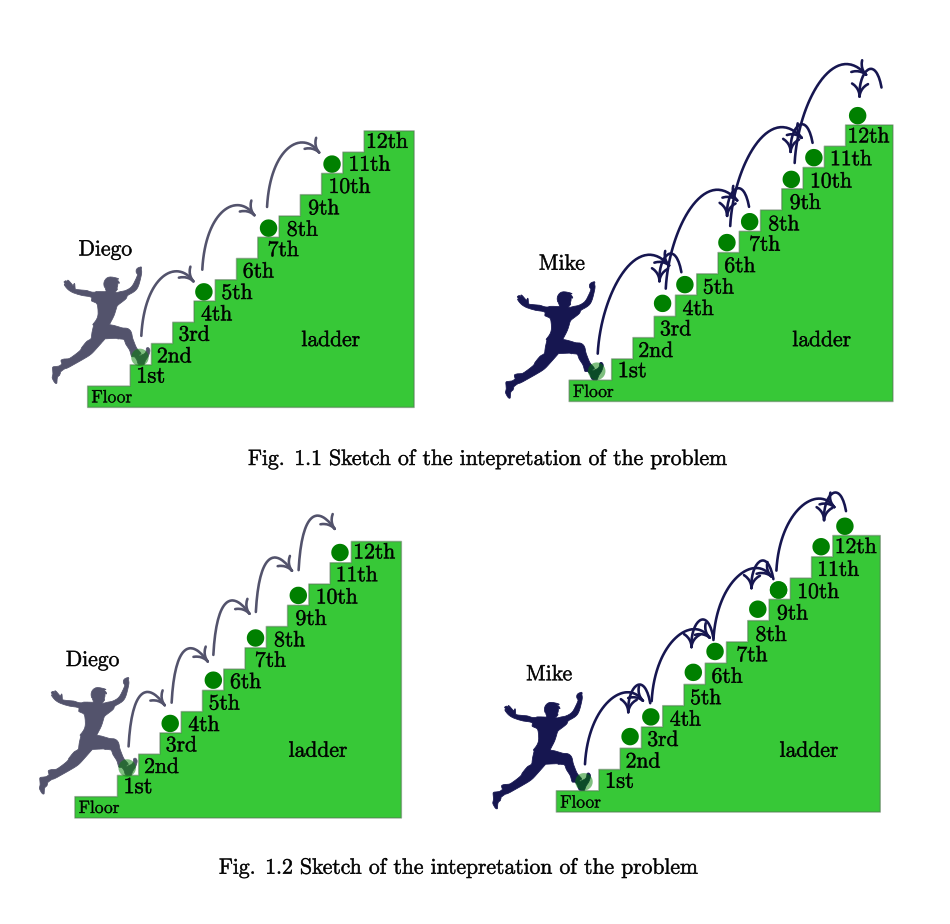 As it can be seen in the first sketch, Diego starts at the first step and then jumps two by two, leaving two steps untouched between. Then Mike follows him from the floor by jumping three, in other words moving straight to the 4th and then returning to the 3rd.

In this scenario, the only steps left untouched are the 2nd and the next three. These are, 5, 8, 11 and 14. Thus any of those can be the step being asked.

My other interpretation is the second row of images. Diego stands on the first step and then jumps not to the 4th but instead to the 3rd step, and he goes on and on, always landing in the odd steps.

Mike follows him but instead of jumping forward three and back one, and landing on the 4th step as indicated in the first picture, he would land on the 3rd step and then back to the 2nd step. Then he would repeat this sequence, and along with Diego, no step is left untouched and since no creak was heard then it meant that such step is not among those 15 steps.

But this is not the answer according to my book. What went wrong in my analysis? Please include a diagram in your answer, but more importantly, a detailed step by step (no pun intended) solution. There's one more thing which I'm curious. Could had this been modeled by a series?

for Diego. But for Mike it would be different and I don't think it could be modeled using an arithmetic series. Would this approach be any help? The problem is only about 15 steps, and making an extended drawing for all 50 steps seems impractical.

Your second interpretation is the correct one, but your picture of the steps that Mike visits is incorrect.

every step except for 1 and 14. He would visit 14 if he were to continue on, but they stop when they reach step 15.

Therefore the answer is:

4
The Tricky Tunnels!
13
Moving back and forth between two terrible fates
3
Maximise Steve's step counter reset process
2
How many moves are at least needed to find a ball that is from the majority?
8
Mathematical puzzle: ten digit lock number
4
5 Digit Code Puzzle
2
How do I find the least number of times a shuttle can travel from one place to another?
9
Confusion on a math puzzle
4
How many steps for matchstick-Lychrel numbers?