Yes, this is the legendary wall

This is it. This is the very wall.

His life, his work — this wall was the center of it all. One simply cannot imagine his fame, greatness, and legacy without thinking about how this wall was always there to witness all his ups and downs. There might as well be "Mr. H was here" carved on it.

Having a good time was never a major part of his life. Well, never except once: and yes, this wall bears evidence to it, too. Sure, now it may be covered in posters and signs and brush strokes and suspiciously identical splashes of paint, but legend has it, if one knows where to look, what connections to make, the wall will speak of his glory days. In true connect-wall fashion, one must find the four linked groups of four objects each and uncover the truth. 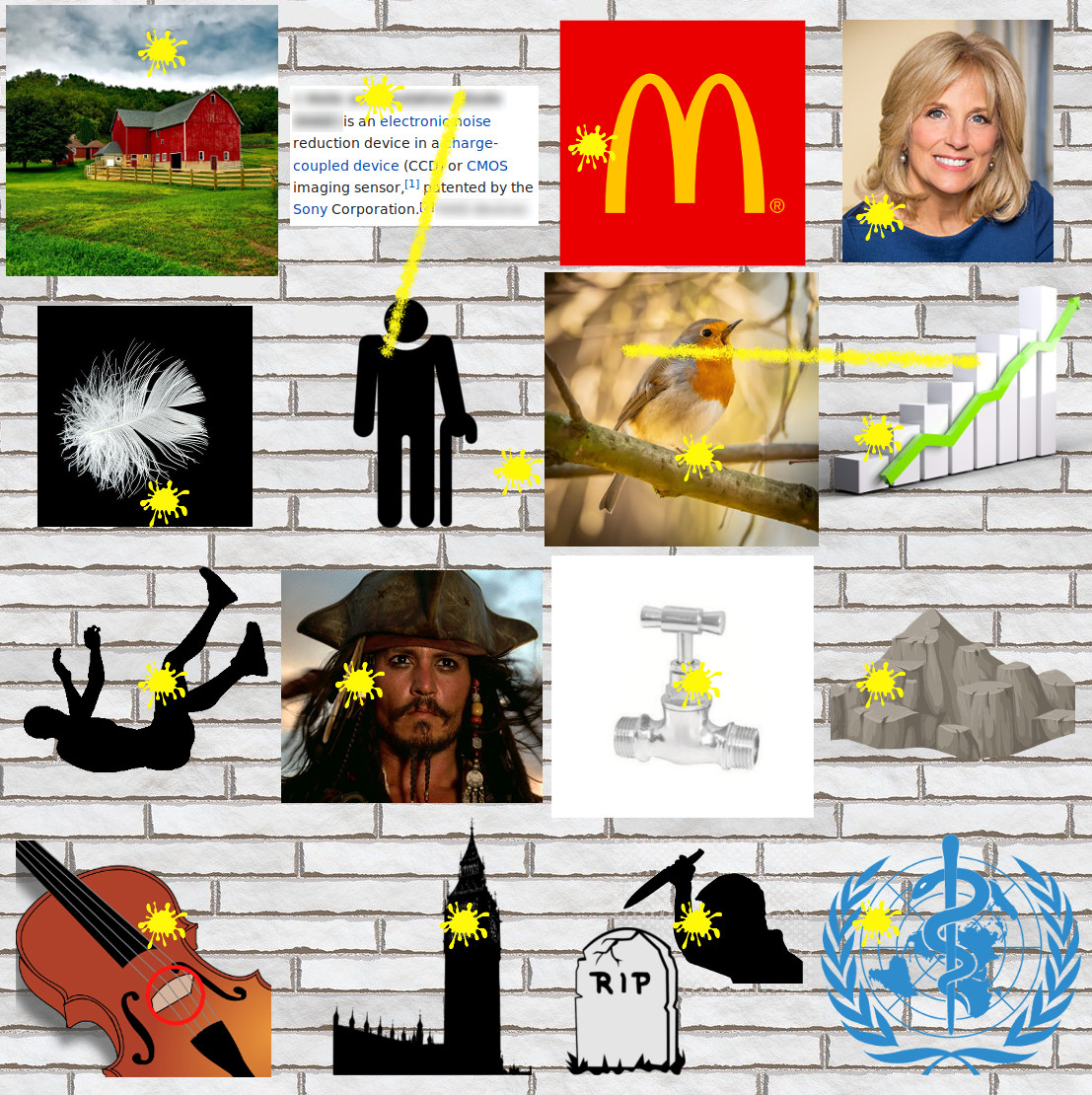 What four-letter word describes the time of the year that went particularly great for him? Who is this mysterious Mr. H?

I first noticed that

This might become a connect wall of nursery rhymes

I saw "McDonald's" and "farm" at the top

I was able to look up what the image at Row 1 Column 2 was by searching the keywords in the image-- turns out, it was a HAD,

which confirmed my suspicions.

And the more images I was able to get, the more my suspicions were confirmed.

Now of course, the groups are

Old MacDonald Had A Farm (OLD, MCDONALD'S, HAD, FARM),
Jack and Jill (JACK, JILL, UP, HILL),
London Bridge is Falling Down (LONDON, BRIDGE, FALL, DOWN), and
Who Killed Cock Robin (WHO, KILL, COCK, ROBIN).

This is just purely amazing:

If you trace paths as shown above from spot to spot (e.g. forming the title for Old MacDonald, you would go from the OLD image to the MCDONALD'S image to the HAD image and finally to the FARM image), you will get this: 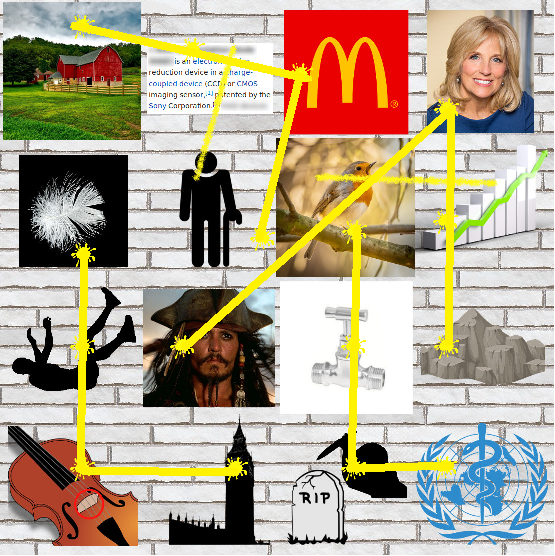 which seems to spell FALL!

Thus we now know that

FALL was a great time for Mr. H.

I was able to infer that Mr. H was Mr. Humpty Dumpty.

This must be correct because

Humpty Dumpty is also part of a nursery rhyme, which is the theme of this connect wall.

But more than that, it also confirms the answer to the first question! You must remember

Some other things to note:

- The flavor text all makes sense now.
- The color of the spots and lines was not accidental either-- after all, because Humpty Dumpty was an egg, when he fell down the wall, yellow would have splattered on the wall. (Edit: In The Sphinx's Lair chatroom, OP confirmed that that was not his original intention.)

38
Death of the Great American Chemist
11
This one has everything covered
10
The highly public trial of Capo di Tutti-Capone
7
Who was my uncle?
12
What are these holes in my Connect Wall?
14
Connect Wall: "Who's that Pokémon?"
13
Sergeant Sequence calls for back-up
31
Re-Venn-ge of the Connecting Wall
4
PRINCESS CONNECT! wall
2
The Pub Quiz and the Passion, take two