This is a Carcass Walking puzzle. The objective is to place the given cities into the grid, connect them with roads, draw one river across the grid, and find places for the given number of cloisters.

I think this puzzle deserves a step-by-step logical write-up, as it's a really interesting and novel new grid deduction puzzle type, and it would be beneficial for others to understand how to reach the solution... So here goes!

First, each space containing an X and the spaces around each cloister must be empty (here I use green for empty spaces; I also use it to colour around the paths, as it looks nicer in the end!). 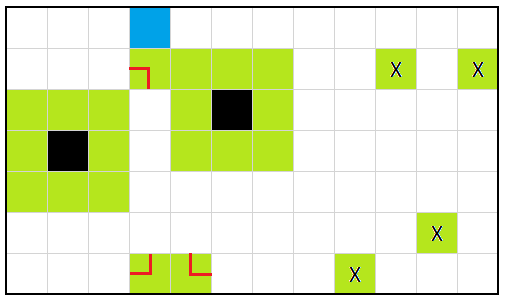 There must be a city in the top-left corner at the end of the given road; there is only one legal position for this, since it cannot border the river tile. The river must then stretch to the right past the cloister's surroundings. We can also fill out one more road piece extending from the known city.

Note also that there must be a city in the bottom-left corner at the end of the given road; however, we cannot be entirely sure of its orientation, only that the bottom two cells of column 2 must both be part of the city, no matter how it is oriented. 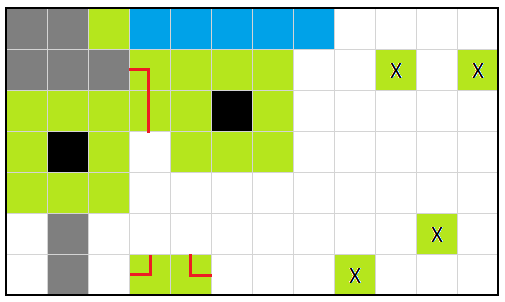 Both cities so far identified must link via their roads to at least one as-yet-unknown city, to stay part of the city/road network. At this point, it is crucial to note that we are severely restricted in the number of available road segments - we only have 7 total (4 of which are already placed) and 2 bridges. In fact, the bridges are useless to us right now, as it is fairly straightforward to see that the river cannot reach this left-hand part of the grid (columns 4/5) - we would need a bridge in R6C5 directly above the already-placed road piece, but for the road to continue over the other side of the river, the river would need to terminate in the bottom-left corner of the grid, which is impossible given the proximity to the city. 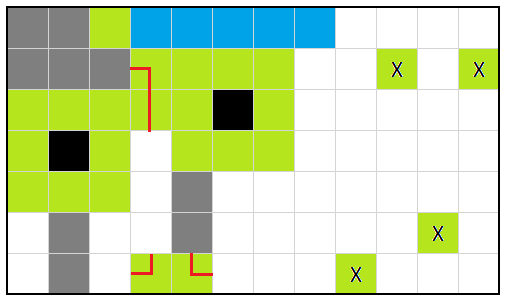 We now have 5 options how to place this city: 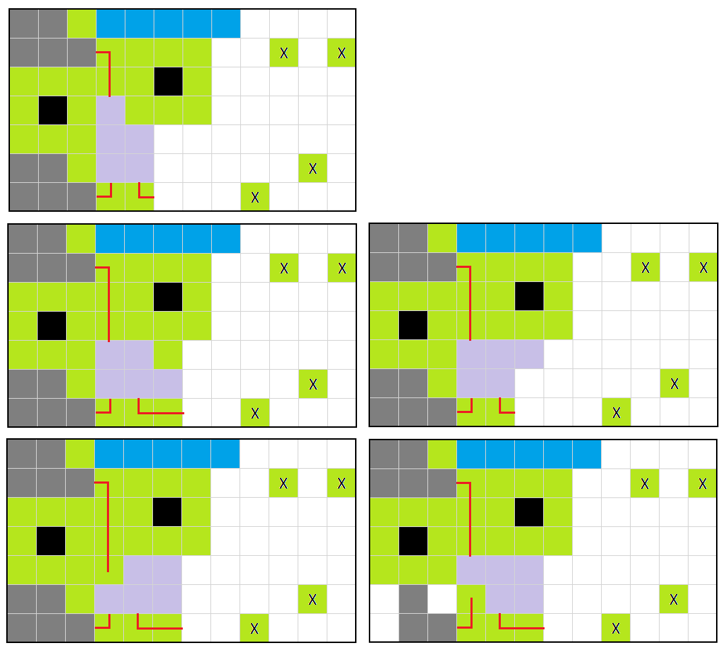 The bottom two options both have ambiguities, but pleasingly we can rule out both of these options by noticing that in both cases we have used up all 7 road pieces and still have 2 bridges remaining - since a bridge cannot share an edge with a city (notably meaning that each city must connect directly to a road piece, not a bridge) it is now impossible to place both bridges and the fourth city. The cells in common to the other 3 options are as follows: 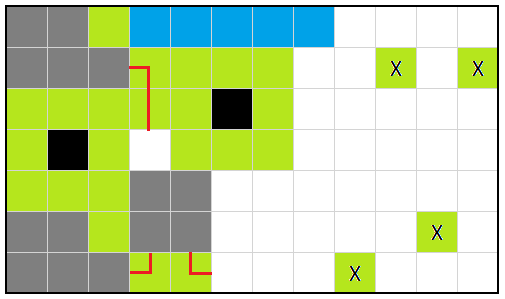 The exit road from the third city is already given; this must lead to the fourth city and incorporate both bridges. The furthest spaces this bridge-road can possibly reach are indicated in orange for scenarios where R4C4 is road, and yellow when R4C4 is city: 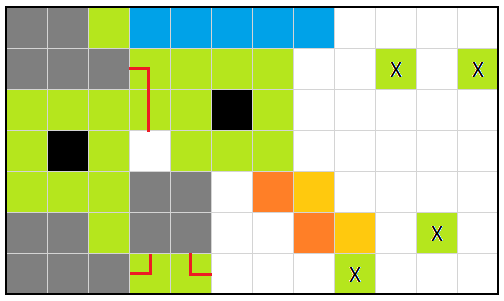 For two of these cells to be bridges the river must somehow pass beyond these yellow/orange spaces and exit the grid through one of the 3 unshaded spaces on the bottom row to the left of the X. It cannot exit through the leftmost space (which would need to be a bridge because of the road to its left) because either R6C6 would need to be illegally occupied by river (it would directly border a city tile) or the middle of the 3 spaces would also need to be a bridge, which also results in an illegal situation (the river would exit the grid by turning on a bridge tile). Thus this space must be a road, going straight right or bending up. 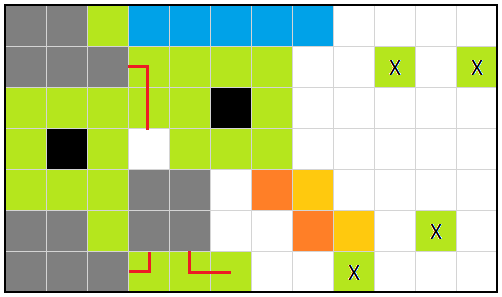 We now have 2 road pieces and 2 bridges left to place. If the next piece of the route leading towards city 4 is road then the 2 bridges must be adjacent to each other. There is only one space where such an arrangement would fit (since another road space is required at the end of the double bridge): 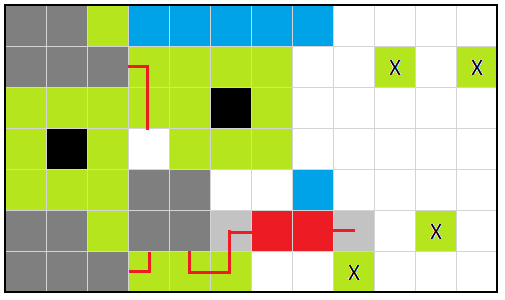 But this makes the river's route impossible to plot, since it must flow straight through each bridge tile, which would lead it away from the edge where it is supposed to exit. Thus by contradiction the next piece of the route must instead be a bridge. This cannot go in R6C6 (would border the city), so must be in R7C7. This also fixes the positions of the final pieces of road and the last bridge: 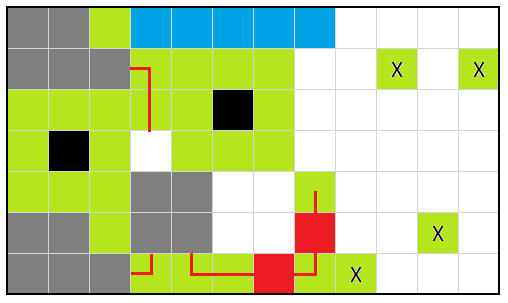 ...which means the third city is now also fully placed and we can plot the river's end: 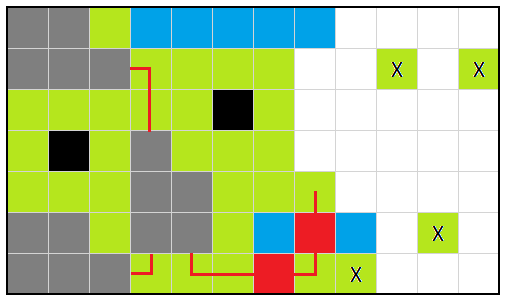 Since city cannot border river in R5C9, we know that the final piece of path must go straight up and R4C8 must be city: 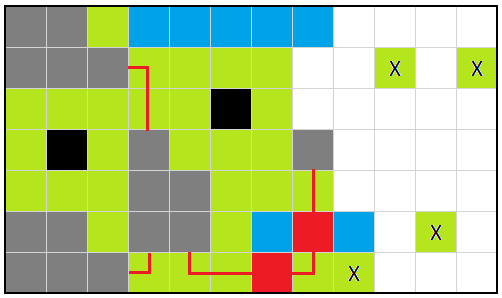 The city cannot extend up 3 spaces in column 8 or it would border the river at the top. All other legal options for the city's orientation requires R3C9 and R4C9 to be shaded as city. The river can then be extended a little at both ends: 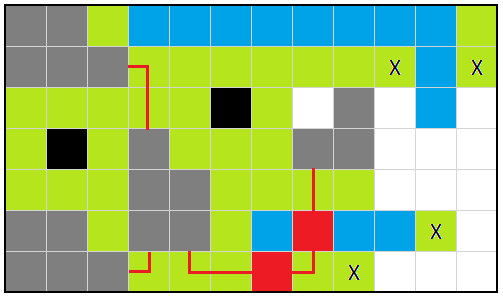 Since the space between the city and the river must be empty, there is now only one way to orient the city: 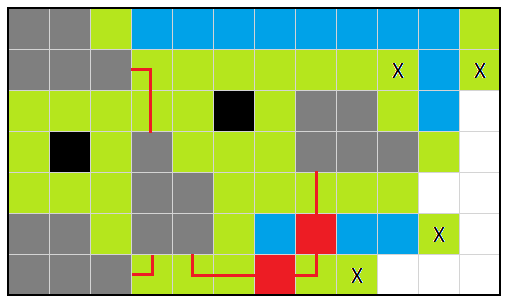 And finally there is now only one way to complete the river, and the puzzle is solved! 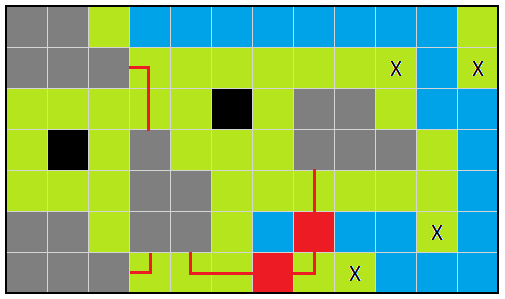 Is this the right answer? 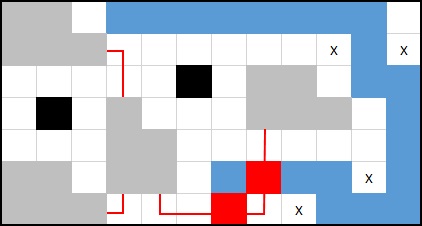 I think if it is, is the only solution...