You should have woken up this morning squealing with excitement. As a historical phonology student, you will be among the select few accompanying the renowned Professor Panini on one of the first linguistic research expeditions by time machine. You know the map of Tyre and the Phoenician alphabet by heart. You've transferred all your important phonological charts to clay tablet. Most importantly, you have spent hours in front of the mirror making sure your tunic looks like the pictures earlier expeditions have brought back. (Those were from 1100 BC, but you figure your 900 BC trip shouldn't involve fashion that's too drastically different.) All for the launch today.

If only your excitement weren’t buried under a heavy blanket of dread. With all due respect for Professor Panini, her droning lecture style has you falling asleep within minutes. Too bad you nodded off during a briefing yesterday right when she was discussing important procedures — such as what you were actually supposed to do once you got to the launch station today. To make matters worse, during the expedition, you’re paired with another research assistant who is stunningly attractive, and your pride won’t let you ask him things you were obviously supposed to know…

You decide you can sneak a look at his notes later. But now, you’ve only got your wits and intuition to go off of. Immediately after arriving at the rendezvous location, you line up with the team in pairs to board the time machine.

After watching a few pairs go through, you deduce: “So…the two of us just have to draw on those tablets, and it lets us in, right?”

“Yeah, and then grab the supply pack with your name on it on the shelf to the right after walking about twenty paces,” your expedition partner says, mimicking the professor’s accent and tone of voice. You chuckle in response. Inside, you feel a huge sense of relief that you won’t be too lost after getting in. Now, about getting in…

“Honestly, I’m not sure I’m comfortable with how much this system depends on security through obscurity,” he continues. “Clever, though, I have to give them that — it’s so obvious for anyone studying this exact topic but rarely for anyone else. Keeps random Hitler-killers out.” Obvious, is it… “Minimal effort to figure it out, too, for each pair,” he says, as if it's a pun. You pretend to find the joke hilarious.

It’s now your turn. You sneak a look at your partner’s tablet:

He thinks for a few seconds and then draws a triangle pointing left. The screen displays a nice checkmark. With a flash of insight, you have finally gotten his joke. Quickly, you turn back to your sentences.

You smile and draw something on your tablet, which finally lets you into the time machine.

What did you draw?

is a sentence that has one word wrong -- or more precisely, one phoneme in one word. Two words that differ by a single sound are called a "minimal pair". 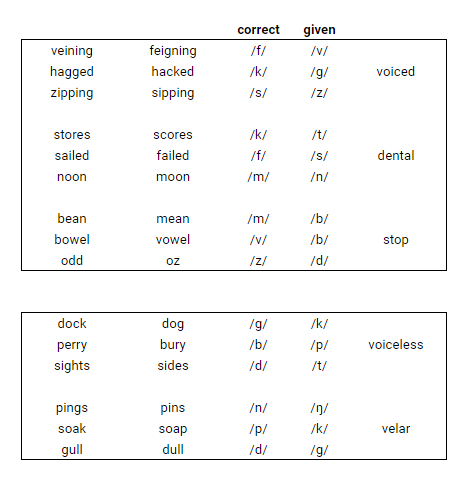 Each of the changes has something in common - it always changes a single consonant to the corresponding sound with a certain property. For example, /f/ is a "voiceless labiodental fricative"; it is changed to a "voiced dental fricative". The property that is changed is the same for each set of 3.

The first three properties are "voiced dental stop"; this describes the sound /d/, which is written in the Phoenician alphabet as a left-pointing triangle,

So, the only "voiceless velar" sound in Phoenician is /k/; we must therefore draw the

Not the answer you're looking for? Browse other questions tagged pattern story language or ask your own question.

19
The secret research of Professor Hubert J. Farnsworth (a murder mystery puzzle)
10
Who stole my laptop?
22
Edward and the seven imps' Game
5
The jewel's legacy (part 2)
10
A Letter: When Sherlock meets Moriarty
16
What was the child sent to buy?
8
Where did my Professor GO?
8
The Message in the Stars
5
Lost in time and space
12
A Boring Lecture - ft. Eggs, Donuts & Pills