My brother just created this puzzle for me for Halloween, at first I thought it looked simple, but then it turned out to be very challenging (at least for me!) I'll add it to my collection/app soon. I hope you like it:

CHALLENGE: Guess the hats of the prisoners. 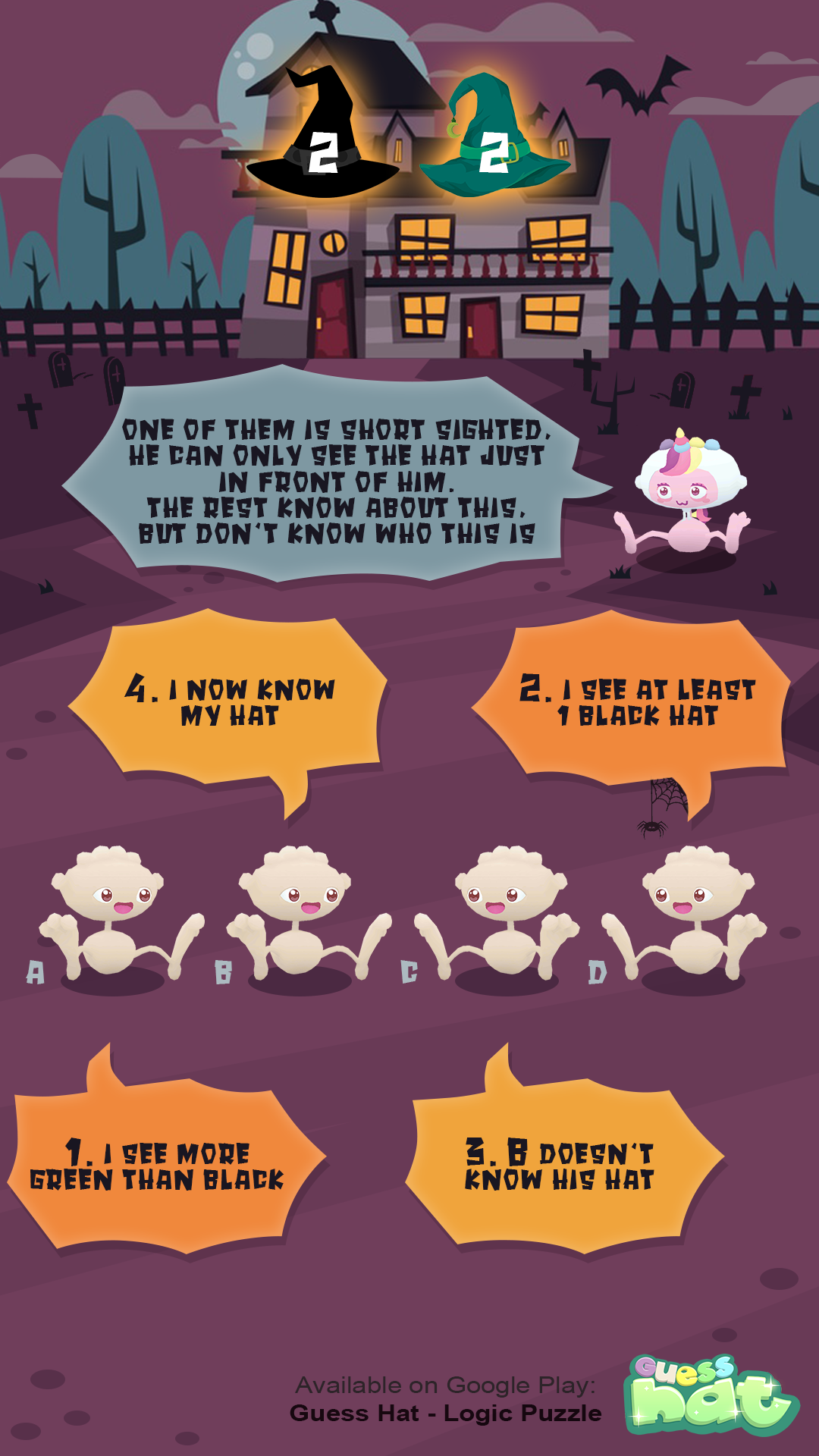 DESCRIPTION: Each one can see the hats that are in front of them, and not their own. This means:

They give tips one by one, pay attention to the order in which they speak:

1- A is the first one to talk. He sees more green hats than black ones. (This would mean he sees 2 green hats and 1 black hat, or only one green hat if A were the short-sighted one, which you will have to figure out)

3- C speaks third and says that, from what he can see and what he has heard, B doesn't know the hat he is wearing

4- Lastly, B says that only after listening to C (and not before), he can then figure out which hat he is wearing.

There are 2 green hats and 2 black hats, and all of them know this.

They know who talks, where they are sitting, and what direction they're facing.

The arrangement is BBGG, b is short sighted

If B is short sighted he knows that the rest are not. So from A's statement he would know that A is black because there are only 3 possibilities BBGG, BGGB or BGBG, all of which makes A Black.

All he sees is Green in front of him because if he saw black he would know that he was Green, seeing only Green his colour is still equivocal. So C must be Green.

D's statement does not make it any clearer for B because it does not disclose D's colour it fits both BBGG and BGGB.

If the arrangement was BGGB then C would not know if it was BGBG or BGGB or if A or B or D was shortsighted. If A was short sighted then B might know his hat once A said his statement because if A was such and the arrangement happened to be BGBG then b would have known he was green from A's statement alone for if seeing BG in front of him means that regardless of whether A is short sighted or not he must be green.

If C sees BBGG he knows that A cannot be short sighted and nor could D because D sees green in front of him and he would have realised that B is short sighted, saw him as Green and so for sure did not know the arrangements of hats.

So after C says his statement b knows that BBGG is the only possibility left and so he knows that he must be Black.

I confused myself a bit on this one, but I think I have it.

Black, Black, Green, Green, and B is short sighted

Starting with A: If A was shortsighted, then B must be green as A would see 1 green and nothing else. If A is not short sighted, then A must have a black hat, since he would be able to see 2 green hats and 1 black, so the remaining hat (his) would have to be black.

C is next, and based on what he sees and what A and D said, he can claim that B doesn't know his hat. Here's where things got a little confusing for me. First I determined B could not have green, because if his hat was green and he was not short sighted, he'd either see 1 green and 1 black, or 2 blacks. If he saw 2 blacks, he would know his hat was green. If he saw 1 and 1, then he'd know A would have had to have seen his green hat to see more greens then blacks. If B was short sighted, then he'd either see a green or a black hat on C. If he saw black, he'd know he was green (because of A), if he saw green he wouldn't know, so if he was green, and was short sighted, then C would have to be green. But C doesn't know if B is short sighted or not, so he couldn't be confident that this one situation would be true and B wouldn't know his hat.

So the solution is BBGG, and Cs statement is correct since C knows B is shortsighted and cannot exclude BGGB (before C speaks).
Note: after C speaks BGGB can be excluded because C cannot differentiate with BGBG, so Ds statement is true too.