You are given a Chess board with black and white squares.

On your final grid, a letter (actually several is also mathematically possible) will be more frequent than all the other letters. Your aim is that this letter appears as much as possible. If it appears on a white square, you score one and if it appears on a black square, you will score two.

On the next incomplete example, letter E is the most frequent, it appears 6 times. Twice in a black square and four times in a white one. So, up to now, this example scores 8. It is not complete because 25 squares are empty on bottom right and 10 are also missing on bottom left. 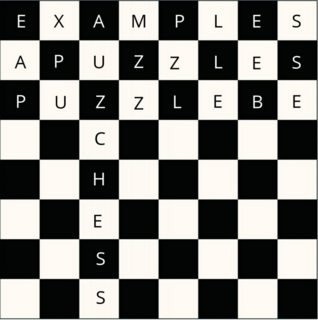 Note that the different words used on this example are:

Examples, A, Puzzles, Puzzle, Be and Chess.

Which grid with highest score can you find?

The rules of the question state that:

On your final grid, a letter (actually several is also mathematically possible) will be more frequent than all the other letters. Your aim is that this letter appears as much as possible.

If we interpret this to mean that all letters appearing with the greatest frequency contribute to the score then it is possible to achieve:

the maximum score of 96! 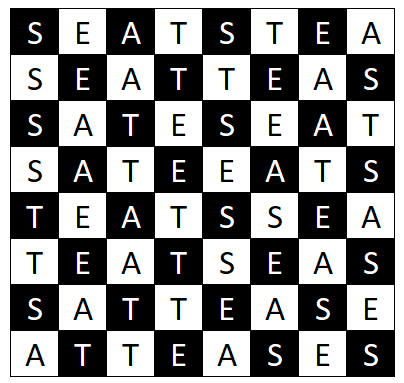 Here, the letters A, E, S and T appear with equal (and greatest) frequency - 16 times each. Under this interpretation of the rules, every space scores points! With 2 for a black and 1 for a white, that makes 64 + 32 = 96 points total.

The words in the diagram above are:

All are common dictionary words.

To start things off, here's one with a score of 70 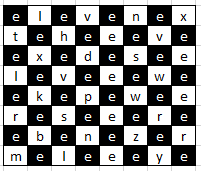 Not the answer you're looking for? Browse other questions tagged optimization english checkerboard word-search or ask your own question.