This is the fourth Chain Puzzle in the Tabletop Games series, in which all puzzles are themed around board games, card games, tile games, and the like. The answer to this puzzle is a thematic word or phrase. The solver whose answer is awarded the green checkmark has first refusal on the opportunity to create the next puzzle in the series, which must somehow incorporate the answer to this puzzle somewhere within its construction. The solver is under no obligation to create the next puzzle - in the event that the solver does not wish to take up this opportunity, the puzzle's setter may take up the offer of a willing substitute setter or choose to continue the chain themselves.

Six guests, Miss Scarlet, Mr. Green, Colonel Mustard, Professor Plum, Mrs. Peacock and Mrs. White were invited to a party hosted by Mr. Black in his mansion. You're a detective that has to solve the murder case which occurred during this party, or shall I say, the murder cases? All of the people who participated at this party are dead, including Mr. Black.

There are multiple oddities scattered around the mansion. It's almost as if the killer wants us to find out what exactly happened! Which is why we can secretly assume for the sake of this puzzle that there was only one killer, and that killer was one of the people mentioned above (which also means they killed themselves at the end of it).

Your job is to find out

Which game the killer wants you to play at your next game night!

Here are the case files:

Colonel Mustard was found dead in the hall. Beside him, an oddly arranged set of weights lied on the floor (shown below), accompanied by a note that reads My choice of weapon was easy for this one: Take an australian piece of wool and ship it to a country in Europe.

Mr. Black was found dead in the library. He appeared to be reading a book called "Army N", accompanied with note that reads I twisted and moved this xenophobic, vain, irritating idiot down the drain with guidance.

Mrs. Peacock was found dead in the ball room, accompanied by a note reading IXCRAJEOUWBYFLPHNSZQMKTDGV and a further note that reads She died due to a logical conclusion

Fixed error above in edit - Was mostly cosmetic

Miss Scarlet was found dead in the lounge. There was simply a note reading She didn't feel like it, but I didn't either, so I made her do it.

Professor Plum was found dead in the dining room. An odd arrangement of bottle caps were placed on the table (shown below), accompanied by a note that reads That monkey was really enjoying nasty christmas ham. 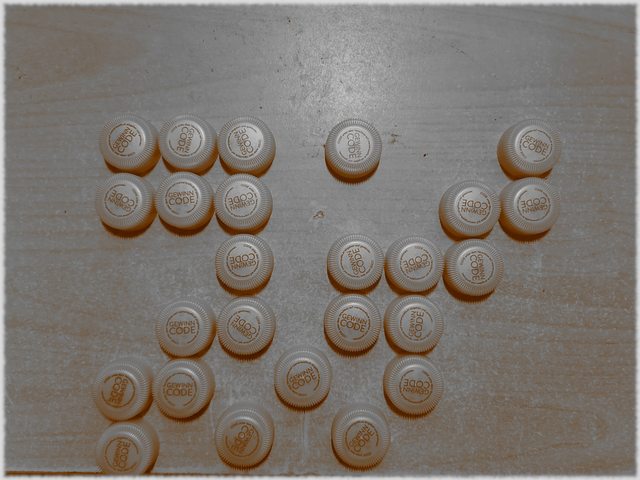 Mr. Green was found dead in the billiard room. A small table seems to display an ongoing game of Blackjack (shown below), accompanied by a note that reads I let him play a better game with higher stakes. 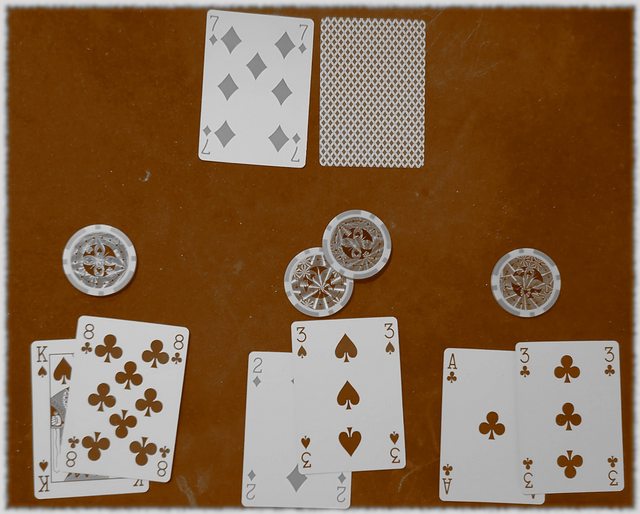 The answer to the previous puzzle (which provided the theme for this one) was:

Personnel: This perplexing case was investigated - and solved - by a team of crack sleuths in the Chain Puzzles chatroom. Contributions are acknowledged where credit is due, with a particular hat-tip to Sergeant Braegh, whose keen eye and perceptive mind were incredibly useful on multiple occasions.

Background: Call at 7:30am from local postman. Seven bodies discovered at the mansion of Mr Black, suspected typical sextuple-murder-suicide (sadly rather common round these parts these days).

We began our investigations in the dining room. While I examined the body, which was lying in a pool of blood on the floor, Sergeant Braegh observed that a quantity of bottle caps had been arranged on the nearby table in a specific pattern. "It's Braille," said he, "and it spells GLUTTON."

This was not welcome news, as a hypothesis immediately presented itself to me. "Egad!" I exclaimed to the Sergeant. "If I'm not much mistaken, this could be another 'Seven Deadly Sins' copycat crime. I suspect we may shortly find that all of the victims have some connection to specific Deadly Sins." (Namely: Envy, Gluttony, Greed, Lust, Pride, Sloth and Wrath.)

"I suspect you might be right, Inspector," said Sergeant Braegh. "And I've found the murder weapon." Carefully, the Sergeant produced a WRENCH from inside a nearby pot plant. His suspicions had been drawn by the mention of the word 'monkey' in the note found beside the body, and further corroborated by noting that the initial letters of 'was really enjoying nasty christmas ham' spelled 'wrench'...

We moved into the hall. Another body lay surrounded by blood - that of the Colonel, an old colleague of mine from my military days. Not far from his body lay a selection of gym weights, whose arrangement seemed far from accidental. Once you've worked in the military, you never forget Morse code, and it was clear to me that the sequence of weights and bars spelled out '.-.. ..- ... -' or LUST to the layman.

Without wishing to disturb the scene before Forensics arrived, I observed the body from several angles until I eventually spotted a stab wound. The poor Colonel had been killed with a DAGGER, indicated within the nearby note by clues to DAG (an Australian farming slang term for excrement-covered wool) and GER, for 'Germany'.

The door to an adjacent room was open and we passed through, finding ourselves in the billiard room. The body of the disgraced former reverend was slumped beside an unfinished game of cards. I examined them for clues and once more found a craftily concealed message...

The values of the upturned cards among the four pairs were 7, 18 (King + 8), 5 (2 + 3) and 4 (A1 + 3). What's more, while the other cards were each accompanied by a single face-down card or betting chip, the 2-3 pair were next to two chips. Knowing that if A=1 and B=2 etc. these numbers could be converted using their positions in the alphabet to G, R, E and D, the use of the double-chip meant that two E's were required. Altogether, this spelled GREED.

(I also noted a crafty red herring - if the Ace were instead to be valued as 11 (its other possible value in blackjack), the 4 would become 14, the equivalent of 'N', thereby spelling 'GREEN', the name of the murdered man, instead...)

"He's been shot, sir," came Sergeant Braegh's voice from over my shoulder. "There's a REVOLVER. I suspect the note's remarks about 'a game with higher stakes' implies that Mr Green lost a game of Russian roulette."

Proceeding into the library, we found a fourth body, this one clearly bludgeoned with a blunt instrument of some kind. Picking up the note that lay upon his book, I spotted an unusual frequency of initial letters that were also Roman numerals - the inclusion of the phrase 'xenophobic, vain, irritating idiot' appeared to be noteworthy, representing as it did the Roman numerals 'XVII' for the number 17.

I made a remark to this effect and Sergeant Braegh made the natty observation that the title of Mr Black's book - 'ARMY N' when translated by a Caesar shift of 17 became the letters 'RIDP E', an anagram of PRIDE!

What's more, the Sergeant proceeded to locate the murder weapon concealed among the bookshelves - a piece of LEAD PIPING, as he had apparently suspected by duly noting that the use of 'down the drain with guidance' in the note clued the words 'PIPING' ('down the drain') and 'LEAD' ('guidance'), albeit with the latter pronounced differently.

The body of Miss Scarlet was discovered in the lounge. The note beside her ("She didn't feel like it, but I didn't either, so I made her do it.") explained everything, with the Sergeant and I in agreement on the details - that the murderer had taken Miss Scarlet's life for reasons of SLOTH ('didn't feel like it'), and that it was under duress that the unfortunate Miss Scarlet had been forced to hang herself ('I made her do it') using the ROPE around her neck. It was not a pretty sight.

Stepping into the conservatory, we found the body of Mrs White sprawled upon the cold tiles, her head caved in with a CANDLESTICK - the only weapon outstanding from the weapon set in a game of Clue(do) ('The one which hasn't been used yet'). After a little thought, I managed to decode the note beside her body, noticing that at 51 characters long the message could be arranged into a 3x17 block. Upon so doing, the message became clear:

There amongst the O's, the pattern traced out by the X's could clearly be seen to spell the word 'ENVY'.

We knew by now what remained - of the Seven Deadly Sins, the only one we had not yet encountered was WRATH. Yet, of course, we had been encountering it throughout the investigation! Every single one of these murders had been committed out of wrath, out of anger, rage, fury - call it what you will. And upon arriving in the ballroom, we found the body of our murderer, Mrs Peacock.

It was easy to deduce that having committed these horrific crimes in a haze of puritanical fire, Mrs Peacock had taken her own life out of remorse - 'a logical conclusion' indeed. And there, in her hand, one final note - 26 letters long, none repeating. I recognised it for a key to a code, and sure enough it helped us to decode one last message...

The evidence of our police doctor put the times of death in the following order: Mustard, White, Black, Peacock, Scarlet, Plum, then Green, suggesting that many of the victims did not finally breathe their last breath until after their villainous murderer. Certainly this is the order that has been repeated ever since in newspaper reports and articles. By considering the Deadly Sins for which these people had lost their lives in the same order, this gave us the sequence Lust, Envy, Pride, Wrath, Sloth, Gluttony, Greed. Taking their initial letters produced the codeword LEPWSGG.

All of this murder, all this violence, this cruelty, this unnecessary loss of life.. for a dice game?! Who can fathom the twisted machinations of a mind so bitter and warped? We do not yet know where this dice game is due to be played, who is to be involved, and what is at stake, but as soon as this report is filed I guarantee you one thing - I'll be on the case...

Not the answer you're looking for? Browse other questions tagged enigmatic-puzzle visual mystery or ask your own question.