Does a systematic way to solve a magic square made up of domino pieces exist?

I've found this problem in an older book which goes by the name of Logical aptitude circa 2019. It doesn't list any other markings. The thing is no matter how I attempt to look into it, I'm trapped in circles as I have no idea on how to approach this problem.

The figure from below shows a set of different domino pieces. By using only 4 of these pieces you can make a 4x4 magic square. Find the sum of the dots situated in the diagonal of the magic square.

I've went to the source again and it doesn't give any other details or conditions for this problem. However from looking other similar problems which I had solved, the intended approach is that some squares will be left blank and its only allowed to use the pieces once.

The alternatives given in the sheet are as follows:

Logically what I attempted to do was trial and error. But after several attempts I couldn't come to a method to make the requested magic square.

Recalling an older classes on this particular subject I remembered that Bachet de Méziriac's diamond method proposed a way to fill in the gaps of a magic square with the identity that the square in the center is the half of the sum of the two opposing vertex of the square.

By the way, to illustrate what I meant with the method. It goes as this: 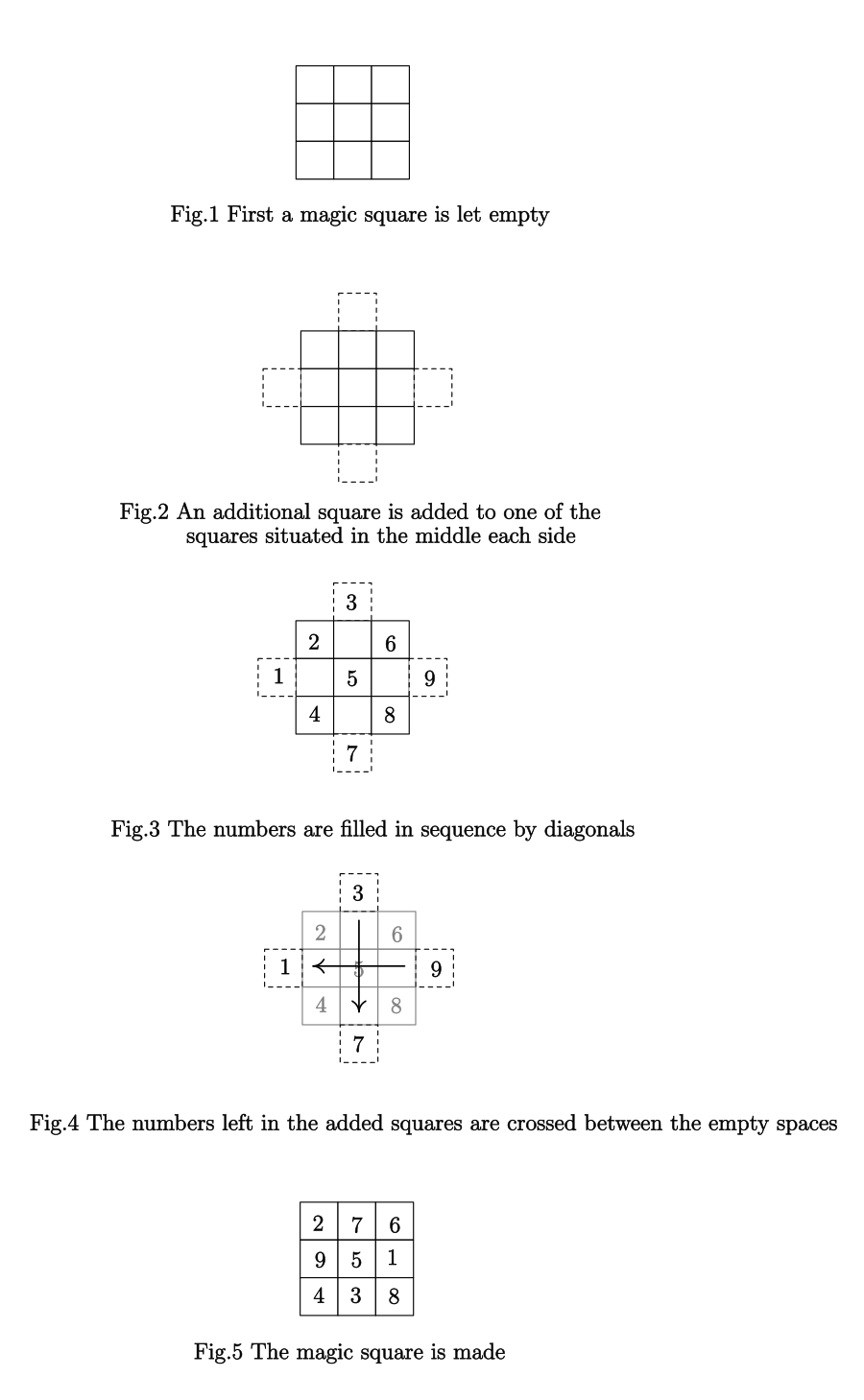 As mentioned above it seems to work using an empty 3x3 table to make a magic square but that's it. How can this puzzle be solved?. It would help a lot if an answer would contain some sort of picture or a detailed step by step analysis on how to approach this sort of question in a systematic and logical manner so I can fill in the blanks without just plugin numbers randomly.

This puzzle creator must have some very unusual definition of "magic square":

The diagonals can't possibly have the same sum as the rows and columns: if each column had 4 dots, that would come up to a total of 16 dots, and any 4-tile combination has 14 dots or fewer. So the common sum cannot be 4 or more, which covers all the answer options.

Turns out, by similar logic, that it's impossible to construct any other kind of square with the same sum on every row and column:

If the common sum were 3,

the 2-2 and 2-3 tiles couldn't be used, they would put too many dots in whichever row or column they are in. The rest of the dominoes don't have 12 dots among them.

If the common sum were 2,

again, we couldn't use any domino with more than 2 dots total, and the remaining dominoes would have fewer than 8 dots altogether.

There would be fewer than 4 dominoes we can use.

In conclusion, the puzzle is unsolvable under these rules.

From Bass's answer it seems we have to interpret the question differently. Maybe in this puzzle you can use only 4 pieces but you can use them multiple times.

This would allow for the following magic square. 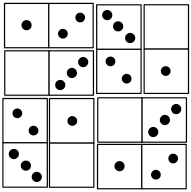 If the aim is a proper magic square where we don't repeat values in a row or column and make the diagonals sums equal the row and column sums, then the diagonal sum must be 6 regardless of how and if you can build it with these dominoes. It is more a question about basic properties of magic squares.

So I don't know whether this is the intended solution. At least it is a magic square.

Not the answer you're looking for? Browse other questions tagged magic-square dominoes or ask your own question.

15
Elegant solution to the Magic Hexagon problem
11
Does a magic rectangle exist?
21
3x3 "Magic Square" of Prime Numbers
34
Unsolved Mysteries: Magic Square of Squares
5
Magic-preserving Permutations on a 4x4 Magic Square
3
How to solve 3x3 Magic Squares with negative values when only 2 values are given?
3
Sequence of domino tiles - next term's difference of pips
4
DominoBrane - Chained Domino Fitting
1
4-DominoBrane Exclusive
8
Can you reactivate a 4x4 Magic Square?