This is a Shingoki puzzle.

An example is shown below for greater clarity. 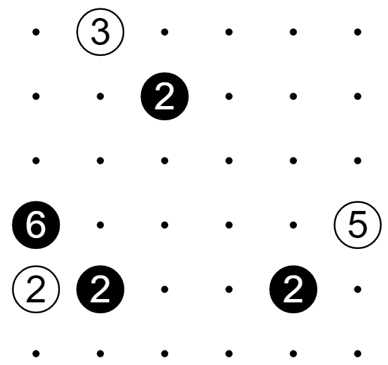 Shown below is the solution with some explanation: 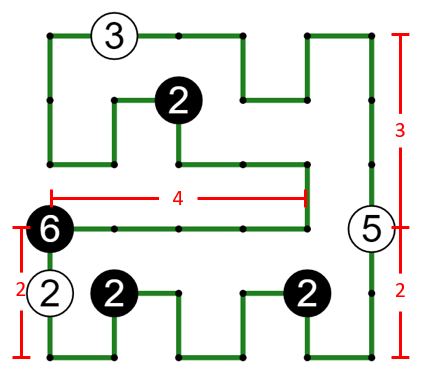 Note how the total length is calculated for the '6' black circle and '5' white circle.

The actual puzzle to solve is shown below: 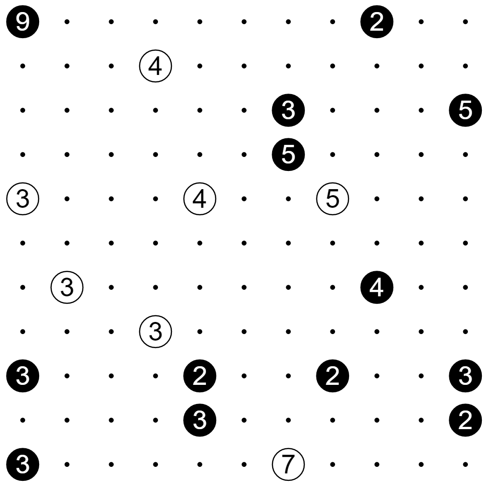 For your convenience, you may use this link, where a version of the puzzle has already been created using the penpa editor. Select "Mode" to be 'Edge' to draw the lines. 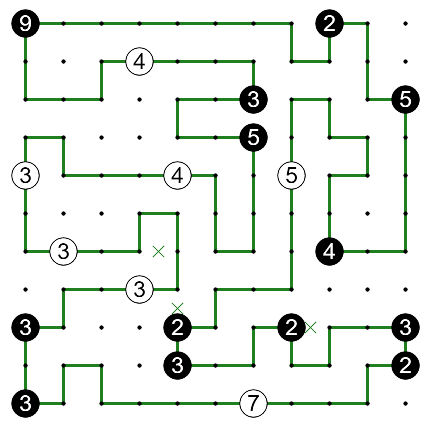 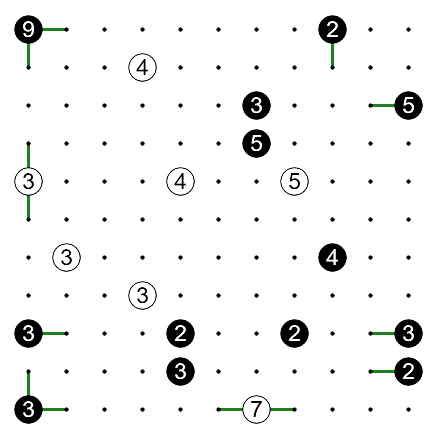 The 9 in the top-left can be fully resolved, terminating a single dot away from the white 3 below it and the black 2 to its right (otherwise these smaller numbers would be violated). The 2 and 3 can then also be fully resolved, as can the white 3 in row 7. We can also place at least 3 line segments extending through the white 4 in row 2. 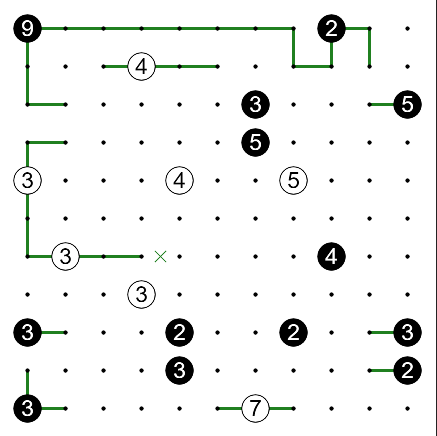 Now the black 5 at the end of row 3 can only extend at most 3 segments to the left (else it meets the line from the white 3, violating its constraint). It must therefore extend at least 2 segments down, since up is not an option (the line will end up trapped in a corner). But this means that the line snaking from the 2 in row 1 must extend down 1 unit further, meeting the line from the 5 and setting its length to 1. Thus we must have 4 units of line extending down from the 5. 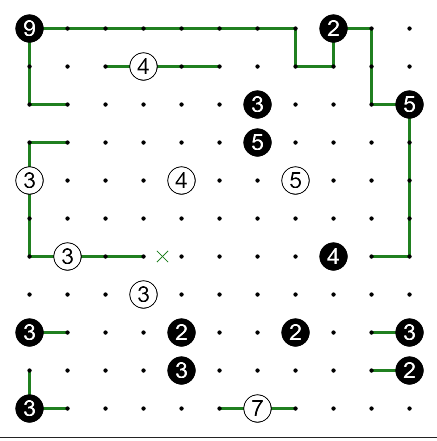 This means that the black 3 at the end of row 9 can extend vertically at most 1 unit and must therefore extend 2 units to the left.

Meanwhile, the line through the white 7 on the bottom row can also be extended at least 3 spaces to the left (since only room for 4 on its right), and at least 3 to the right (since cannot meet the line coming from the 3 bottom-left). The black 3 above it can be partially resolved. 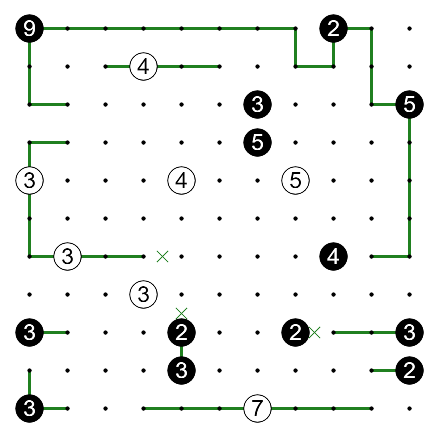 Note that the 2 at the end of row 10 can now only be resolved one way. This then resolves the white 7, the two black 3's in the bottom left, then the other numbers in the bottom-left corner section also. 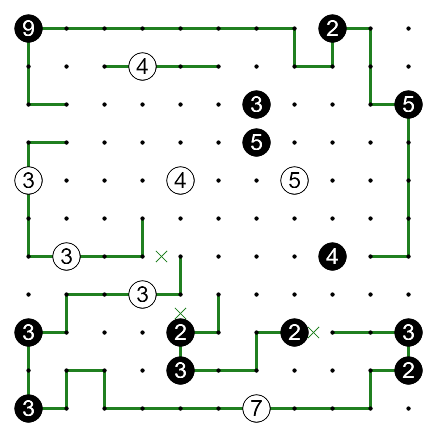 Next, note that the white 5 cannot be satisfied horizontally, or the line extends through the nearby 4 and violates its constraint. It must therefore be crossed vertically instead. To avoid violating the black 2 below it, there is only one way to satisfy it. This forces the 2 to link to the nearby black 3 and also finalises the loop passing through the nearby 4, with knock-on deductions resulting in the top-right section being fully resolved. 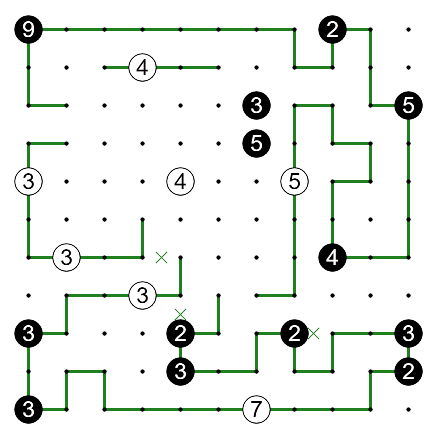 The black 3 in line 3 must now have a line extending 2 spaces to the left (it can only extend 1 either up or down). This then forces the resolution of the white 4 in row 2 and has some knock-on effects for the black 3 and its neighbouring black 5. 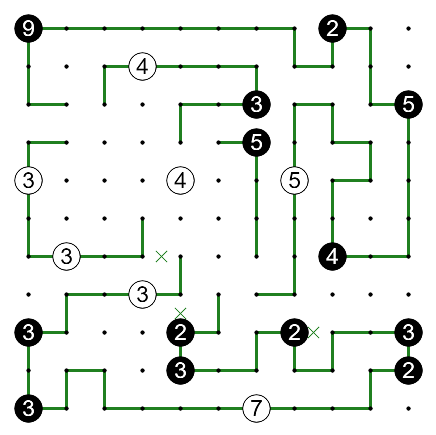 Now the white 4 in row 5 can only be satisfied horizontally. 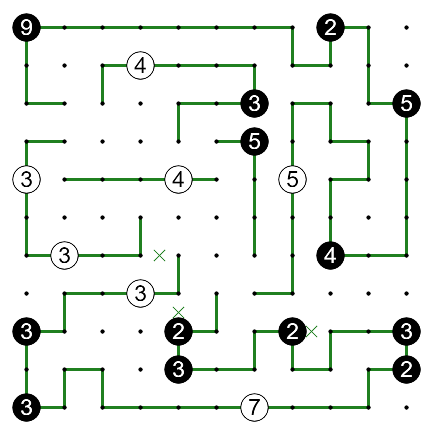 Now an interesting logical step: Consider what would happen if the black 5 were to be satisfied by extending the line downwards - we end up in an impossible position which separates the top and bottom of the grid into separate loops: 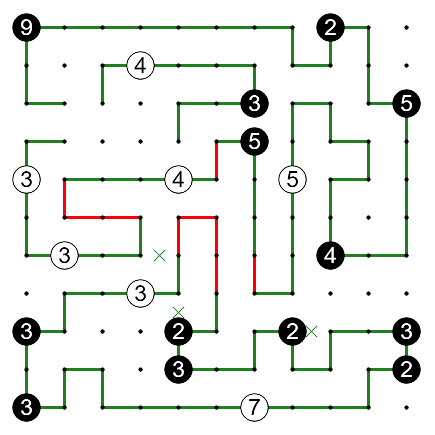 Thus the 5 must be completed using the line to the left instead. 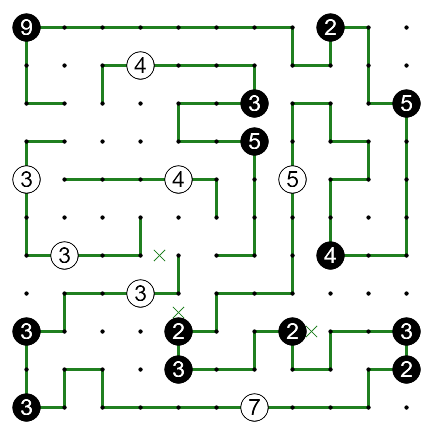 The 4 loose points in the centre must all connect up to each other to avoid dead ends. Thus the rest of the grid can be resolved: 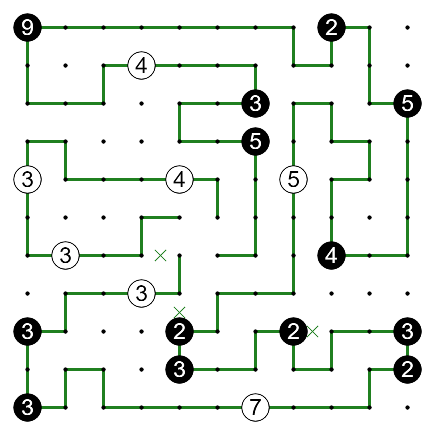 And now there is only one way to lay the last segments to keep one single loop!

The best way to solve it would be to start with the circles on the edges.

If a white circle is on an edge you must have that the line passing through it is parallel to the edge.

If a black circle is on an edge you know that a line must go into it perpendicular to edge.

Following this and a bit of deduction you arrive at solution. 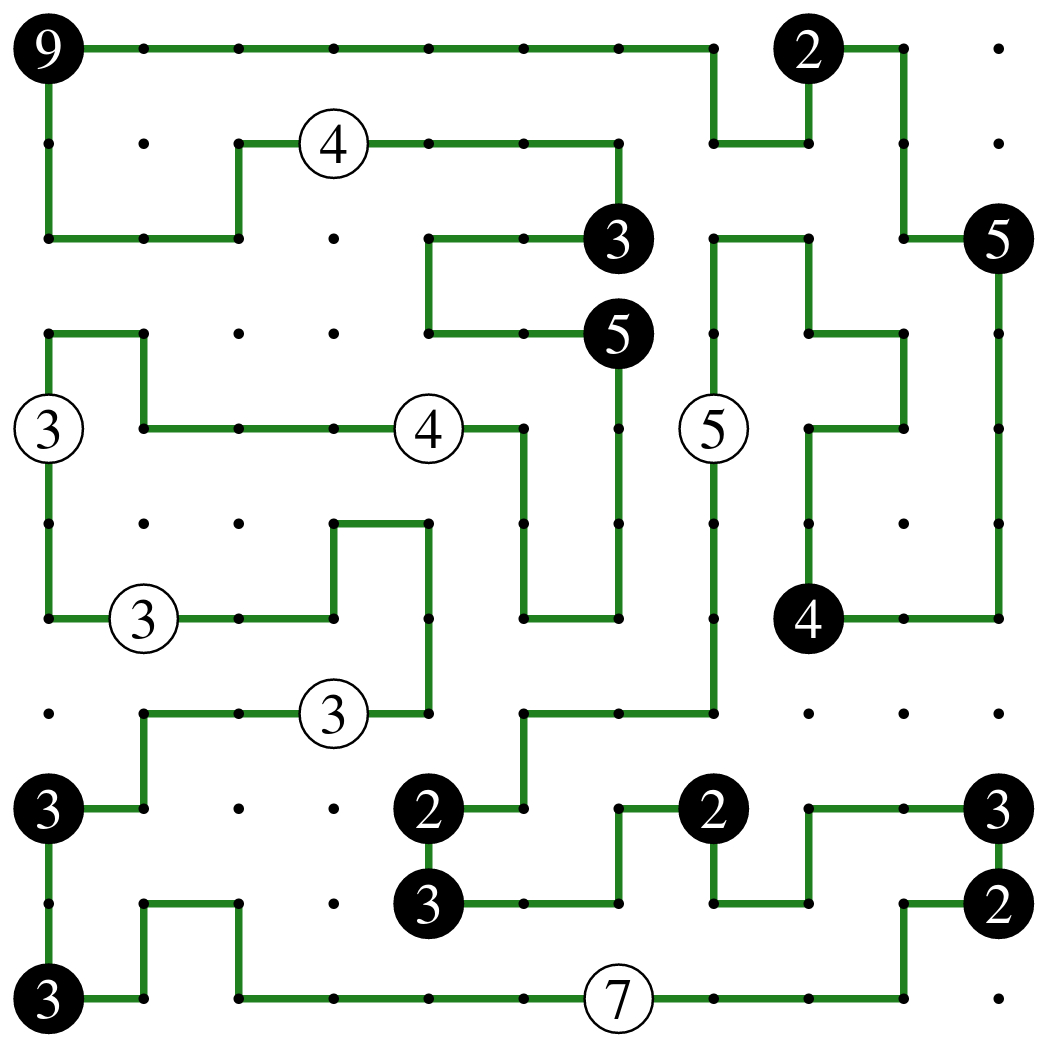