The goal of this puzzle, a hybrid of Statue Park and Cave, is to place the given shapes into the grid, subject to the following rules. As in both original puzzles, all unshaded squares must form a single orthogonally (on a side) connected region. As in Statue Park, two shapes cannot be orthogonally adjacent, and all squares with darkened circles must be in a shape. As in Cave, all squares with numbers must have that number of unshaded squares directly connected to it horizontally and vertically, including itself. A final rule inspired by Cave is that all shaded squares must be connected, orthogonally or diagonally (necessary at shape boundaries), by other shaded squares to the edge of the grid. The example below is a legal Jewel Cave grid where the set of shapes is the tetromino set. 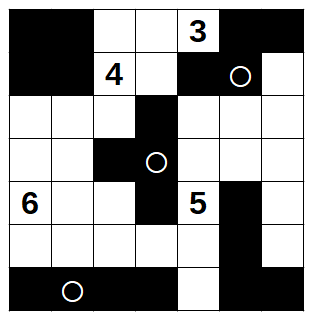 The puzzle below uses the standard pentomino set. I hope you enjoy!

Hybridizing the Statue Park and Cave puzzles is natural in the sense that both puzzles target a fairly large unshaded area that must be contiguous. But the challenge is that the targets of the two puzzles are not identical; generally a Statue Park shading will not be a legal Cave shading and vice versa. When designing the puzzle, I figured that the clues would generally be more Cave-like, so it made sense to make the shading more Statue Park-like, which is why the Cave shading rule needed to compromise. As far as the name, all of the combinations of Cave with Statue or Park sounded dumb, but Cave Park made me think of Jewel Cave National Park in the United States (OK, it's really a National Monument, but work with me here); there are more famous cave parks, but I've actually been in Jewel Cave. As a final note, I am really happy with how this came out, so ironically I'm specifically interested in any criticism, since I'll probably make some more of these (spoiler: already have two more). 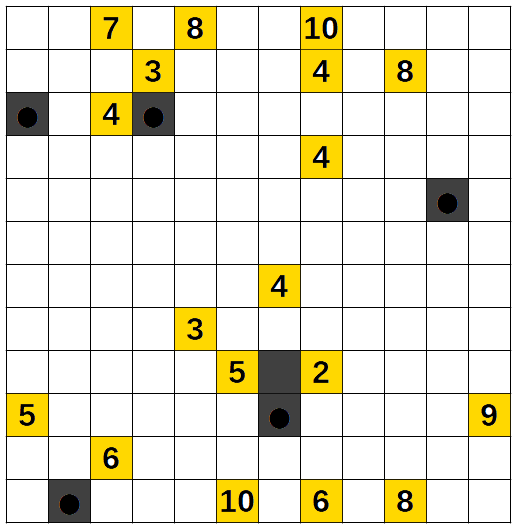 Note that we can fill in the dark grey next to '2' at the bottom since it cannot touch the '5'. 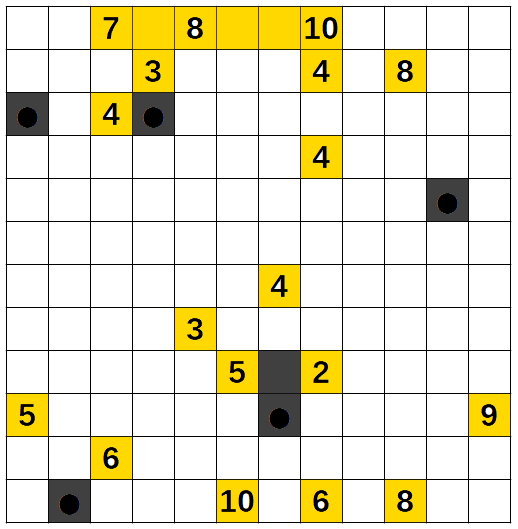 Now, we realise the '7' cannot touch the '4' since it already has 6 squares. The top left square must also be shaded black. The resulting formation gives us 'T' at the top and we can carry out some further deductions. 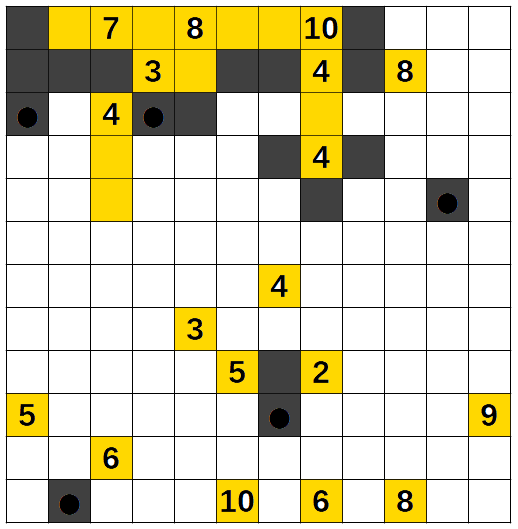 Looking at the '8' at top right, we realise some of its squares must extend downwards. Also, the dark grey cells will block the yellow cells near the '4', so to ensure connectivity, it has to go towards the '8' side. Additionally, the two cells near '4' can only be connected to the dark grey cells below '3'. Note that 'U' is also complete now. This means the pentomino above '8' must be a 'L'. This gives us 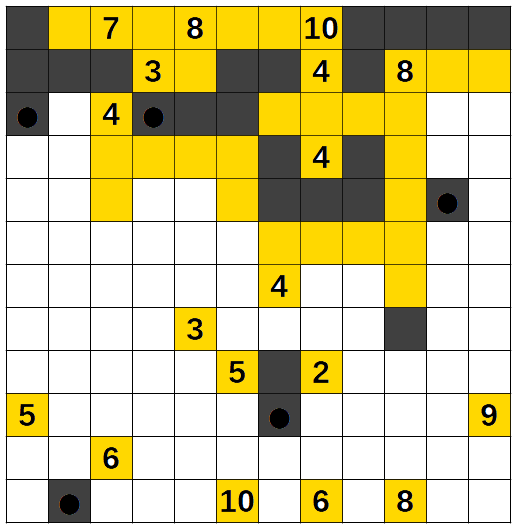 The '8' at the bottom cannot extend far enough for 8 cells, so it must be connected to the '6'. Similar logic can be applied for the '10'. Because of the '6', the '8' can only have 6 cells in the bottom row, so 2 cells must be extended in the vertical direction. This also means the bottom right corner is a grey square, since the 8 cannot reach it. Since a 'L' has already been used, the cell below '9' must be shaded. The cell to the left of '9' must be shaded as well for 5 dark grey cells. This gives us 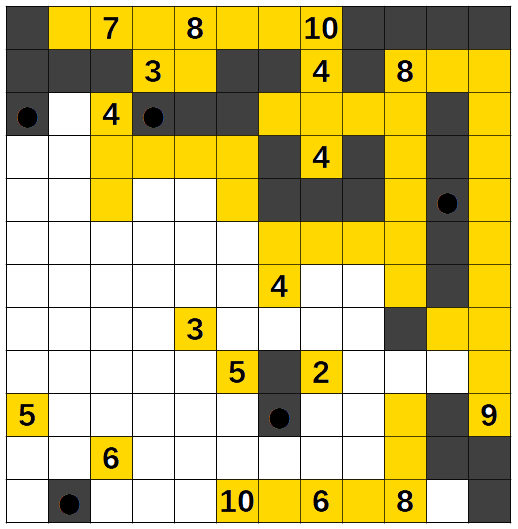 The '10' can have only 6 cells in the bottom row, so it must extend 4 cells upwards. This completes the '5'. Then, there is only one way to complete the '4' in the middle, and this actually leads to a chain deduction where we fill in the 'W', 'F' and 'P' pentomino. 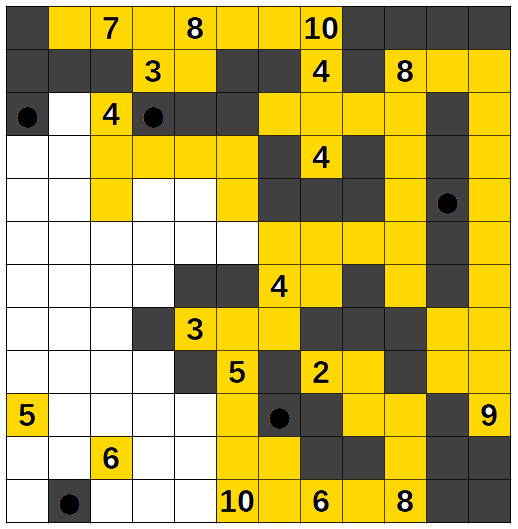 Filling in a few additional squares gives us 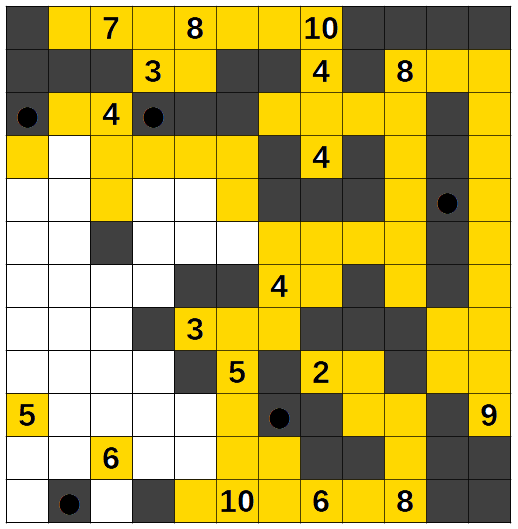 Now, the cell in last row, column 4 cannot be connected to the cell near the '3' and '5'. Thinking about it further, the only shape that can fit in there is the 'X'. There can only be a 'V' or 'y' near the bottom left. This information allows us to complete a few more squares. 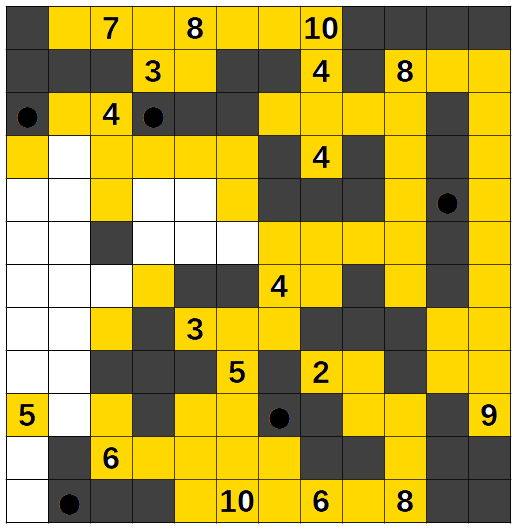 The pentomino near the '4' can only be a 'Z' and we need a 'V' in the right orientation to restrict the '5' at the bottom left. This allows us to complete the puzzle. 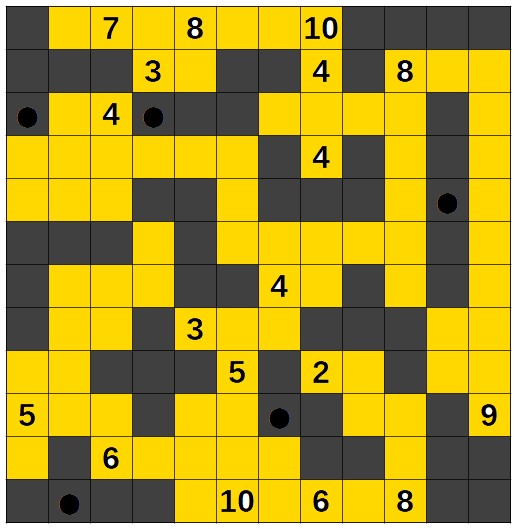 Cave clues by themselves can get us this far: 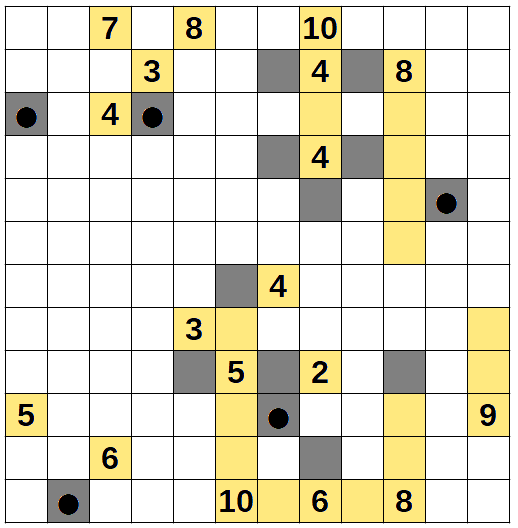 Since the shaded cells need to be in pentominoes,

we can't cut off the bottom right corner, so the 9 cannot go left. Also, the single cell at the top trapped in the 7-3-8 clues cannot be shaded. This gives some more Cave progress: 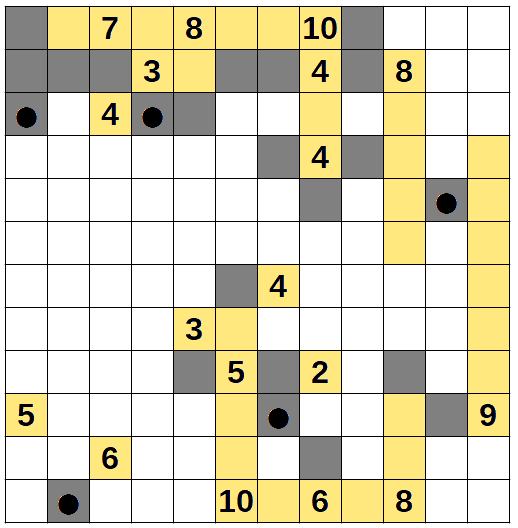 Time to do some actual Statue Park thinking!

The region in R2C7-8 must be an N -- if it doesn't extend in that one cell that would need to be added, it would either block off a cell or make a shaded region too big.

The bottom-right region must be a P, because at least one of the bottom two cells must be shaded. We can also make progress in the top right. 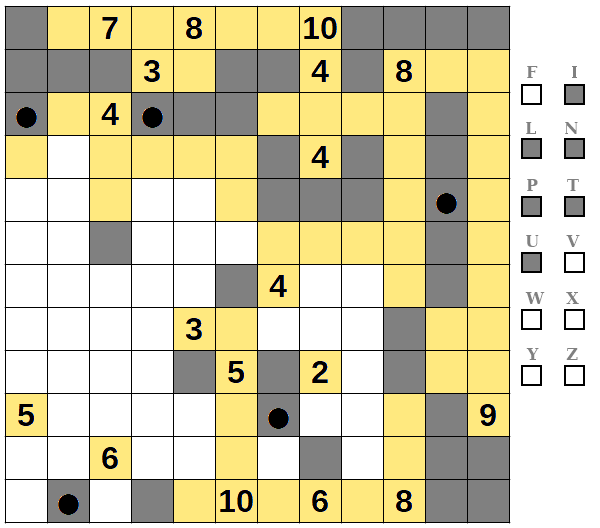 Now the path to the end of the puzzle is very smooth: 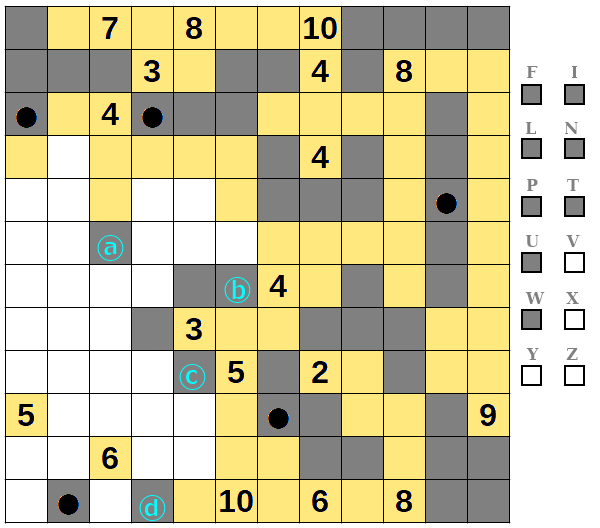 Since we've used up our L and N already, all of ⓐ,ⓑ,ⓒ,ⓓ must be distinct. ⓑ can only be Z, then ⓒ can only be X (because if it was Y it would make another pentomino). And finally, to block off the 5 from seeing all of the left column, we need ⓐ to be V, and ⓓ to be Y.

And then we have the solution! 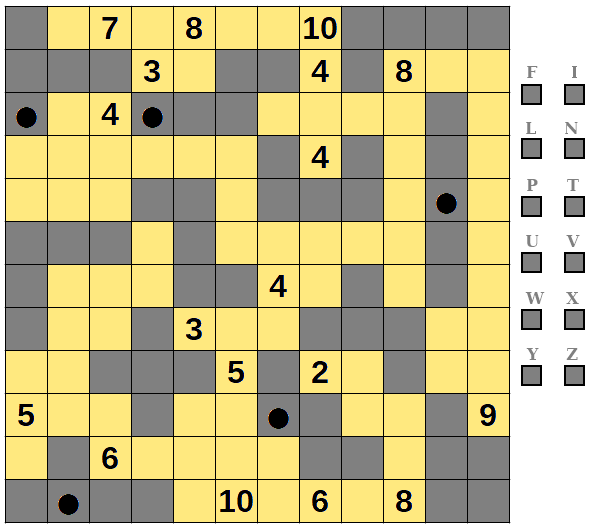