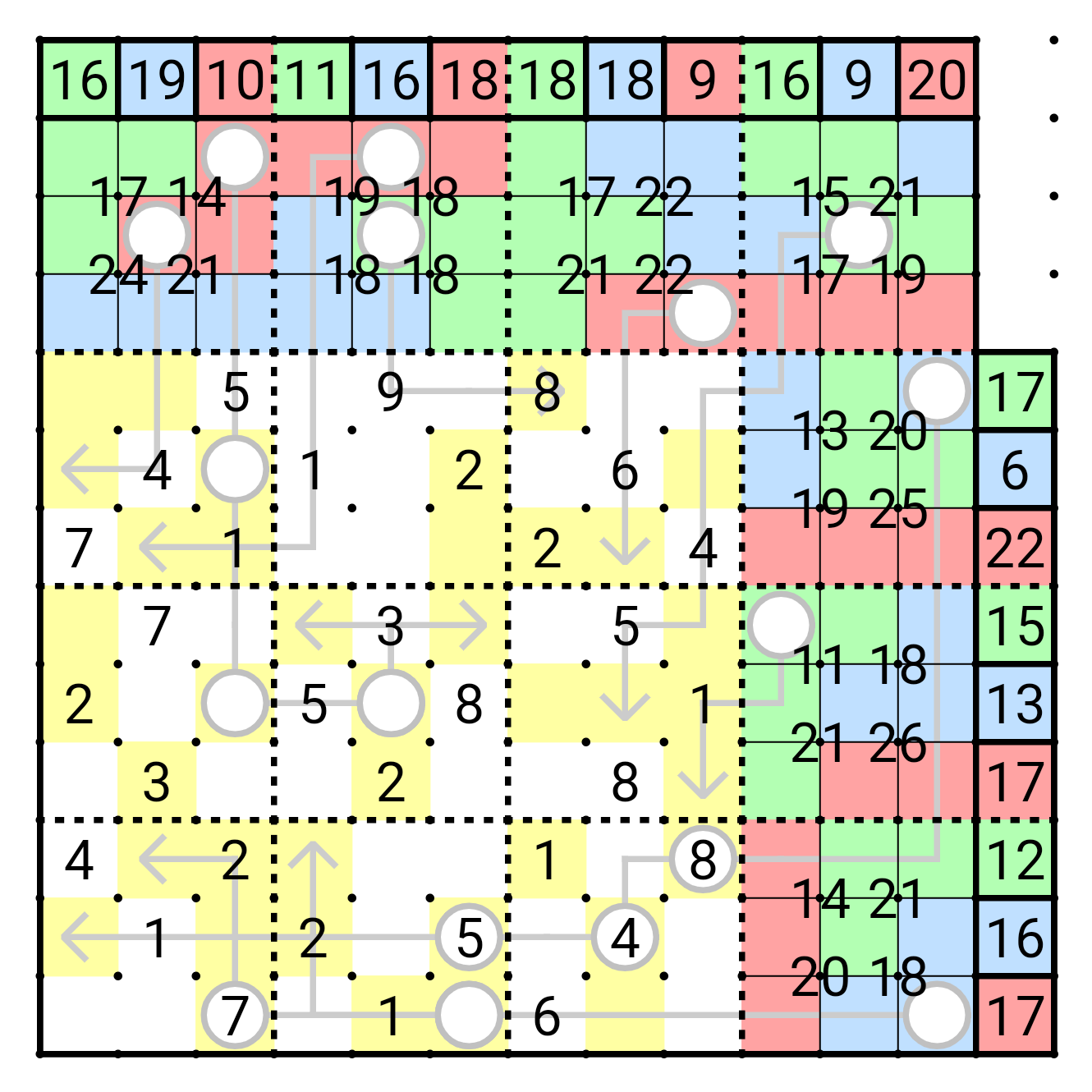 Rules for each puzzle:

Sudoku: Each column, row and 3x3 region must contain the numbers 1-9 once, and only once.

Quadrant totals: These are the numbers given in the circles inside the grid itself.

Layout totals: There will always be three different colours for the cells in each puzzle. The numbers above the grid tell you what these should add to.

Slitherlink: Draw a single loop around the grid so that all the clues are satisfied. The clues tell you how many of its four sides are part of the loop.

Okay, I believe I have a solution. Resolving the sudoku and suko puzzles produces this grid: 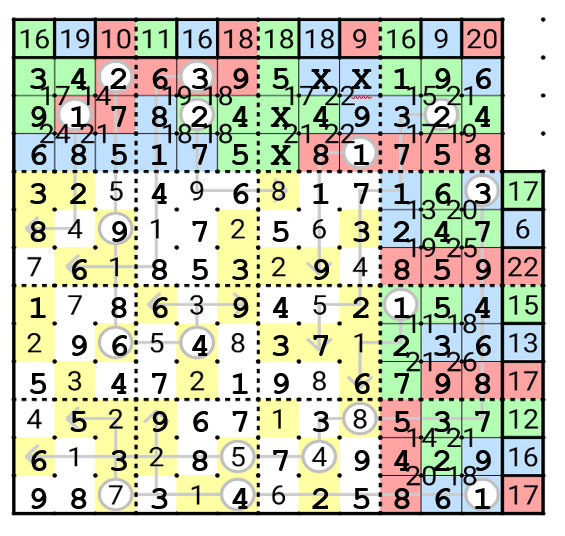 To understand how to solve a suko puzzle, here is an example using the one level with the top row of the sudoku. The aim is to use the numbers 1-9 once each to fill the 9 spaces so that the sum of each sub-square of 4 digits equals the number they surround, while the sum of numbers of the same colour equals the number indicated to the side... 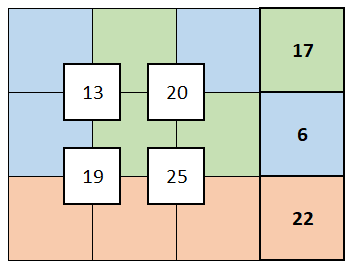 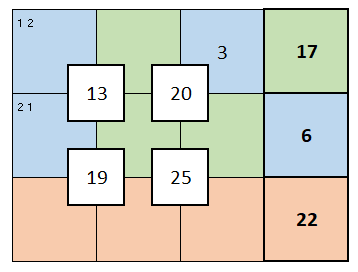 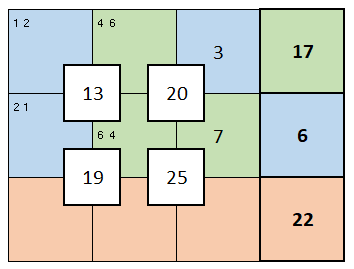 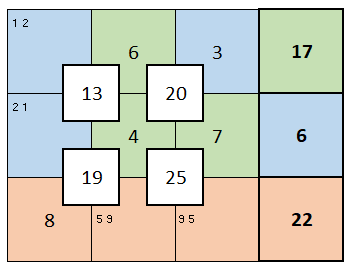 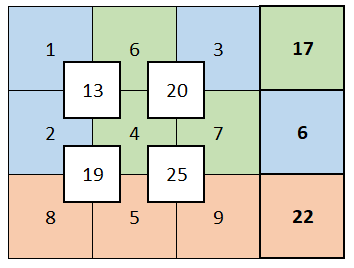 If we then interpret the rules as per my comment on the question, for any square in a suko puzzle which contains a circle, that circled number must be input into all of the other circles it is chained to, and in the yellow square at the end of its arrowhead. (I realise that can be confusing.) The resulting slitherlink for us to solve is then: 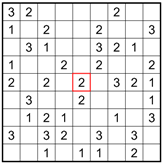 This is actually quite tricky, but there is a logical path to its solution, albeit one which requires a lot of x-steps-ahead thinking:

(i) First the usual slitherlink 'ins' involving 3's.
(ii) To satisfy the 2 on the bottom row and both 3's, the loop must path beneath the 2.
(iii) We can also add a few short sections of path elsewhere in the grid. (Bottom-left: that segment must be filled to avoid forming a loop restricted by the first 1 on the bottom row. Top-left: Segment below 2 must be filled regardless of which of the remaining sides of the 3 is correct. Top-right: Segment on edge above the 2 must be filled due to restrictions form the 1's below.) 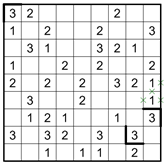 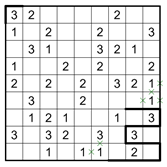 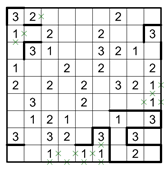 Both 2's on the right must be passed along 2 sides forming the NE-SW diagonal. This helps force two sides of the neighbouring 3, then the 2 to its NW, and then spaces continue to fall until the top-right section is complete. 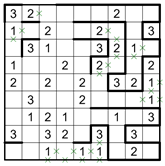 (i) Now for some conditional thinking. The segment to the left of the 2 in row 8 must be part of the loop regardless of which of the other sides of the 2 is filled. Furthermore, if we try to pass the 2 in row 8 on its right-hand side we eventually reach a scenario where the first 1 in row 7 needs 2 lines - a contradiction.
(ii) Thus, this 2 must be passed to the south. This has knock-on effects up most of the left-side of the grid. 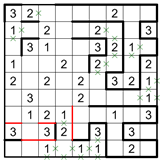 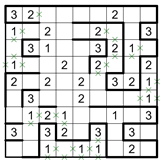 (i) Now consider what would happen if the first 2 in row 2 was passed to the north. We would end up forming a closed loop - not allowed.
(ii) Thus it must be passed on the left instead. 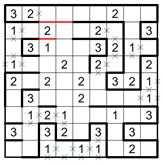 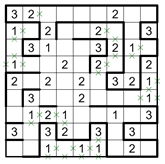 (i) What about the 3 in row 6? If we pass it on the right we contrive a situation where the 2 in the first column has a loose end that cannot be satisfied.
(ii) Instead, we must pass it to the south. 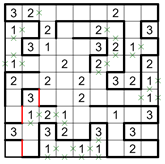 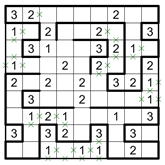 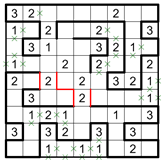 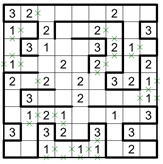 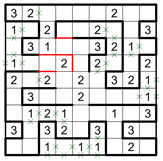 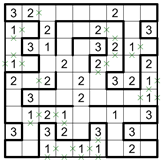 (i) Finally, note that the first 2 in row 4 must have 4 connections, including one either above or to the left of the top 2 in column 5. If it goes above the 2, we force a situation which leaves a stray segment below it.
(ii) Thus we pass it on the left instead, and there is only one way to complete the grid without breaking the loop. 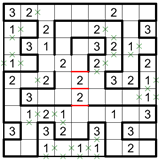 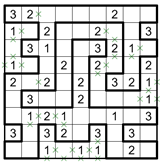 Not the answer you're looking for? Browse other questions tagged grid-deduction sudoku slitherlink or ask your own question.