You have probably encountered the mini puzzle in various games where you have a set of switches and a set of lights (or other triggers), such that each switch "flips" the states of one or more lights ("on" becomes "off" and vice versa). You normally proceed through the puzzle by turning on all the lights. Both the switches and the lights have an initial state that's often a mixture of "on" and "off", and that it's not necessarily that turning off all the switches also turns off all the lights. You don't know which switch controls which set of lights at the beginning.

While the minigames you've seen often consist of 3 to 5 switches and lights, this time it's a generalized question. There are $S$ switches and $L$ lights in front of you, under a mixed state of "on" and "off". You have been told that there exists a combination of switches that could turn on all the lights (the solution is not necessarily unique). How many steps (flips of switches) do you need for some $S$ and $L$, to guarantee that you can turn on all lights (reach the "solved" state, not just finding the solution)?

First, an important thing to know:

And you also only need to flip each switch at most once -- if you flip it twice, it's the same as not flipping it at all.

it's possible that the same thing happens -- but this time, the first (S-L) switches you try do nothing, and the remaining L switches are set up as before. So you need to flip all S switches to find the one you need, then turn off L-1 switches.

This shows that it's possible to have a switch configuration that forces S+L-1 moves -- but can we be forced to do more? The answer is no: all configurations will require at most L moves to get to the goal situation, once you figure out what the switches do and flip all of them. (This is explainable using linear algebra over 𝔽₂; I will try to explain for people who don't have any mathematical background. If you already know what "linear algebra over 𝔽₂" means, you can skip to the block labelled "So, what does this tell us?".).

Time for some math!

Make a big chart of which switches affect which lights. For instance, you might have this situation, with 8 switches and 5 lights. 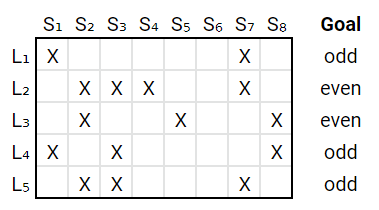 So, a 'victory' comes from picking some of the columns to activate -- that is, some of the switches to flip -- so that the total count of Xs in each row matches the goal. 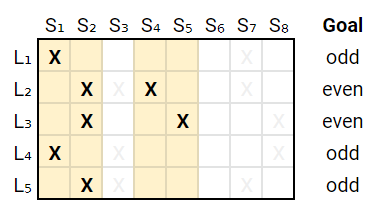 Here's one example victory: we've switched lights 1, 2, 4, and 5. The number of Xs in each of those rows matches the condition on the right, and so we've won. L₁ has one flip, which is odd; L₂ has two flips, which is even; and so on...

(It happens to be the case that all the 'odd's were 1 and all the 'even's were 2, but this isn't necessary. They can be any even or odd numbers.)

Now let's look at a set of switches. There's an interesting question we can ask: if we just had those switches, how many configurations could we reach?

Your first thought might be is "if we have n switches, we can always reach 2ⁿ configurations". But this isn't true: say we just had access to switches 2, 3, and 8. 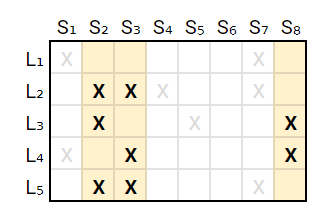 Flipping 2 and 3 together would be the same as flipping 8! Both of the results would turn on just lights 3 and 4.

So, even though it looks like we have access to 3 switches, we effectively only have access to 2. We can take one of these switches out without changing what we can accomplish.

We say that a set of switches is independent if there are no redundancies like this. The rank of a certain set is the "effective" number of switches we have.

Now, the important fact: The rank of a set of switches can never be more than the number of lights they affect. (Convince yourself of this using the example: If you could find 6 different switches from this set that all worked independently, then you would be able to get 64 different configurations of lights from just those switches -- but there are only 5 lights, so you can only get 32 configurations total!)

So, what does this tell us?

And either way, we can do it in S+L-1 flips total!

Not the answer you're looking for? Browse other questions tagged mathematics lights-out or ask your own question.

3
Connecting 3 circular power timers to lights so that they turn for one day on Christmas
6
Lights in the theatre
5
The Unknown Prison of Unknown Size
9
Christmas light horror story!
10
Lights out game on a chessboard
3
Puzzle - Turn all the lights on
4
A generalization of the lights-out problem