You are a spy trying to find out the job of a man named John. One day, you go up to John's friend, Joe. You tell Joe that if he doesn't tell you what John's job is, you will destroy him. Not wanting to die, Joe says "OK", but there is one rule - decode this message, and you will find his job. You are given a sheet marked 'Table' that reads the following:

He then gives you another sheet marked 'Path', which reads as follows:

Uri worked out the path. I'm now going to give you a clue as to what the path means. The path actually tells you how to move about the table. So, 'l' is 'move left', 'r' is move right, 'u' move up and 'd' move down. Now you just have to decipher the table...

The table is encrypted by converting letters to their respective hex code. This hex code is what a PS/2 keyboard sends to a computer. The computer then decrypts it, and turns it into a nice strong of letters. Come on, this is a BIG hint, so hopefully now someone will get it. If not, I'll be adding another hint soon!

Thanks to the BIG hint, John's job is:

a mechanic. The path encoding uses hex scan codes for a PS/2 keyboard so path directions use the arrow keys: left=6B, down=72, right=74, up=75 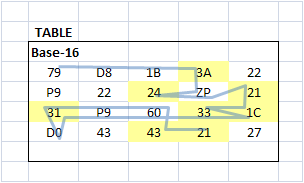 Here's an explanation of my progress so far.

1. Four unique strings suggests a sequence of compass directions (udrl/nsew) to help us pick out characters in the grid.
2. There are 7 hyphens and 12 commas, suggesting that letters are separated by the former rather than the latter.
3. Starting at the top-left edge, there is only one way to interpret the directions such that we stay within the grid throughout: 74 must be right (since there are 5 of these with at most one reverse between them), 6B must be left (since there are 4 in a row), 72 must be down and 75 must be up.
4. The path is therefore: rrr-dl-rr-dl-r-llll-durrd-r.

But why? Interpreting the values as hex (see @Len's answer) we get L=106, D=114, R=116, U=117 (or possibly WSEN). This is clearly not ASCII or any other lexicographic encoding (including mod-26). Neither does it correspond to the qwerty or dvorak keyboard layouts, or character positions in the question itself (with or without punctuation). The fact that one value is far from the others implies that the encoding is connected with the letters rather than the meaning of the letters (e.g. arrows). A potentially useful hint from question comments is: "It's not ASCII, it's a different set of computer codes"

The range of these values is 52, so again is unlikely to be lexicographic; @Len has also checked shifted mod-26 and shifted absolute diffs. The numbers lie in two ranges plus two outliers: 28-36, 49-58, 67 and 15. One or both of the outliers could be punctuation.

13
A Quote from what Movie?
10
What is the password to the diamond temple?
3
Lost in Translation: The Test
4
Dungeon Crawler: Level 3
15
Decipher the clues, escape the prison!
24
A weird website
15
Don't Be Afraid Of The Dark
4
Substitution cipher for your amusement - a programming challenge
2
The "Jumbled" Cipher
4
Cipher: First time