Billiard table: how many sides touched?

On a billiard table of 1 by 2 meters lies a billiard (snooker) ball, with a diameter of 52.5 mm, separate from the sides. It is pushed away without effect and then it rolls 3 meters. How many times could the sides of the table have been hit at the most?

Here is a path that touches 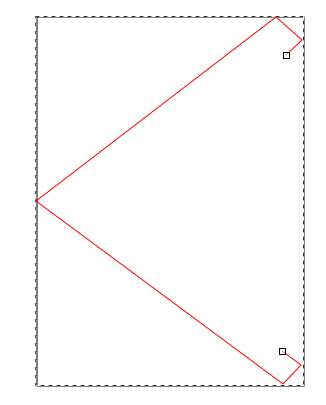 You can calculate the length of this path as follows:

To solve this kind of problems, you can

draw a grid of rectangles of size $2\times 1$, and try to draw a straight line of length $3$ that intersects as many grid lines as possible. With the help of a comment by @boboquack, the problem can be stated more rigorously. Starting from a corner is optimal (see proof below), so we may start at $(0,0)$: 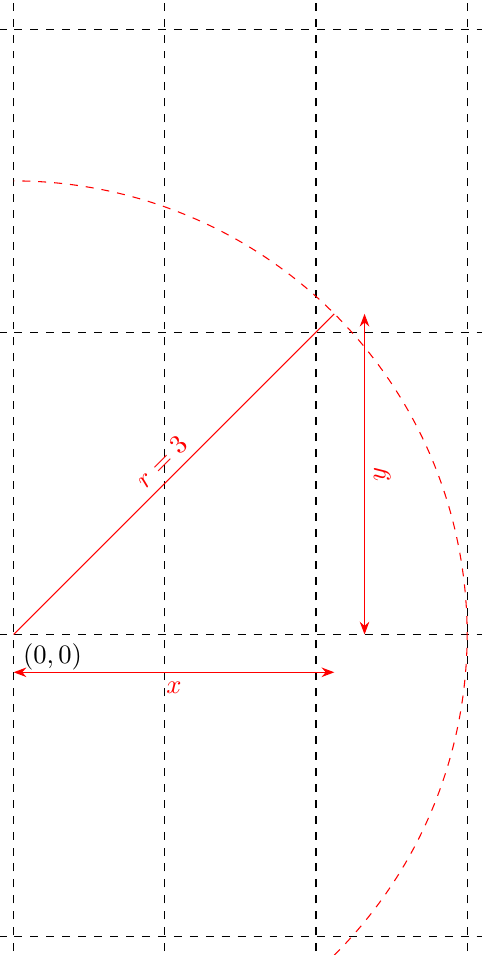 starting at a corner

is optimal (also contributed by @boboquack):

This answer assumes a point-sized ball, as the size of the ball was not explicitly stated. With a big enough ball, more sides are possible (for example, a ball with $0.99$ m diameter can touch at least $100$ sides!).

The answer depends critically on how you define a "side".

If we assume the table has 4 sides, then it's easy to find many paths that allow the ball to touch all 4 (which is what the question was asking at the time of posting this answer).

Instead, I shall interpret "side" as meaning "cushion", of which the table has 6.

Under this definition, a path that touches

is possible. This is a minor adjustment of @wimi's answer - illustrative diagram of the path of the centre of the ball to achieve this: 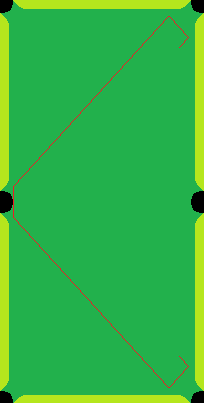 In this path, the ball first bounces off two cushions near a corner, then the corners of two cushions near the middle pocket (as question specified a normal sized ball and a billiard table, the normal shapes of cushions seem implicit!), and finally the other two cushions that are near the next corner.
Long diagonals each have a length somewhat less than $\sqrt2$, leaving plenty for the shorter segments out of the budget of 3.

If multiple hits on the same "side" are to be totalled, as the now modified question asks, the answer can become

much larger - depending on the relative size of the ball and the gap between the cushions on the corner pockets - the ball can bounce between them several times... illustrative example:

As we only know the size of the ball, and not the size and shape of the gap between the cushions, there is no well-defined answer. On a professional table, with just the right trajectory, the ball can bounce many times in a corner like this without rolling very far. It is not uncommon to see this when a professional snooker player "just misses" a pocket for example, and the ball bounces back and forth many times, coming to rest directly in front of the hole, or in other cases (such as the illustrative path above), bounces a few times before rolling away from the pocket.

"The pockets are around 86 mm (3.5 in),[clarification needed] though high-class tournaments may use slightly smaller pockets to increase difficulty"
so that's roughly 30mm larger than the ball.
A ball that rolls for 3m with most of that rolling being bouncing back and forth between the sides of the pocket without quite falling in would hit the sides a total approaching 100 times.

In my other answer I take advantage of the unstated properties of a billiard or snooker table, i.e.

The sides are not straight lines, but curve round towards the pockets, providing a possibility to bounce at different angles. However, this answer cannot be rigourously defined due to its critical reliance on the precise form of the cushions near the corners.

a point sized ball (despite the question always explicitly stating it was "normal dimensions", and later giving an exact dimension), and a table with no pockets at all.

I believe the intended answer is probably

5 bounces, with a path like this: (illustrative diagram, not to scale) 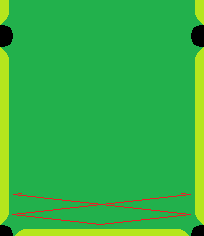 This path avoids the pockets, and also works only due to the ball having a non-zero diameter.

First, it is important to note that the ball was explicitly stated to be "with normal dimensions" even in the first version of the question, and later clarified to specify a diameter of 52.5mm. Therefore this invalidates

an answer whose proof of optimality relies on a horizontal path of 3 metres containing at most 3 bounces.

Whilst @wimi's answer also notes that

A ball of size 0.99m on a 1m table with sides at least 0.5m tall would bounce 100 times, this is also well outside the parameters of the question. A ball of normal dimensions (later clarified as 52.5mm, but for the accuracy needed I'll call it 0.05m) can bounce 4 times with some spare.

A grid similar to the one used in @wimi's answer can be constructed,

but the grid elements should be rectangles of dimension 0.95m x 1.95m, and not 1m x 2m, as the diameter of the ball should be subtracted from each consecutive pair of grid-lines.

It is also necessary for the path to avoid pockets, so these can be marked on the grid too, giving something like this: 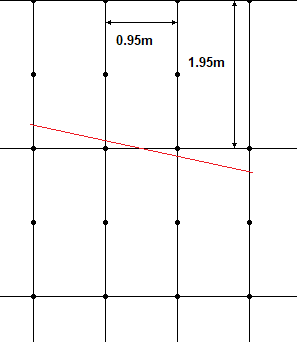 The 3m path (marked in red) is intended as equivalent to the illustrative one drawn on the previous diagram above, but this time drawn approximately to scale. Each bounce of the ball from a side is represented by the red line crossing one of the black lines. None of these bounces are near a pocket (black circles).
There is some flexibility to move this path a bit in order to trade off how close to the corner pockets it gets vs how far from the edge it starts. The illustrated path is intended to show the case where the ball starts with about a 0.04m gap to the first side, and ends a similar distance to the final side. The bounces near the corner pockets are at a point where the ball is around 0.10m from the bottom cushion, so well clear of the pocket.

It can in fact be adjusted to avoid the pockets by a similar margin. The green line (blue on the illustrative not-to-scale diagram on the right) is an example of an appropriately scaled 3m path that avoids the pockets while basically following the path that @wimi proposed: 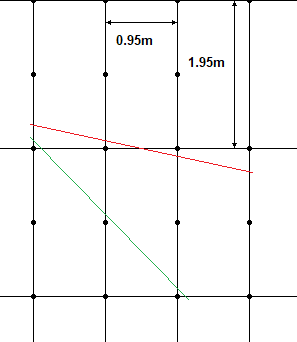 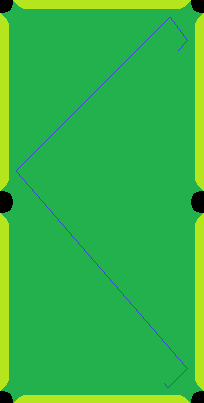 24
Thirteen politicians
15
Holes in the Table
10
Bouncing ball on a billiard board
9
Covering Table with Coins
6
How many possible different shapes are there on a 4x4 dot grid?
1
How many figures to cover the kitchen floor?
0
Number of turns a coin makes going around some other coins
6
Three cups and a ball
12
How many "mathletic" couples were having dinner at the table?