One of my good friends is a scientist, working for some kind of radio telescope organization - I forget the name, but maybe it started with an S? Anyway, she told me that yesterday her team picked up an intense narrowband radio signal, out of the blue, that beamed for around a minute and then disappeared. It was of unknown origin, and their only clue was that it was preceded by a weak telemetry signal from what she described as "a very old spacecraft, one from back in the seventies." It piqued my interest, so I asked her what the mysterious signal said.

This is what she sent me. I'm sure you agree that parts of it appear to have been classified. I'm not sure why that would be... 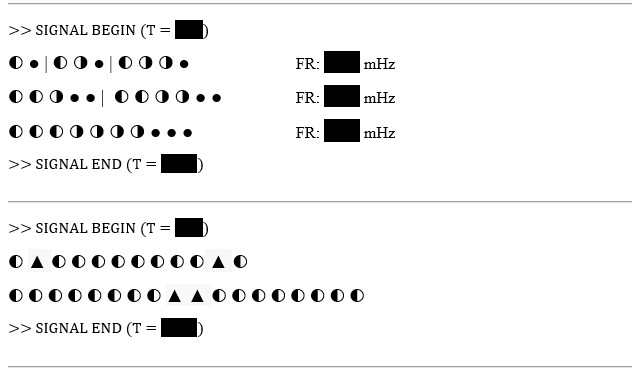 She told me the team had been working to decode it and they could use the help of a puzzler like me, but I had to promise to keep it a secret. Unfortunately, I've racked my brains and I can't figure this one out, so I've decided it's probably fine to share this with you so you can have a crack at it. In the meantime I should - hang on, there's two strangely dressed people at my door -

PDP REPORT: Prisoner #24254 "Sciborg" managed to briefly escape federal prison long enough to shout at some patrons in a roadside diner before being caught and re-detained by our agents.

I've just figured out what she was talking about with the spacecraft! They must have gotten the message and replied - they understood the transition, they're using - oh God they're coming back for me -

PDP REPORT: Prisoner #24254 "Sciborg" has escaped again and was ranting incoherently before being captured.

The plaque, it's all the plaque! They're showing us they understand. The transition state of the molec -

PDP REPORT: Prisoner #24254 "Sciborg" released from federal prison, almost incapable of speech but managed to eke out some words before collapsing.

This is a nearly (90%) complete answer. The signal is sharing:

The building blocks of life in the universe, and life on earth.

The puzzle is hinting at the Pioneer spacecraft which launched with the Pioneer Plaques, which contain basic information about life on earth.

The key here is the schematic of hydrogen and its transition. The aliens are showing us that they understand what hydrogen is, and in fact understand more than that.

If you read the first set of signals as strings representing different atoms (to make it easier to notate, I'll use + for proton, 0 for neutron, and - for electron)

This indicates an understanding of atomic structure. The frequencies listed then are the frequencies of the atoms' electrons (I think, don't quote me on that, I know nothing whatsoever about physics or chemistry). So the three frequencies are 1420.405mHz, 8666mHz, and [unknown, I can't figure out what this one is] These three elements are the main three elements created in the Big Bang.

Once they've indicated this understanding, then we can read the second part much more straightforwardly.

The first line is H20, because there are two single protons and one cluster of 8 protons, which are the atomic numbers for those elements. This is water.

The second line is O2, which is oxygen.

The only thing I can't figure out are the times.

1
Time Crunch Puzzle
12
The strange answers
9
Mysterious First Contact
6
Spaceman from dying rainbows?
12
Not With a Bang, but a Whimper
11
Who poisoned the grandmaster?
22
The Brief Puzzle Hunt
17
A sheet of graph paper and a code
14
The Alchemist's Grimoire
7
Polybius cipher meets Grid Puzzle