Is there a mistake in this vast rebus?

They say a picture is worth a thousand words; that may be a slight exaggeration in this case, but the words in this case are timeless. I present to you a puzzle which is quite simple (albeit large) and quite superficial (although its message is not). While its creation has cost me many an hour wasted that might have been better spent, it will doubtless yield its meaning almost at a glance to those familiar with its content.

Without further ado then, take some light relief from the toil of untangling difficult enigmas, and interpret if you will the following picture (full size here): 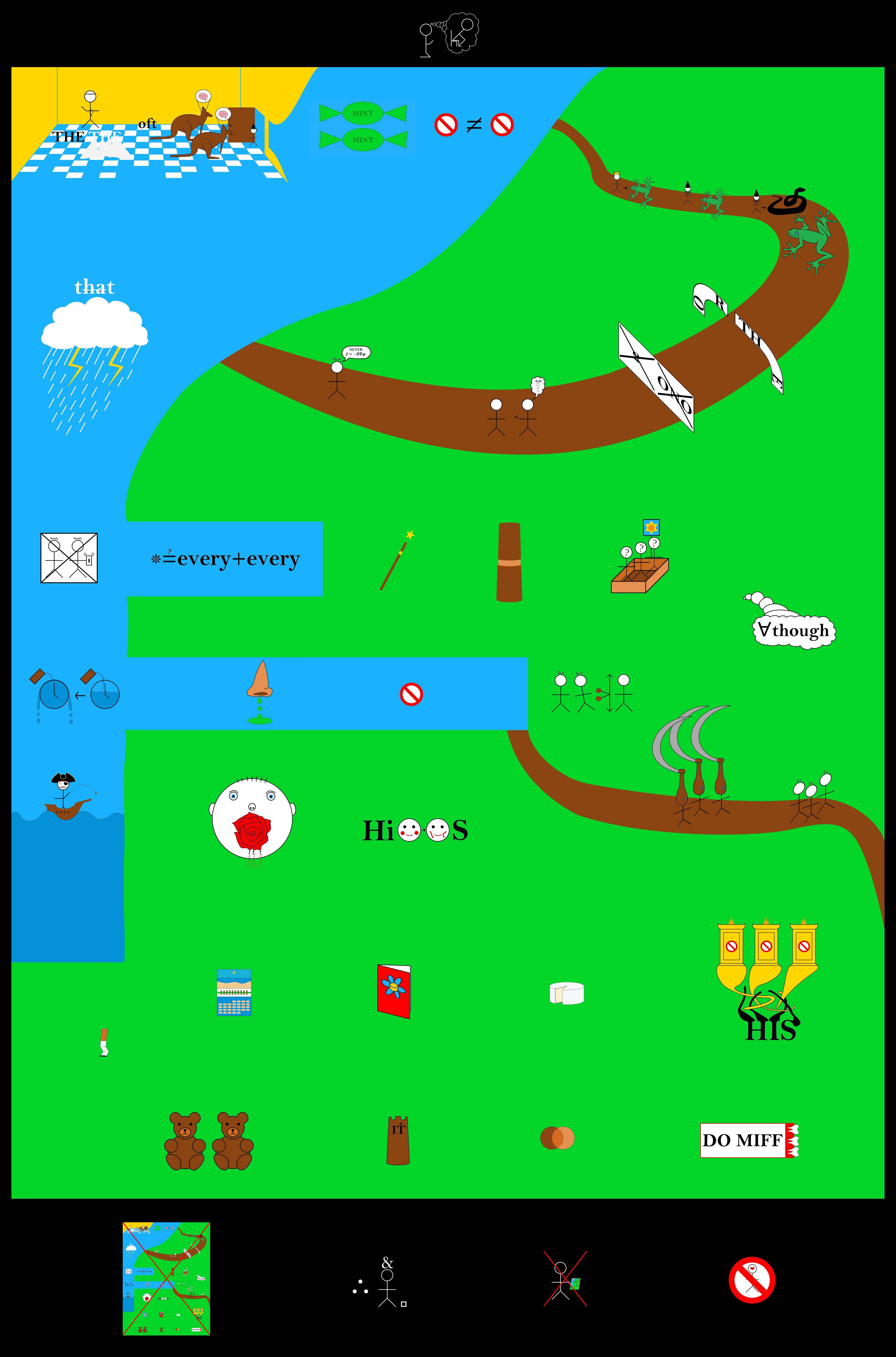 As I have stated below, this puzzle is simply a large rebus or collection of rebuses (not a complex enigmatic puzzle). I made it purely for the fun of creating a rebus that would contain within it an entire (small) work of art. With one or two exceptions, the individual images within the rebus may be approached independently. Partial solutions are welcomed as some of the rebuses are obvious (indeed some are no more than visual depictions of the target word/phrase), and some are more obscure (and may be more amenable to solution in the context of the other components). For the most part, the constructions are simple and silly, and I apologize in advance for some poor puns. It is difficult to say more without giving it away, but I would suggest piecing together the simpler components first (especially sequential ones).

The method by which the intended plaintext is encoded in the given image is in the majority of cases by means of relatively straightforward phonetic wordplay. In a few cases however, this is weakened to include thought-for-thought rather than word-for-word correspondence. A particularly straightforward example, which may be the easiest place to start if you're having trouble finding the encoded text, is in the set of images in the black border at the bottom. Note that in addition to identifying the meaning of each image in the whole picture, you will also need to find the intended order in which the images should be read.

A more concrete hint (as I think I have given about as many hints regarding the general method of solution as I can): The desired solution is an English plaintext, consisting of the entirety of a short (and famous) composition of English literature (which may or may not be part of a larger body of work). This text is represented (mostly through punny phonetic approximations) in the form of a string of rebuses, which may be read off the image in a particular (reasonably predictable) order. Partial solutions are welcomed!

This puzzle is not particularly clever, complex, or multilayered. It is what it claims to be – a giant rebus that encodes its content in a simple albeit quirky manner. Think heavy dependence on lighthearted, tangential (and far too punny) wordplay. Once you have interpreted the rebus, the solution will be complete. The puzzle is, I guess, somewhat a passion project – having consumed hours of time over the past few months, for a result that is neither pretty nor skillful, but really just a bit of fun.

Disclaimer: The entire image has been hand-drawn from scratch with a mouse in MS Paint (with heavy dependence on the curve tool) by someone with no artistic ability. Over the course of the months involved, some inconsistencies of tone and method have also crept in, for which I offer my apologies. While some components of the image are obscure, the quantity of components present should enable the more difficult ones to be deduced, and elucidate the order in which they should be examined. Also note that some artistic license has been taken for the sake of presentation, and some visual aspects of the image may be tangential to the solution.

and it needs to be read 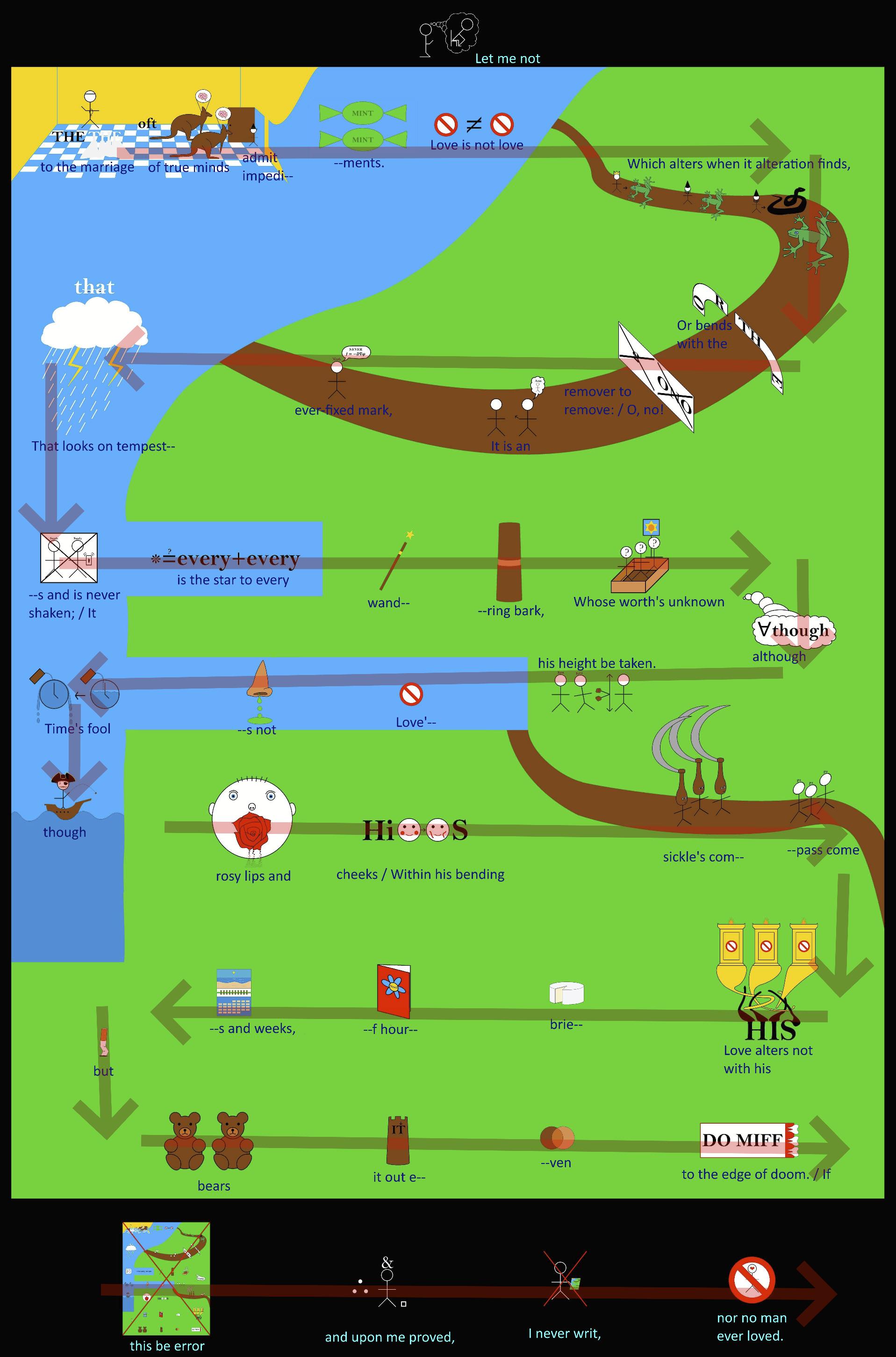 Let me knot [full-sized image shows the figure in the bubble is tying a shoelace]
two-THE marriage [note wedding dress]
oft roo minds
admit [I think the door-opening indicates this, but maybe I'm missing something here still?]
imp Eddy / mints.
Love is not love
witch alters when it alteration finds,
OR bends with THE
remove a 2 remove O NO
It is Ann
ever-Ficks'ed Mark, [that's Fick's law of diffusion]
that looks on
tempest
Sandys never shake a nit
is the star two-every?
wand
ring bark,
Whose worth's unknown <-- I may be missing something here
all though
his height beat a Ken.
Love
snot
Time's full
throw minus ARRRRR [pirate's mouth is crossed out, or gagged, or something]
rosy lips sand
cheeks within HIS bending
sickles come
Pa's come
Love-altars knot with HIS
brie
flower <-- we need "f hour" here, but this is the best I can do
sand weeks,
butt
bears
IT-tower T <-- not terribly sure about this
Venn
toothy edge of "do miff"
this be error [semantic; whole thing crossed out]
AND upon me, proved,
I never writ [semantic]
nor no man ever loved. [semantic]

One recurring thing I don't quite understand:

the "no X" symbol is used a few times to indicate "love". I don't quite understand why, though presumably it relates to the use of "love" to mean a zero score in tennis.

I should maybe add that the title

is presumably a reference to the last couplet of the sonnet -- the penultimate line is "If this be error and upon me proved".