Apply Slitherlink rules. In addition, all sheep must be inside the loop and all wolves must be outside the loop. 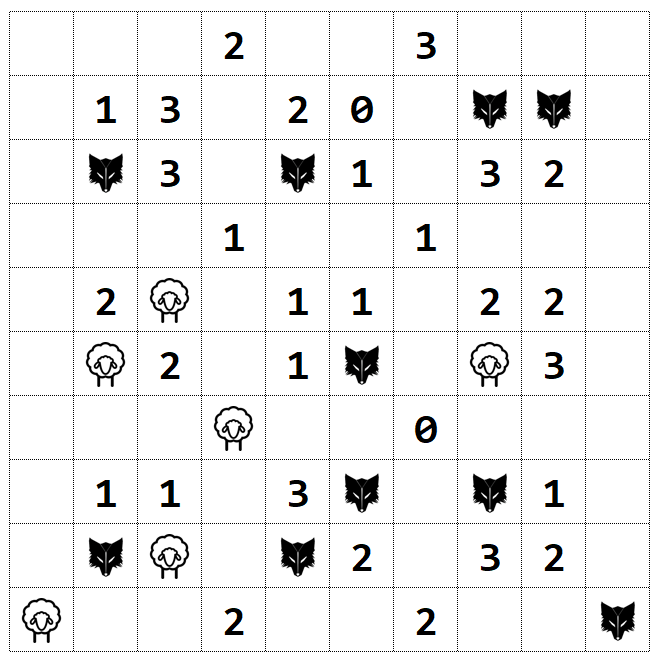 While @happystar has given the correct solution, I thought it might be helpful to provide one which explains the logic behind the puzzle, since this puzzle type is decidedly more complicated than your standard slitherlink...

Apply the usual slitherlink deductions at first (2 adjacent 3's, 3 cornering a 0) and note that the sheep in the bottom-left corner must have walls between it and the edge, while the wolf in the bottom-right corner must have no walls between it and the edge (here I show all confirmed wall segments with a black line and all impossible segments with a red line). 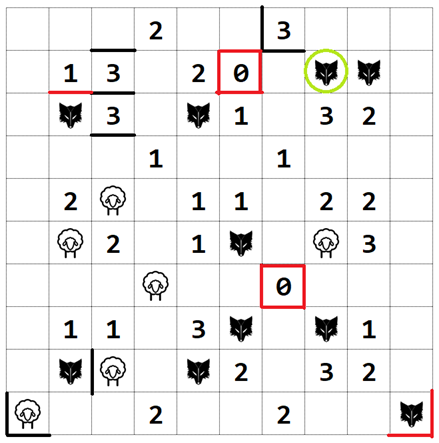 Consider now the wolf circled green in R2C8 - to have an even number of line segments between it and the outside it must have either 0 or 2 segments above it - but 0 is impossible with the 3 to its NW. We can draw in two segments and extend the path in that region given the presence of the adjacent wolf.

Similarly, the bottom leftmost wolf in R9C2 must have either 0 or 2 line segments to the left of it - whichever of these is true will result in some lines being drawn off to the right below it to keep the sheep and wolf separate. 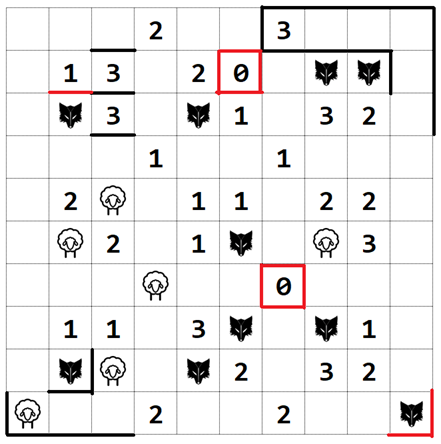 The wolf in R3C5 must have an even number of line segments above it; this can't be 0 as there must be at least 1 above or below the 2 in this column due to the 0 beside it - thus there must be exactly 2 line segments between the wolf and the top edge. These can't both border the 2 or we would need to have a third at the very top for the loop to connect. This means the 2 lines must include the one on the top edge. After drawing that in you can follow the logic and draw some more walls in that area. 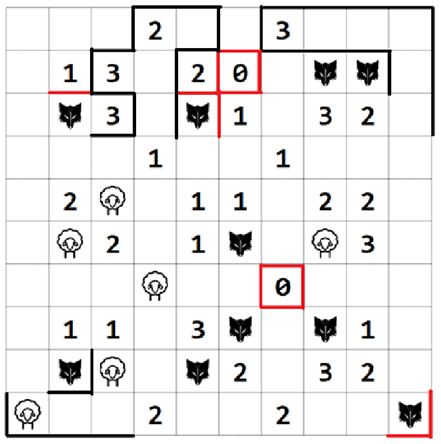 Consider the quartet of squares containing a 3, a 2 and two wolves in rows 8 and 9. The only way to keep both wolves outside the loop and satisfy the 3 is by drawing line segments around the bottom and right of the 3. This leads to several knock-on deductions in the bottom right corner. 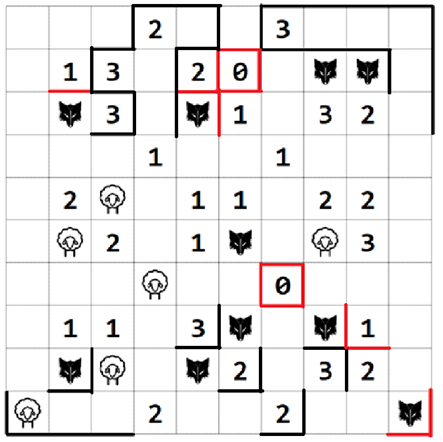 Consider then the 3 in R9C8. If its remaining line segment went up its left side we would end up in the following hypothetical situation (marked in purple), only being able to place one line segment between the wolf in R8C8 and the rightmost edge of the puzzle - this would place it inside the loop, which we do not want! 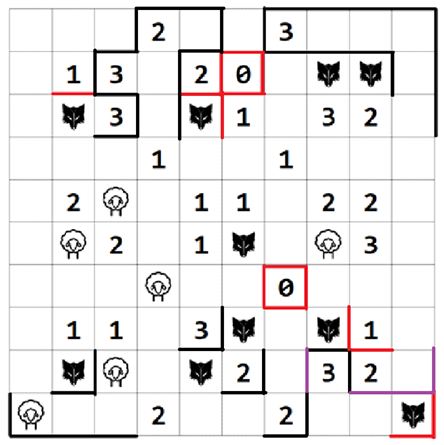 Instead we place the 3's last segment below it, and we can follow the slitherlink's logic to complete the bottom-right corner the only way that's possible... 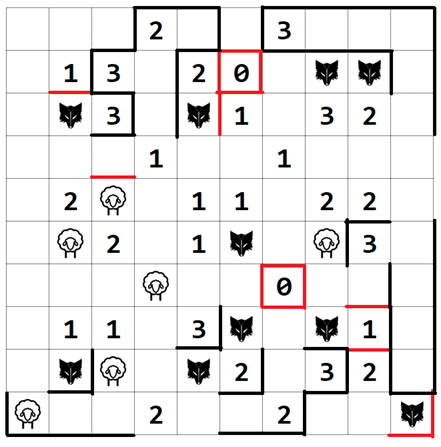 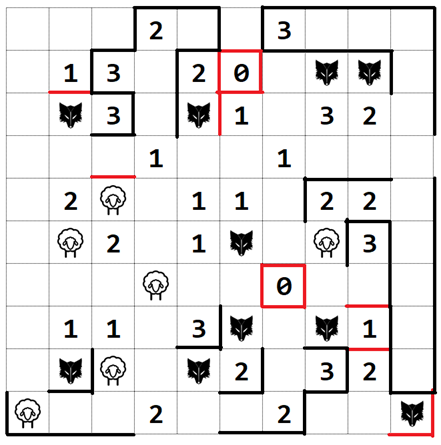 Then if we consider the nearby 2 in R3C9 - if its 2 line segments were left and right we would end up in an impossible configuration: 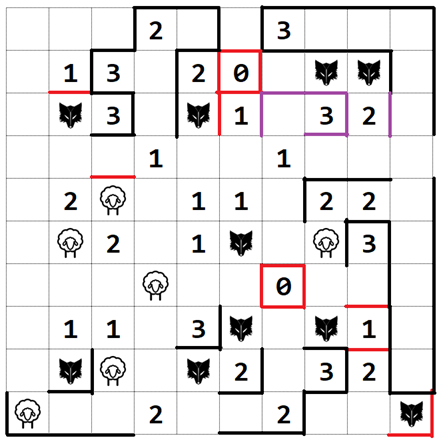 Thus there must be at least one above or below it. BUT since we require an even number below the wolf above it in R2C9 and the bottom of the grid, we most have line segments in BOTH of these positions. This leads to some more deductions... 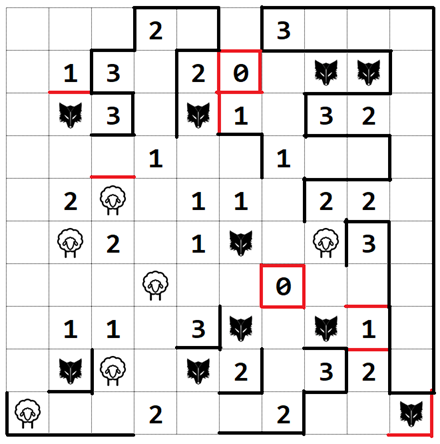 Note next that we require a dividing line between the sheep and lower wolf in column 8, and this cannot be directly beneath the sheep or it would cut off a loop in the top right. Follow the logic of the loop to add a few more lines: 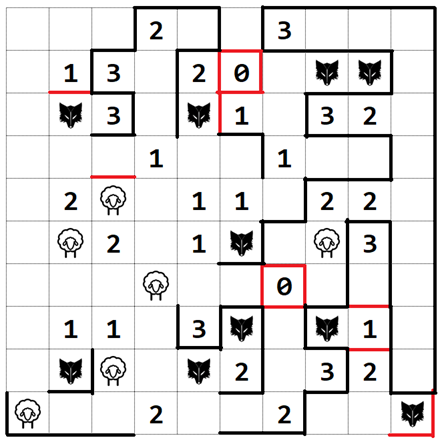 Then resolve the logic of the 1's in the centre of the puzzle: 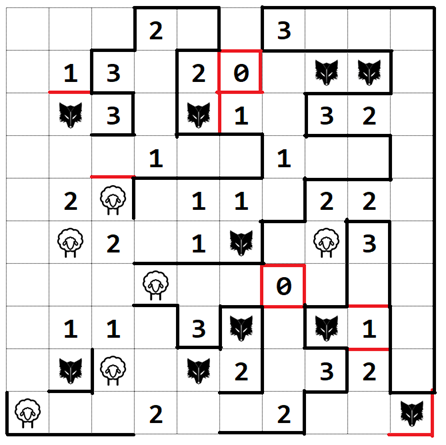 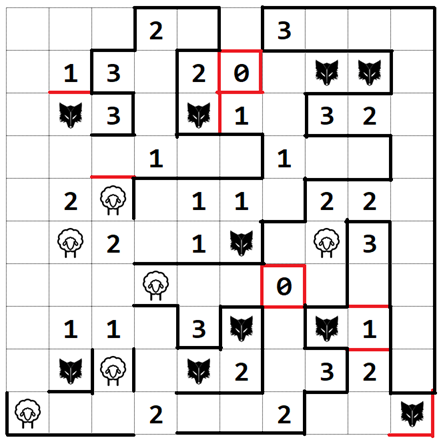 Meanwhile, if we consider the quartet of 2's and sheep on the left hand side, we see that the 2 in the SE quadrant must have walls either both top-and-left or both bottom-and-right, leaving both sheep with the same 'parity' - one of these is now clearly impossible so the walls must go top and left, with some more deductions that follow: 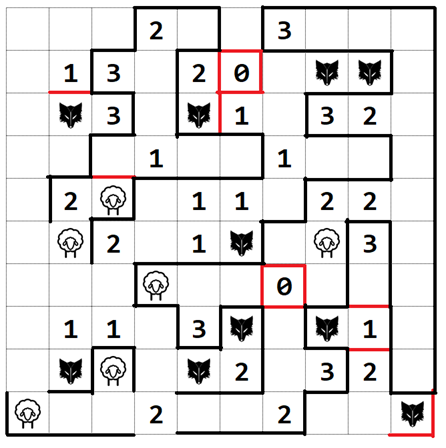 All that remains is a few final deductions to make the loop whole and we are done! 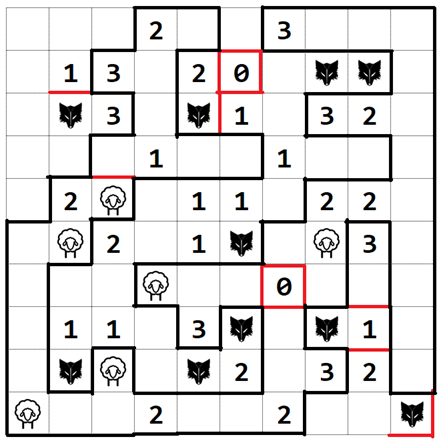 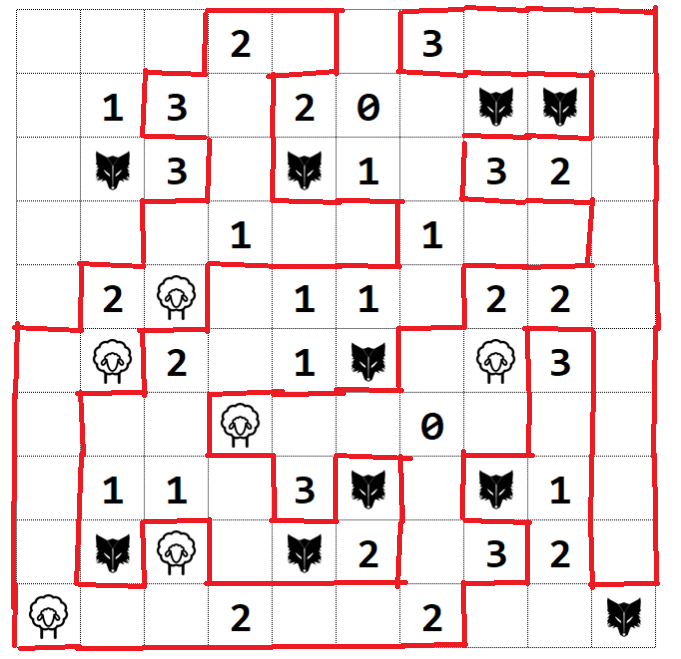 Some detailed explanations/examples re the sheep and wolves (as requested by Stiv):

Label the columns abc... etc and rows 123... etc (like algebraic Chess notation). Start with the '3' at e3. The two adjacent wolves must be separated by an even number of loop segments so we can place loop segments to the south and east of e3. This solves the '2' clues at f2 and g1. Then we can work our way up the right side of the grid.