Can you place all numbers from 1 to 16 into cells, such that the following 8 equations hold? Note that the operator "/" only works for non-remainder division, i.e. you can have "8 / 4" but not "8 / 3". As usual multiplication and division are performed before addition and subtraction. Good luck! 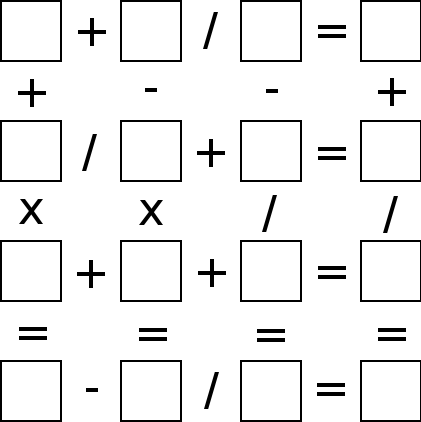 Let's label the grid as follows:

Observe that there are five divisions, none of which share any number. Since all numbers are distinct, the ratios must be at least 2, and therefore the divisors cannot exceed 8. The positions for divisors are $C, F, K, L, O$. Also since $I+J+K=L$, it follows that all of $I,J,K$ are less than $L$, and therefore they cannot exceed 8 either. So far, we've identified seven cells that cannot exceed 8: $C, F, I, J, K, L, O$. Also, if you're familiar with Kakuro, you can notice that 1 must be one of $I,J,K$ from $I+J+K=L \le 8$.

Now consider the two prime numbers 11 and 13. They cannot be a part of division (neither dividend nor divisor): They cannot divide anything else and they cannot be divided by anything else other than 1. The only place where 1 can divide something is $G \div K$, but then $C$ becomes too high. Therefore, 11 and 13 must be placed in $ADPM$.

As a bonus, a computer-based proof that the solution is unique (Python + Z3Py):

Not the answer you're looking for? Browse other questions tagged mathematics no-computers combinatorics or ask your own question.

2
Can you fill the cells by integers?