Tubariphobia - The fear of pickles

There are many topics that polarize. But not a single topic comes close to the one and only age-old question that some claim is the root of all division between people: "Are pickles disgusting or not?"

I'm not taking sides at all here. But since I assume you, the reader, is an intelligent and moral person, I decided to present the following story from the perspective of a member of the NPG (No Pickle Gang). The NPG is a cult a group of like-minded people, questioning and fighting the dark agendas of the evil pickle-lover cult.

You are lying in your bed, dreaming about the prospect of a utopian world free from all pickle-lovers, where hate ceased to exist and all which remains is love and compassion. The dark ties of the pickle-lovers were ripped apart, unleashing all people from the web of lies that the cult has spun.

You look-pick the door and enter his residence. The entrance area is filled with decoration resembling pickled food. This view of total disgrace forces you to throw up onto his carpet, which also has illustration of pickles on it. After you've gotten yourself together, you discover a stairway leading down to presumably his cellar, with a large sign beside of it: "Crypt of the Pickles"

You really don't want to go down there for your own well-being. But what have all the years as a member of the NPG taught you? You cannot simply dishonor your ancestors, who spent their life studying and fighting the causes that lead people to like pickles. You have to go down there; Down into the abyss of humanity.

As you enter the crypt, you hear strange sounds coming from somewhere near. It sounds like somebody is drowning. You quietly sneak to the source of the sound, and after you've found it, you cannot believe what your eyes are perceiving. A cult-member dressed in a tribal clothing made fully out of pickled food is forcing the head of a young man into a bathtub, filled with vinegar and pickled food. You quickly realize that this is their initiation ritual, which was only ever speculated about, but never actually seen by anyone in the NPG. The loyal members who have tried to see and document it first-hand never came back from their journey.

This poor young man is already lost, there is nothing you can do to help him, so you sneak by this perverted scene, traveling deeper and deeper into the crypt. You reach a suspicious corner (depicted below) of the crypt. There is a chest with the word "imgur" engraved onto it, and a small note lying beside it. 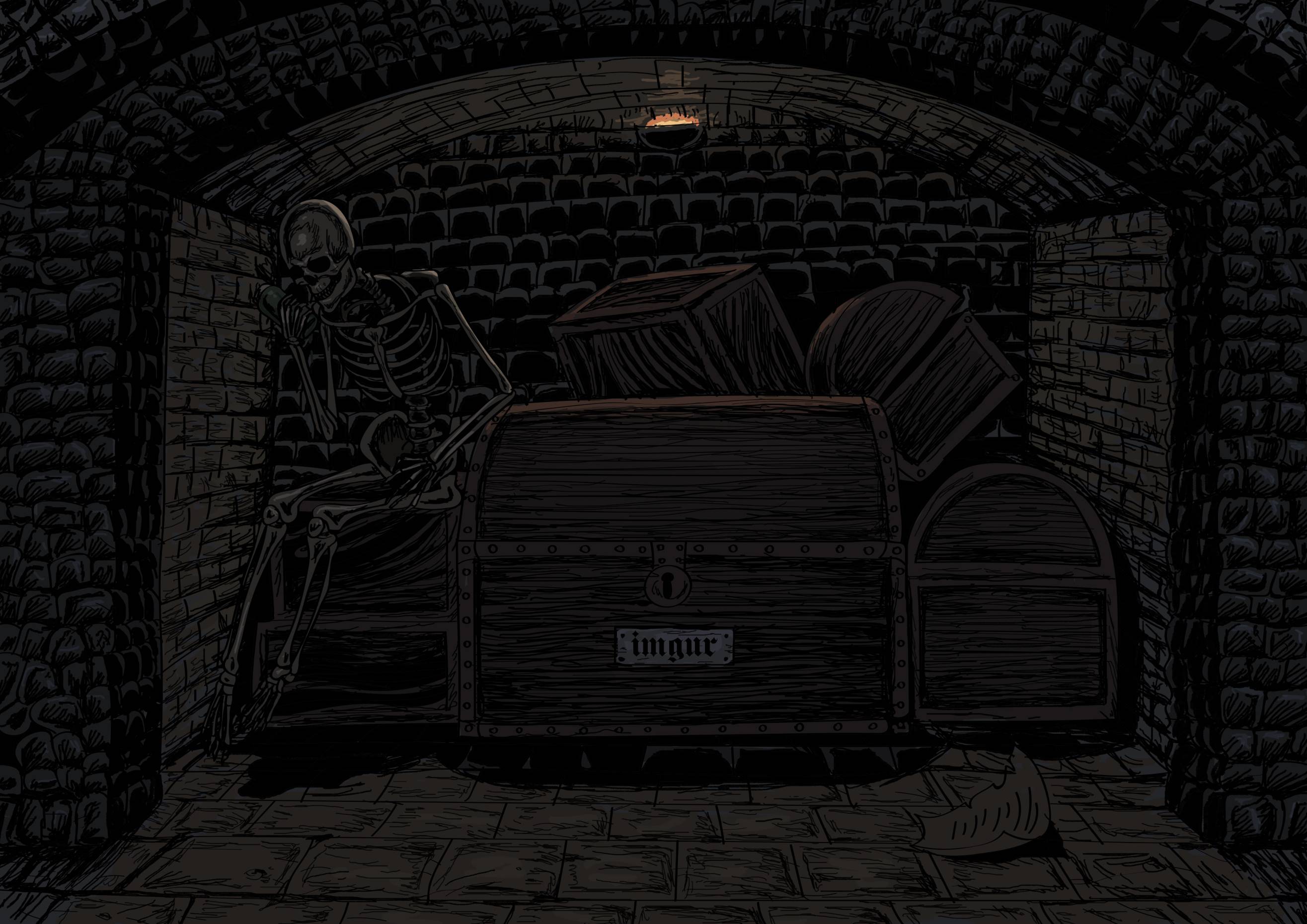 For one time, we operate in a larger visible spectrum, with Pickle in front of everything else. The base range isn't the standard, but it's still standard.

The key for a fulfilling life:

29: Pickles represent indulgence, instead of abstinence
10: Harm any disbelievers
3: Pickles represent all of the so-called disgusting things, as they all lead to physical, mental, or emotional gratification
15: Do not make seXual advances on pickles unless you are given the mating signal
14: Cardinal sin - A lack of taste

What secret lies inside of this chest?

To spare you of some trial & error

As you have probably already guessed, you need to go to a i.stack.imgur URL, and since it's a hassle to try out every single result you come to, here are some indications, beside the hints already present in the puzzle:

(See the newly added tag, cipher). If you think a required part is missing from that: Read the subscript below again

The cipher to use is a Vigenere Cipher, albeit with a different alphabet

The entire story (everything inside the first blockquote) is propaganda fluff.

The easiest to figure out is the alphabet. The note tells us that

The base range isn't the standard, but it's still standard.

we operate in a larger visible spectrum, with Pickle in front of everything else

This indicates that the alphabet isn't standard ASCII, but is reordered by placing the characters of "Pickle" in front of the rest. Thus we obtain the 95-character alphabet

To find the key, we look at the following part of the note, the start of which hints that this is indeed what we should be looking at:

The key for a fulfilling life

As was also suggested by Zoir in the comments, we need to

retrieve the character at the position given by the number at the start, for each line in the note. This gives:
- 29: Pickles represent indulgence, instead of abstinence -> ,
- 10: Harm any disbelievers -> d
- 3: Pickles represent all of the so-called disgusting things, as they all lead to physical, mental, or emotional gratification -> c
- 15: Do not make seXual advances on pickles unless you are given the mating signal -> X
- 14: Cardinal sin - A lack of taste -> -

Finally, we need to find the ciphertext to decrypt. At first glance, it seems like we have completely exhausted the hints in the problem: the image tells us that we're looking for an Imgur link, the note has provided the alphabet and the key to the cipher, and the subscript tells us that the story at the beginning is decorative.

What we do know is that the Imgur link is 5 characters long, so the ciphertext is probably 5 characters long as well. Looking in the relevant parts of the puzzle, there are very few 5 character words, the main one being "imgur" itself. Lo and behold, it so happens that "imgur" is the ciphertext! Putting everything together, we can finally marvel at the prize of a lifetime: https://i.stack.imgur.com/ned2Z.png

Not the answer you're looking for? Browse other questions tagged enigmatic-puzzle cipher story or ask your own question.

3
Where are the twinkies?
23
Word of advice: If someone beats you in a guess-the-song challenge, dominate them
14
Pilgrims On The Road To Ruffle Downs
1
Robot Dan and I
5
Help, my life is in danger!
4
Horror Episode #2: Not So Well
2
The Unsolvable Mystery
19
What force is more potent than love?
18
The Order's First Member