An eye for style

My colour-blind friend and I play in the same Dungeons and Dragons campaign. Our party had just died in a horrendously managed battle against a dracolisk (seriously, don't ask!) and so we were back to rolling up new characters before the next session.

After much internal debate, I finally decided to play an elven cleric who is 'totally about fashion' and would attempt to purchase new clothing in each town we would pass through. For once, I wanted her to have a name she could wear with pride (my late halfling bard, Squoggle, had never been taken seriously!)

Since I am so terrible at naming, I sent my friend a text for help with a name. Some time later, instead of an answer, I ended up receiving the following image: 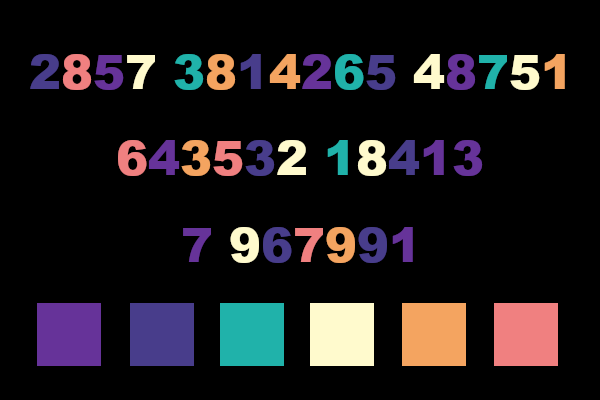 What does my friend think I should name my character?

As a bonus, what job do you think my friend has?

This puzzle is in homage to my friend who is colour-blind and actually could solve it with only what you have above.

Apologies if you think this is a terrible puzzle... constructive feedback is appreciated. :)

Why would anyone add coloured squares to an image?

My friend finds naming things even more useful than I do.

There is another applicable tag for this puzzle that I haven't added. I am sure it will become obvious when that step is in front of you!

Purists may think (as do I) that the last step doesn’t really deserve the missing tag... but the puzzle and the story bring their own lenses on what is left to solve.

The final step contains three different ways to get the same answer.

I believe your friend is suggesting you should use the name:

The first thing to do here is:

identify the 6 colours used in the making of this cipher. These are (reading the 6 squares from left to right):

(And yes, I had to use a colour 'eye dropper' to find the RGB codes and then search for the corresponding colour name online.)

What we then need to do is:

assign numbers to the letters in each colour name, starting with 1. Then for each number, read off the letter with that index. For example, the first digit is 2 and is coloured with 'DARK SLATE BLUE' - this would translate to 'A', the 2nd letter of the colour name.

The message then decodes to:

What is this? Surely, it's:

a cryptic crossword clue (of sorts)! Specifically, it's a triple definition, where three parts point to different meanings of IRIS:

ARCH GODDESS - in Greek mythology, Iris was the goddess of the rainbow (an arch of colour);

OPENS CENTRE - changes in shape of the iris of the eye cause the pupil (at its centre) to open and close, controlling the amount of light that enters. This also explains the relevance of eye in the title!

LIKE A FLOWER - an iris is also a species of flower!

As to your friend's career, I wouldn't be at all surprised if they are a:

web developer, as there are very few other careers in which one would need to use colour names this specifically!

Not the answer you're looking for? Browse other questions tagged knowledge enigmatic-puzzle cipher or ask your own question.