This is part 5 of the puzzle series. Part 1 is here.

This is my most remote destination so far. The views out here are breathtaking, although from what I hear this place is even more beautiful if visited at a different time of the year. Maybe I need to come back at some point!

Twelve clues contain an extra word, which you must remove before solving. The extra words form an instruction for finding out the final answer, which is two words. 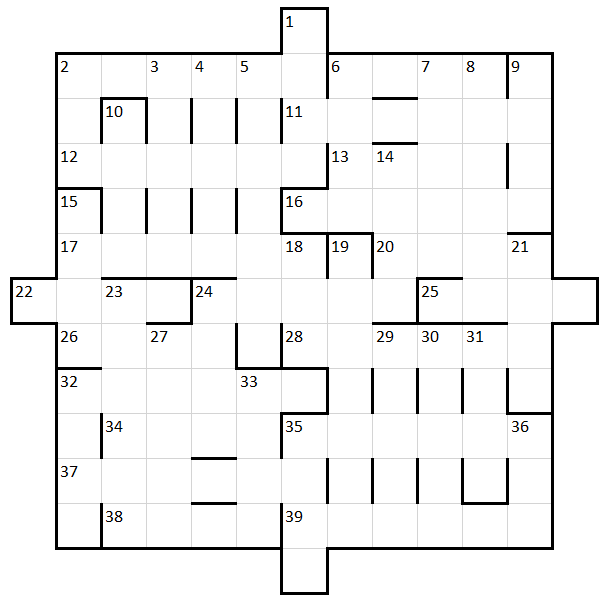 Across
2. Omicron (a letter in the Greek alphabet) drawn in sequoia's bark to depict the Greek concept of wisdom (6)
6. One among three examples of Buckeyes ultimately talk back (4)
11. Wet oak cutting southeastern driveway's entrance (6)
12. Adam's wife left; I kindled larch at the back? (6)
13. Part of leg essentially reset with a tiny piece of holly in-between (4)
16. Amundsen and Dahl – extremely religious – in possession of a little axe, cutting ancient firs (6)
17. A quantity of last bits of plum risotto eaten by female relative (6)
20. The projects for mashing plums quietly scrapped (4)
22. Spruce's crown placed by a metal box (4)
24. Some said "Go eat hemlock!", leading to a fatality (5)
25. Receptive of pine regularly having festering core (4)
26. Pests cut down one part of lime by 90% (4)
28. Missing birch top disturbs outsiders (6)
32. North Greek oaks cut in half; Poles showing expressions of disapproval (6)
34. Outside of ancient city, occasionally, lemons almost being widely-used currency (4)
35. Exhausting time – trunk of firs, in turn, ultimately decaying (6)
37. Meal consisting of American flipped-and-ripped cherry centres (6)
38. Alien surrounded by palms on vacation – and parrots, perhaps (4)
39. Gut reaction of el-Sisi: Cutting roots behind hollow elm (6)

Down
1. Hose down ash south of woodland's northern border (4)
2. Sun god for Egyptians left olive stuffing (3)
3. Half of olives stored in case of potato disease (5)
4. This clue, for instance – laugher, me and you, they say – 'round hickory's core (5)
5. Vocalized content of "Peppermint" by one DJ (7)
6. Peel of oranges twisted repeatedly, the result being quite mediocre (2-2)
7. Say, slalom by pair of willows, showing ability (5)
8. Imitation of beverage, with no vegetable peel, containing a small amount of durian (4-2)
9. Ash bringing up beverage leads to multiple instances of commotion (4)
10. Upcoming leader in maple syrup essentially provided for company (4)
14. Mix of meat and potatoes contains a bit of hazel (4)
15. Ancient idol's two heads, of Babylonian alder (4)
18. The way northward beset by goat-trees (3)
19. Rotated sides of twinberry atrium showing lack of one element (7)
21. Backs of hornbeam tree structures, then spotless, displaying disorder (4)
23. Launch of fir products starting all over the European Union (4,2)
24. Expensive alder construction does not have right length (4)
27. Revolutionary action: Going with maple finish for two-seater (5)
29. Base of fresh salad, of rose and chestnut, maybe (5)
30. Leaves of myrtle finally seen near 11th Street, looking northward (5)
31. Call on the telephone? The Pines, for example, make one per year (4)
32. By idea of soldiers, chestnuts shelled many times (4)
33. Expressions against picking middle parts of magnolia trees with spade (4)
35. Candlenut for one example, ultimately (4)
36. Oak trimming's finishing while producing carbon dioxide? (3) 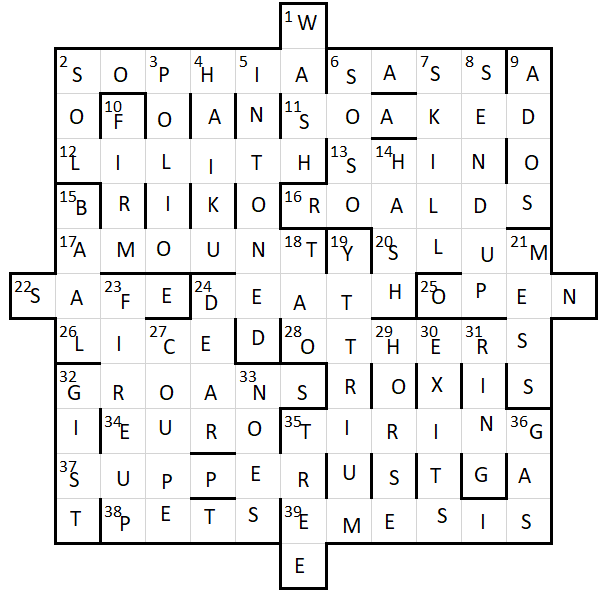 The extra words in the clues spell out the phrase: BETWEEN FIRS GO NORTH TURN LEFT BY ASH THEN RIGHT BY OAK. [Note: fixed per clue from OP] These are directions in the grid! Reading as in the diagram below, the destination is MOUNT YOSHINO! 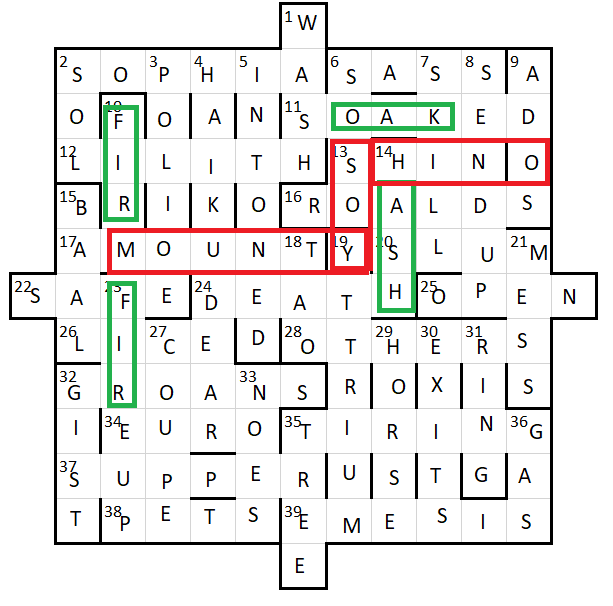