This puzzle is another study for a (hopefully) upcoming puzzle, which I think has an interesting solution path. This puzzle contains a Nurikabe and a Kakurasu (see a previous puzzle for details). The connection between the two is simple: for each clue in the Nurikabe, if the corresponding square in the Kakurasu is shaded, the Nurikabe clue should be increased by 1. Unclued squares in the Nurikabe are unclued, regardless of the Kakurasu. Here's the grid: 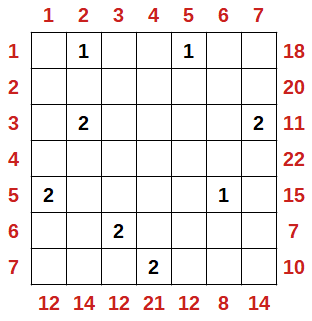 The different colors on the numbers in the grid are simply to differentiate the clue types, and do not have any bearing on the puzzle. You will need to solve both puzzles simultaneously; there is a unique solution for the pair of puzzles as connected. Hope you enjoy!

Text versions of the puzzles: 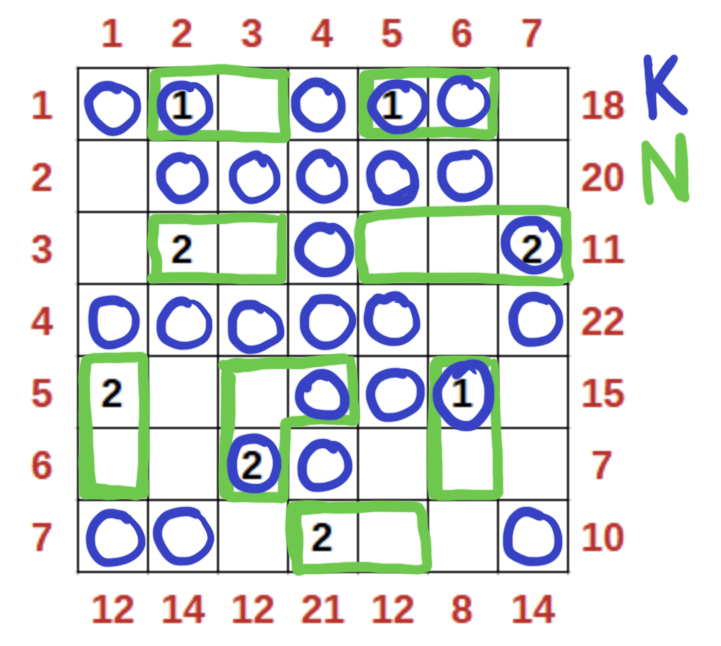 Also, given the fact that each Nurikabe can only expand by one, are there any squares that MUST be oceans given the possible reach of the islands? I filled those in, too. And if there were any points in which I knew the direction the islands needed to head, I filled those in too. So, on its own, the Nurikabe is already about halfway complete. 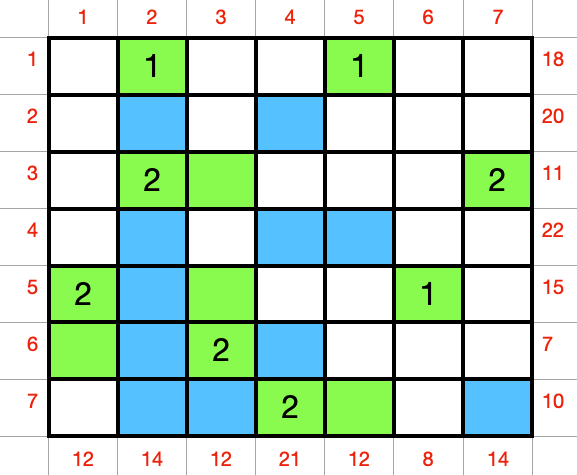 At this point, I got stuck. Where can I have another inroad with the K? All the other places are "okay, it has to be X or Y" but nothing definitive. My strategy at this point, and there's probably a better one, was to pick a "domino decision" - that is, one that I knew would have a lot of ramifications to a lot of other squares. If I followed perfectly logically from there, if it ended up not working, I could rewind and know the other possible decision was correct. The decision I chose was to make the 7th row, 4th column NOT highlighted. Which gives us this: 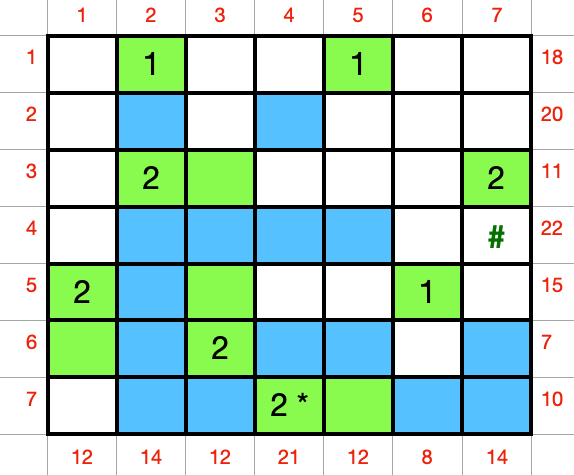 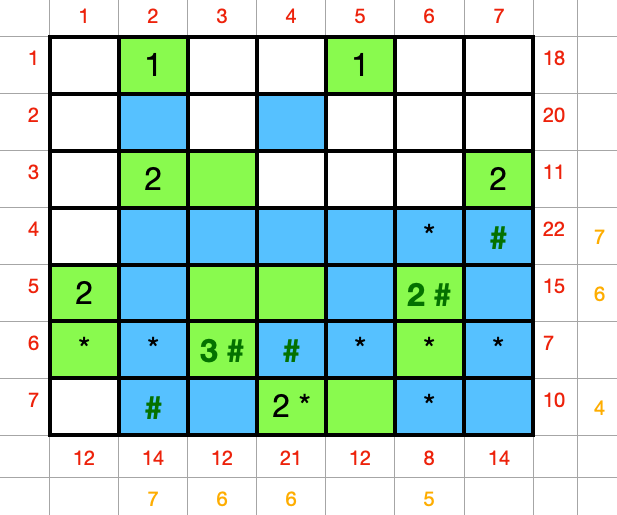 Now the 21 column is filled, as is the 22 row, and that sets off some other progress in the K, too. And over in the N, we realize that the 2 in col 7 needs to go left one to ensure that there's no 2x2 ocean. 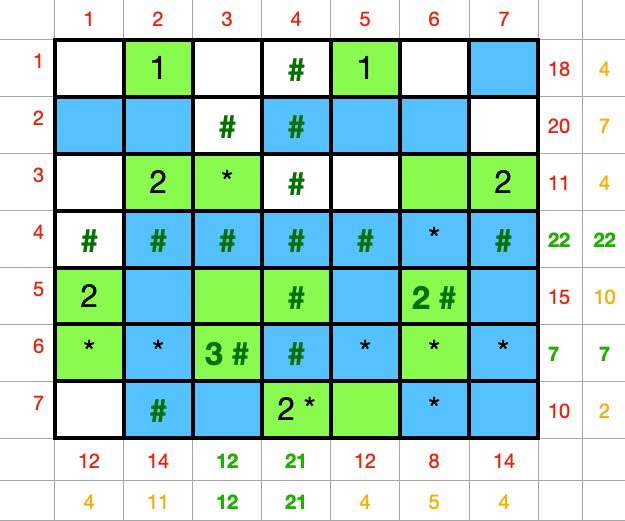 From there, it's just generally a process of checking the different ways of moving forward: 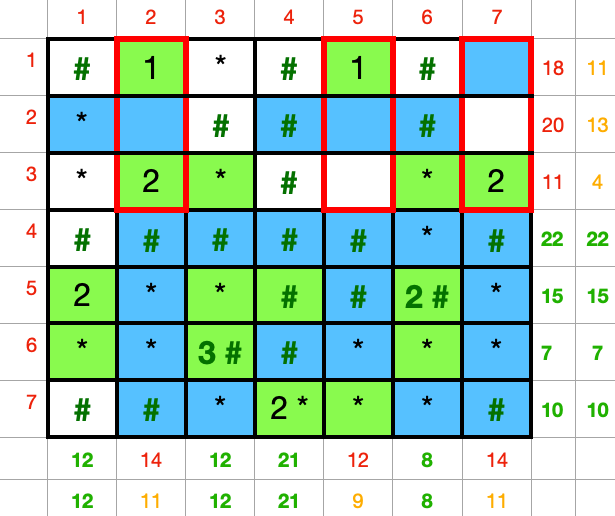 We know that the bottom row needs at least one of the islands to expand by one to avoid the 2x2 ocean rule. In fact, because of the possible 2x2 oceans left, we know that actually 3 out of 4 of them must be expanded. This was another "domino decision" for me - I chose to pick 7 as the remaining number in row 3 to extend that island left by one. That forced the (r1, c5) island to the right one, and the other top-row island right one as well. After that, it all just falls into place by process of elimination. 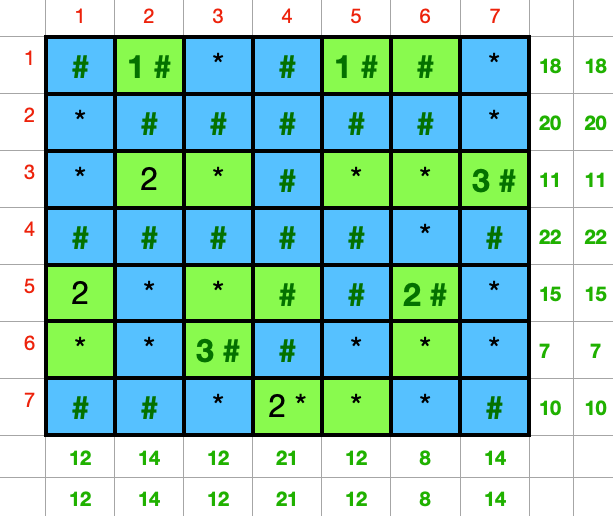 39
Q: What kind of logic puzzle would you like? A: Yes

11
Nurikabe-Slitherlink
39
Q: What kind of logic puzzle would you like? A: Yes
4
Another logic study
10
Nutakapa: A Nurikabe-Tapa Hybrid
4
Another Nutakapa
8
Nonorasu - A Nonogram-Kakurasu Hybrid
15
Cross-Pollination
11
Nurikabe: The Twisty Corridors
10
The Nurikabe of Peace
10
Nurikabe: An Inconvenient Twelve