I have created several riddles with my brother, and one of my favourite ones is this one. It is based on the classic prisoner hat riddle, but it has a twist. 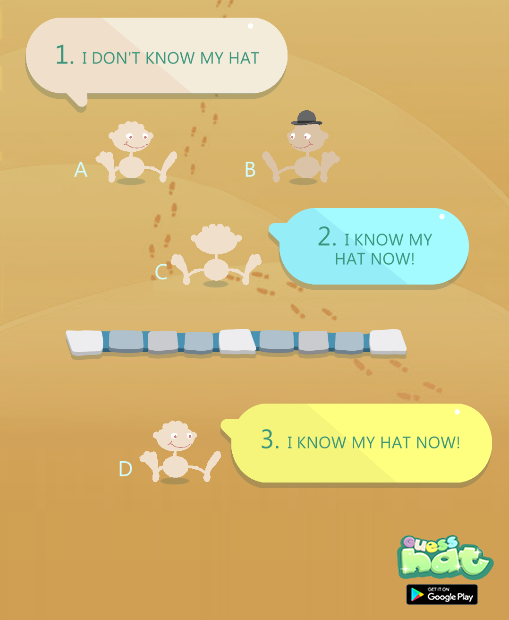 DESCRIPTION: A, B and C can see the hats of their two mates, but not their own hat. Pay attention to the order, they give tips one by one:

1- A can see the hats B and C are wearing, but he doesn’t know what hat he’s wearing

3- Finally, D, who is hidden behind a wall and can’t see anyone, figures out what hat he is wearing, just by hearing what A and C have said.

We already know B is wearing a black hat. You have to guess A's, C's, and D's hat! There is only one possible solution

Let's start with the obvious:

There are not one or four black hats. In either case, A would know his hat color immediately.

If there are two black hats, for A to not know his hat color, C must be wearing a green hat. Likewise, if A is wearing the second black hat, C can deduce his own hat is green without A's input. Therefore, A and C's hats are both green. D knows from both A and C that their hats are the same color, in this way. I fail to see how D deduces his own hat color, in this line, though; if he cannot see B, he does not know whether it is black or green, so this does not work out.