I've recently launched an online puzzle RAVEL. It's a 3D array of cubes that must be arranged in color-order. A legal move is to slide a row, column, or lane any number of spaces. The cubes that are pushed out the end are inserted at the other end.

I suggest that you visit RAVEL, click the "Experimenter" tab and try some RAVELs of various dimensions so you can better appreciate what follows.

I conjecture that all permutations are solvable but because I don't know for sure, I shuffle the RAVEL with a series of random legal moves.

Is it necessary to shuffle with legal moves? Or could I simply shuffle it with random swaps and have it still be solvable? Put another way: is the conjecture true, are all permutations solvable?

My second question has to do with solution techniques. I solve RAVELs layer-by-layer using ad hoc methods to move cubies into place without altering the positions of already-placed ones. But in the last layer, I use formalized methods for the last several cubies.

This algorithm cycles the positions of three cubies leaving all the other cubies in place. The space between the three cubies doesn't matter so long as they form a right angle: cubies 1 & 2 on the same row, cubies 2 & 3 on the same column. 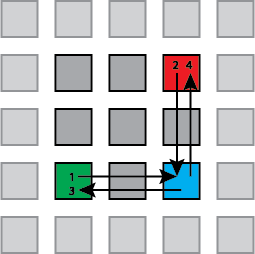 The numbers in the image show the sequence of moves. To cycle in the opposite direction, switch 1 with 2, and switch 3 with 4.

Often you can finish solving the RAVEL using just the procedures above. But sometimes pairs of swapped cubies remain. I don't know of a general algorithm for swapping pairs that works for all sizes of RAVEL. I have managed to solve some examples by just flailing away, trying anything.

I found a procedure to do a pair swap on RAVELs where one of the dimensions equals 4. 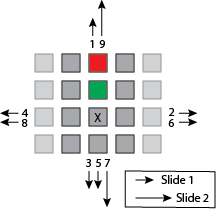 The picture shows the sequence of moves to swap the red and green cubies. The vertical dimension must be four.

Can you create a pair swap algorithm that works for all sized RAVELs?

This puzzle is a 3d version of one that is available in Simon Tatham's puzzle collection under the name Sixteen. This puzzle has been discussed here before: Techniques for solving row column sliding puzzles

The answer there applies here as well, so I won't go into great detail.

If one or more dimensions is even, then a shift along such a dimension is an odd permutation. Therefore you can do such a shift, and solve most of the shifted pieces with 3-cycles, and be left with a single swap.
Suppose A is a move that shifts a line containing $2n$ blocks, B is a shift of an intersecting line of blocks, and B' is the reverse of B. Then the move sequence BAB'A repeated $n-1$ times, followed by BAAB'A, will have the effect of swapping two adjacent blocks in the A line.

Not the answer you're looking for? Browse other questions tagged visual three-dimensional or ask your own question.