Here's a variant of a slitherlink puzzle. Each color (yellow, orange, green, blue) represents one of the numbers 0, 1, 2 or 3. Enjoy!

Bonus: Can we be sure there is only one solution? 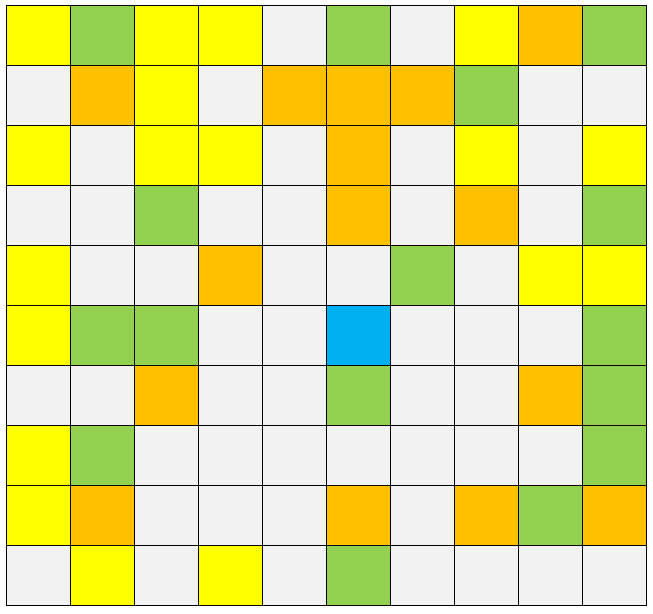 Pipped to the post by @Deusovi while writing up (who'd have thought it?!) but my solution agreed with his entirely. Instead of merely replicating what he has already written, this answer focuses on my step-by-step logic for the slitherlink solution (at his suggestion). If you upvote this answer, go see his answer below as well and upvote it!

Assigning the values 0-3 to the four different colours, the only valid slitherlink starting grid looks like this: 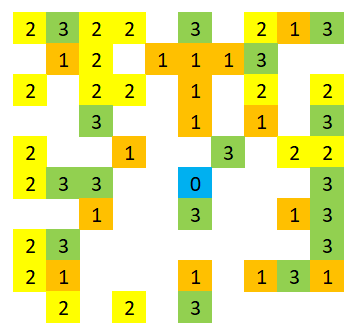 For a full description of the logical steps showing that there is only one valid match-up of numbers and colours, see @Deusovi's answer.

There are some initial line segments that can be drawn or ruled out immediately according to the usual rules of slitherlink. (Note that throughout this write-up, thick black lines represent known correct segments, while faint red dotted lines mark segments that cannot possibly be part of the solution. Not all impossible segments are shown - only those with some bearing on my logic process...)

(a) The central 0 permits some immediate deductions for line segments around its neighbouring 3's.

(b) Adjacent 3's must always have a line segment between them - draw these in for the two sets of adjacent 3's. The vertical line segments for the set on the right can also be decided due to the placement of the 1 directly beneath. The line can then be extended a little further along the bottom row, while some other segments can be resolved at its top end because of the placement of the other 3 on the edge.

(c) The 3 in the top-right corner must have line segments above it and to its right. We can then narrow down the adjacent 1's only segment to two possible spots, enabling further inferences for its other neighbouring 3, and a line segment further to its right.

(d) The 2 in the top-left corner must either have top-and-left or bottom-and-right segments. The former is incompatible with the positions of the neighbouring 3 and 1. 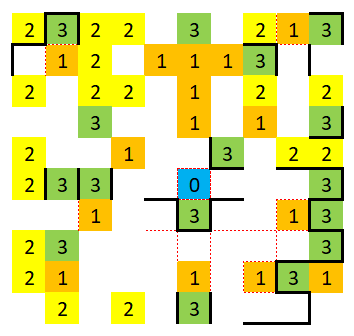 (e) It must have its only segment on the left or bottom, to link with the line from the neighbouring 3. If placed on the left there will be no legal way to place the second segment for the 2 to its 'south-east'; hence, it must be on the bottom. The line can now be extended both ways in the top-right section by forced logic. 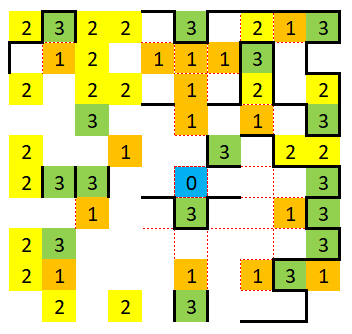 (f) Its only line segment cannot be placed on the left - if it was, the two to its 'north-west' cannot be legally resolved while tying up the loose end from the 3 in the middle of the top row. Some considerable forced logic follows placing it on the bottom, including two segments around a nearby 3, the entire bottom-centre sector of the grid, and a bar linking the two 2's on the bottom row (since the right-most 2's segments must travel between opposing corners). 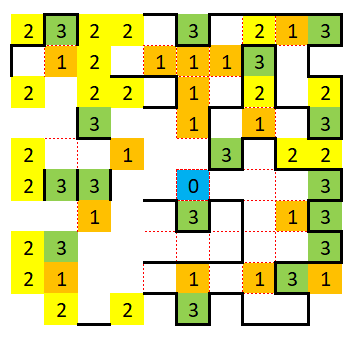 (g) Its two segments must either be top-and-bottom or left-and-right, to avoid dead-ending the line. Placing them left-and-right results in contradictions when attempting to reconcile the 2 directly beneath it with its neighbouring 1 and 3. More forced logic ensues.

(h) We can also start to make some headway down the left-hand-side of the grid - although we do not yet know whether the 2 at the very left of row 3 has two horizontal segments or two vertical segments, whichever one it turns out to be will require some linking lines stretching downwards. Following their logic also resolves the segments around the pair of 3's. 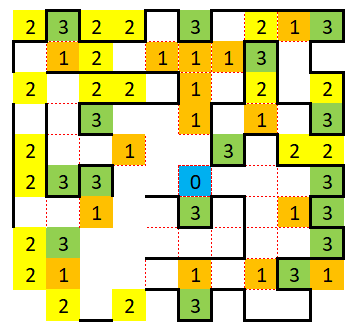 (i) We can also then extend the line from the first 3 in row 4, ultimately linking it with the 3 directly below the 0. 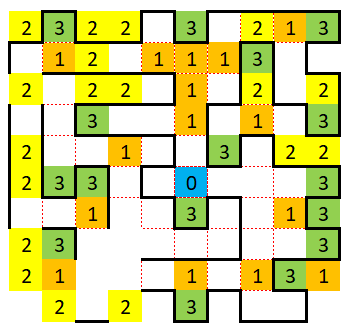 Finally, consider the bottom-most 3 in column 2...

(j) No matter where its missing segment goes, there must be a segment to the left of the bottom-most 2 in column 1, to ensure continuity of the line.

(k) We can now see that if this 3's final segment is at the bottom, we end up with contradictions when attempting to snake the line down into the bottom-left corner and then past the first 2 on the bottom row. Instead the 3's final segment must be to its left, and the rest of this section resolves itself by forced logic.

(l) All that remains is to fit the two segments around the first 2 in row 3 in top-and-bottom positions, to ensure that the line forms one continuous loop. 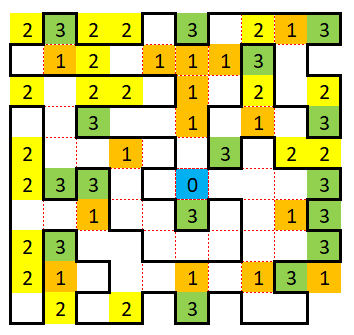 Green cannot be zero. Because of the green-yellow-green on the right edge, yellow would have to be 1 (because only its left edge is accessible), but then the yellow to its left would have 3 edges going into it. 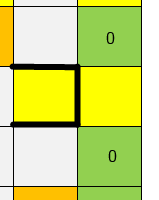 Similar logic in the top left shows that yellow cannot be zero.

If orange is zero, then by the top right, green is 1. This means that the green in the second-last row cannot be satisfied, though: if its top edge is used, then an edge gets stuck on the right. If the bottom edge is used, then you create a tiny 2x2 loop. Either way there's a problem. 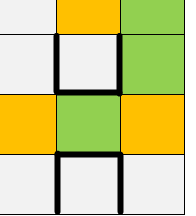 For the second step:

You can never have three 3 clues in an L shape in a Slitherlink puzzle. This rules out orange and yellow for 3 immediately, meaning green is 3.

And for the third: 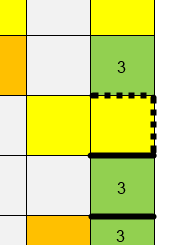 The solid lines come from the stacked 3s on the bottom. Of the two dashed lines, at least one must be used based on the top 3 clue. So yellow is 2, and by process of elimination, orange is 1.

Now that that's done, the puzzle can be solved with relatively straightforward Slitherlink logic. The solution is below. 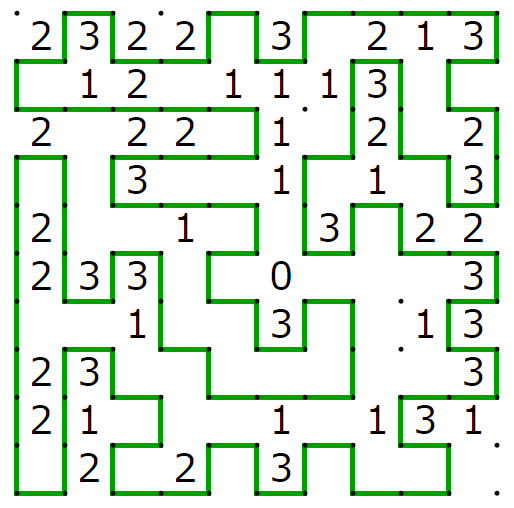 (Slitherlink as a genre doesn't particularly lend itself to full walkthroughs. If you're looking to try this puzzle yourself, it helps to start on the right side (the aforementioned stack of 3s), and extend in both directions from there. A few times, it helps to use a common parity deduction: for any region of the grid, the loop must enter and exit that region an even number of times.)

Not the answer you're looking for? Browse other questions tagged slitherlink or ask your own question.