"It's been weeks. This is taking too long. We finally rounded up the four suspects - the four people seen ducking into nearby shops right around the time of death - got their statements and still don't know who the killer is. You were the first officer on the scene, right? You said you were nearby and saw someone with baseball cap and green clothes going in to the deli?"

"Right. And from other witnesses, we have that among the four, each went into a different store: the deli, the pharmacy, the clothing store and the grocer's. Each had a different color of clothing: red, green, blue and yellow. Each was carrying something different: nothing, a shopping bag, a backpack and a briefcase. And each was wearing a different hat: none, a baseball cap, a cowboy hat and a beret."

"All we really have to go on are their hazy memories though.

Arden said, 'I didn't have a hat with me that day. ... I don't remember where I was around that time, not the grocer's though. ... I saw a couple other people walking around. One heading for the pharmacy had a cowboy hat. The other was wearing green.'

Blair said, 'I went to the grocer's that day. ... I remember seeing someone with yellow clothes carrying a shopping bag, and someone with a beret going in to the clothing store.'

Channing said, 'I remember going to the clothing store. ... I don't think I was carrying anything at the time. The only other person I saw was carrying a briefcase into the pharmacy.'

"That's not much to go on, but it has to be one of them. They were the only ones in the right place at the right time."

"Yeah. Something about this doesn't add up though. Someone's lying and I have a feeling whoever it is is the killer."

This is version 3. The first had no solution, and the second had two. Sorry about that. I've also taken other suggestions for improving the question in the process.

We can immediately limit our options:

The officer, Blair and Channing cannot all be telling the truth. It only requires determining which store the grocery bag was in. According to Blair, it cannot be the grocer (or Blair saw his reflection!), nor the clothing store (as Blair describes that as a different person). But they are wearing yellow which means they aren't who the officer saw enter the deli either... so they must have entered the pharmacy. But Channing said the person entering the pharmacy had a briefcase. Problem.

If we take the officer, Arden and Blair... we have a similar problem. Let's look at hats in stores: The officer says the cap is in the deli, Arden says the cowboy hat is in the pharmacy and Blair says the beret is in the clothing store. This leaves no hat being at the grocer... which is a problem because Arden had no hat and Blair was at the grocer!

If we take the officer, Arden and Channing... we can say that Channing was wearing some kind of hat at the clothing store (because it was Arden without a hat), but it was not the cap (which was in the deli), nor the cowboy hat (which was at the pharmacy). That would make it the beret. But this leaves the person with no hat in the grocer - the one place Arden (Mr No Hat) is sure he was not!

Well the only person in common in all 3 logic mistakes is the officer. Can we eliminate them and have the story make sense? I tried fitting all this into a logic grid ignoring the officer's statement, and...

(FIXED EDIT: To include everything I knew at the end) 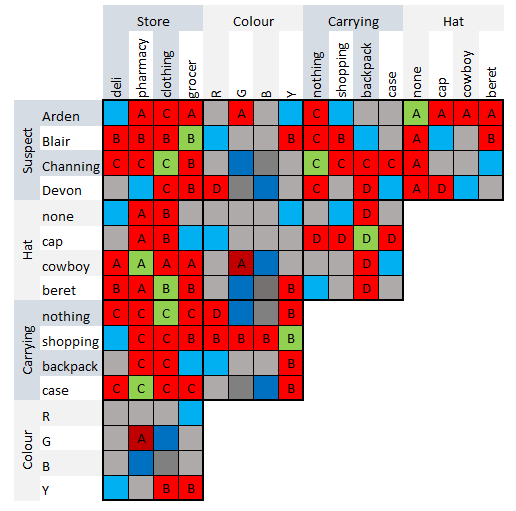 red and green blocks inferred from statement by person whose initial is in the box. blue and grey are inferences based on the joining of all statements. Darker squares added after my eyesight was corrected in the comment! :P

28
Five hats and four logicians in a circle
19
The Pirates of Beal Isle - very long logic grid puzzle
3
The mysterious theft in the Nigerian ship
11
How do I solve this logic puzzle?
13
A 3-person hat puzzle (no, not that one) (no, not that one either!)
7
Who owned each heirloom?
4
Guess the hat colors - Riddle 2
4
Einstein's Puzzle with 5 furniture customers
3
A Fateful Day at the Theater