Find your way through the five rings

I am trapped in a cage full of animals and all exits have been sealed. At the end of a long path, there is a sealed six-foot iron gate with 5 rings as shown below. Each ring contains floating letters, but they are not moving. Inscribed above the rings is the message "Speak the password and you may leave."

Help me get out by solving the challenge and discovering the password! 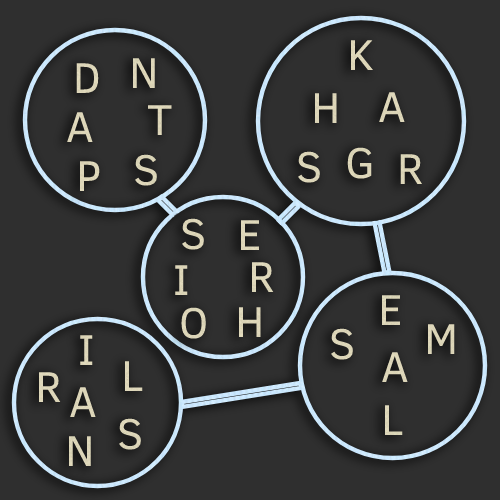 There are $\text{six}$ animals in my enclosure

There are signs telling me to stay on the paths and I must follow all orders.

Credits to @Amos Zoellner for the first part

Following the trace for each word gives us a letter : so for the 5 rings we have : REAYD which anagrams to "ready". 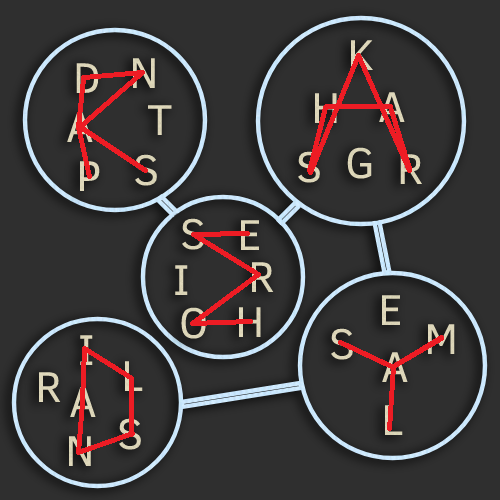 Following the trace was hinted by hint 3
As confirmed by the author, the password is indeed "READY", you can then exit the cages, not without forgetting a final pet to the Llamas.

If the password is not an animal, I suppose it is

As we can find

animals of six letters in each cage (5 letters plus the plural s), doubling one letter in each except the cage with only four letters, where 2 letters must be doubled.

one letter is doubled once (except the ring with only 4 letters where two letters get doubled) and one letter is not used. The unused letters are T,I,G,E,R; so it seems the password is TIGER - but that is just another animal in the cages, I suppose. However, the doubled letters are ASSALS, which anagrams to SALSAS. The password perhaps? Or is this the wrong direction... Or salsa, if we give an 'S' to the tiger to match the others... Dk found that the words form letters when traced, D R A Y and what is either a sigma, a sideways M, or an oddly drawn E. So either their answer is correct (likely), or I would suggest any of: deary, dreamy, yard, or my favorite, Summer Day (sigma as sum + R + day...).

6
Finding Mr. Rich's Password
15
Seeing through your dollar
26
Stargate escape
5
Help, my life is in danger!
12
Find the woman/man of your dreams!
32
Snakes on a Plane!! 2
11
Welcome to the Cubic Zoo!
15
Find the hidden message in the Tetris grid
13
My Exciting Travel Adventure
3
No Sound in Space