Inspired by my struggles with a certain open-source online learning platform's grading system:

You are working in a computer language with a limited set of built-in functions. You have a set of $m$ real numbers $x_1, x_2, \dots x_m$. These numbers are in some arbitrary, unknown order (i.e., they do not necessarily monotonically increase or decrease.)

The functions that are you can use are:

Extend your method to return the $n$th smallest number among the set.

My intended answers for both questions use only max, sum, and arithmetic operations. However, if you can come up with a more elegant answer that uses other built-in functions on this list, it would also be of interest to me. :-)

The best I can come up is this:

Finding the minimum sum of two numbers, then subtract it with the smallest one.

So for the $n$-th smallest:

and for $3$rd smallest number it would be similar

just each "set" would contain all numbers except two - and every combination of that, so number of sets would be something like $(m)$x$(m-1)/2$.

and for $4$th smallest number it would be similar

This solution was originally inspired by athin's solution, but with an improved way of generating the sum of the two smallest numbers. Now, it is a variant on Bass's solution since, as suggested by them in the comments, we can change the sum to a max, and then we don't need to subtract the smallest number at the end.

Here's why this works:

Here's an example of the finished formula for $m=8$:

And here is a diagram of that solution drawn by humn: 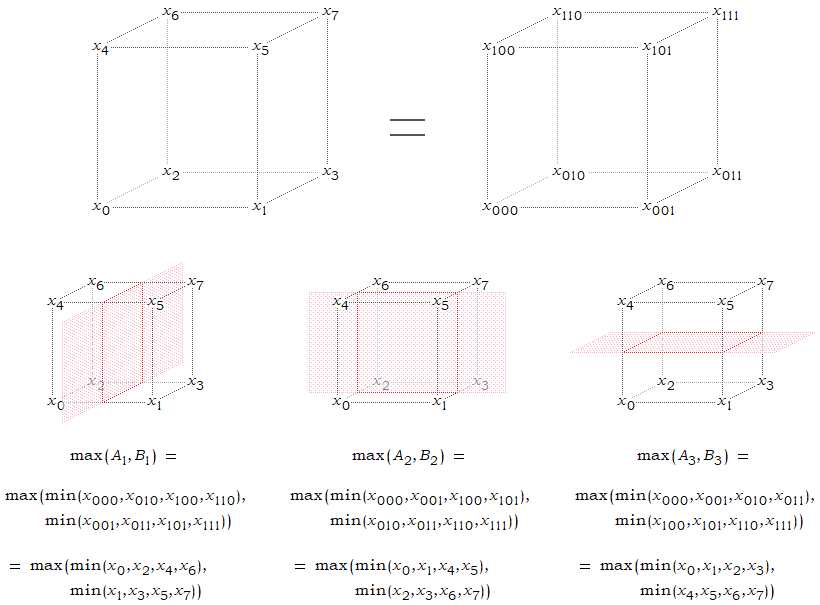 We can sort of generalize this to an $O(m \log m)$ solution for finding the $k^{\text{th}}$ smallest element, by relying on a Math.SE answer written a year ago by a clever and handsome individual.

To make sure this always happens, we generate many clauses at random: for each $i \in \{1,2,\dots,m\}$, we choose (independently and uniformly at random) to put it in one of $S_1, \dots, S_k$. As shown in the Math.SE answer I linked to, if we generate $\frac{k^k}{k!} \ln \binom mk \approx k e^k \ln m$ clauses, then with positive probability it will be true that for any $k$ variables, there's a clause that separates them. When this happens, our final formula will be the min of all these clauses.

Here's yet another approach. It kind of sits between @athin's and @Jan Ivan's methods.

It's based on the observation that the second smallest number is

the smallest number that is bigger than (or equal to) some other number.

This means we can do

To double check that this works, we only have to notice that

the smallest number will never show up as one of the max()es, unless there's a tie for the smallest, which is exactly the special case when we do want it to show up.

Not the answer you're looking for? Browse other questions tagged mathematics calculation-puzzle computer-puzzle or ask your own question.