Can you translate these sentences from an unknown language?

This is a puzzle based around a fictional language. The goal is to learn the language well enough to provide a close English translation of the 4 goal sentences. You do this by cross referencing the various pieces of information in the linked Imgur album (size limits prevent me from posting here directly) and inferring the meaning of the various words. There is not enough information to conclude the meaning of every word in the album, but there is enough to solve the 4 goal sentences (though (C) is particularly difficult).

This is the first puzzle I've done like this, so I have no idea if it's too easy or too hard. I suspect that it will be fairly easy for people already versed in constructed languages or cryptography, but relatively difficult otherwise. Please let me know what you think!

The imgur link with clues & directions is here: https://imgur.com/a/efziikZ 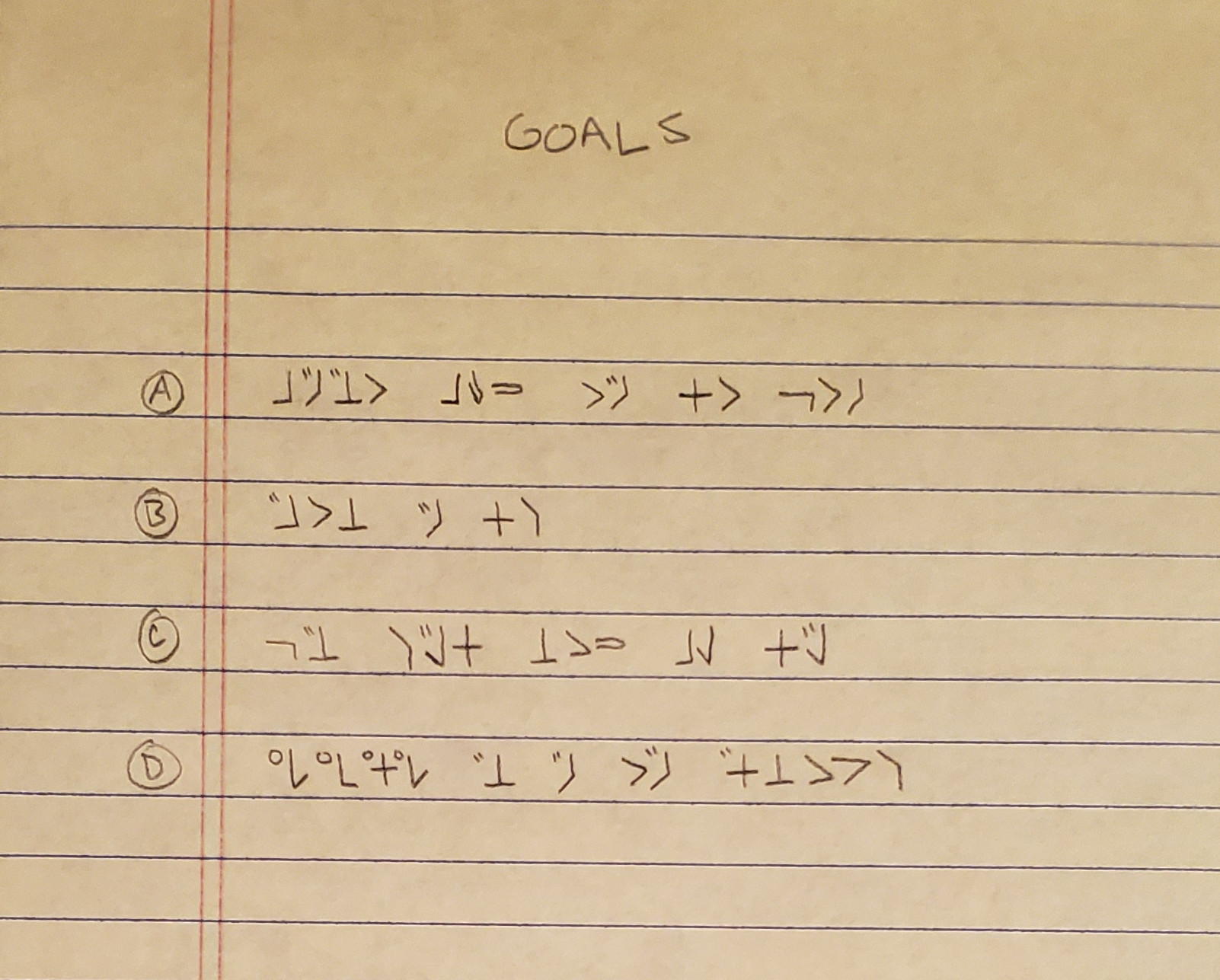 Some background info not directly related to the puzzle:

This puzzle was produced as a brainstorm for a videogame concept I've been tossing around. The goal would generally be to explore a ruined civilization and learn their language, culture, and history. The concept of telling a story that you learn the gradual complexities of as you learn the language is very interesting to me.

I'm hoping to get some constructive feedback about this puzzle and get a sense of how interested others are in the idea, how people reason about puzzles like this, and how difficult others find it. 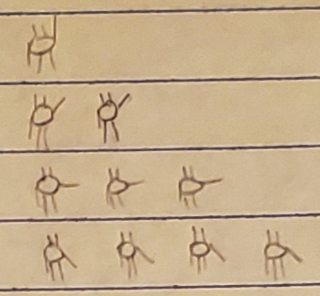 The top-right of the page shows "one, two, three, four", and their corresponding angles. This solidifies the association between directions and numbers. 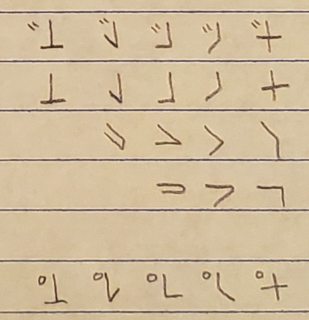 Below, we see what looks to be an index of every glyph in the language. It looks like the number glyphs are based off of what will be letter glyphs -- or perhaps syllables, since they're arranged in a 2D grid that would work for a syllabary.

It appears we've been given some drawings. Each "caption" has a single word, as well as what looks to be a longer sentence starting with the word.

This gives us some vocabulary! (Scrolling down, it appears that OP has provided a transcription chart for the symbols. I don't think this was strictly necessary, but for convenience I'll be using that, with the minor romanization difference of "sh" becoming c (so each syllable is two letters).)

We have a picture of a bug-thing (likely the alien species in question?), with the caption:
ca sucicati suteku
And below, a bug holding up a rock next to a cart and mountains:
ca toceso suteku suse socuti
Hey, we know the word socuti, and the word suteku repeats there! It looks like suse means something like "by" or "from". toceso could mean a number of things: "holds", "displays", "obtains"... but it does appear that ca and suteku mean "bug-person / I" and "rock", in some order.

We've been given a map, with a helpfully labelled compass and some sentences that presumably describe the map locations. Hopefully we can get some grammar out of this.

The title is cosatukito - presumably this means either "map", or the name of this region. I'm going to translate as "map" for convenience's sake for now.
2 kotisi ci tici cosatukito
2 lake [???] [???] map -- "two lakes are on the map"? This would mean "tici" means "on" (in the sense of "depicted on", not necessarily "physically on top of"). And then "ci" is "is"/"are", but right now we only know that it's used for location. I'll translate it as "lie" for now.
cutisa sesu tici sotu kotisi
river [???] lie east-of lake
socuti ci sote
mountains lie north - this shows that directions work as multiple grammatical parts of speech (or would correspond to multiple English parts of speech, at least).
ca toceso saca suse sote cutisa
[bug-person/I] [hold/display/obtain/have] [???] towards north-of river
ca toceso kocati suse soti kotisi
[bug-person/I] [hold/display/obtain/have] [???] near east-of lake
ca ci tici cosatukito
[bug-person/I] lie on map

So, the sentences to be translated:

(A) sucicati suteku tici soti kotisi
throw rock near east-of lake. It isn't quite clear what the verb without a subject means here: it could be a command, or it could just be a statement about an unknown subject. It's also not clear whether "to the east of the lake" is where the thrower is meant to be, or where the rock is meant to land.
(B) cutisa ci soto
river lies south - "A river is to the south".
(C) koca toceso satuku suse soce
[???] [hold/display/obtain/have] [???] [???] [???] - This uses a bunch of the words that only appear once in page B, and it is very unclear what those are supposed to mean. I'm not sure of any ways these could be figured out.
(D) 327 ca ci tici cosatukito
327 bug-people lie on map - something like "327 bug-people live in this area of the map", presumably.

These translations don't quite work. After a while, I noticed that one of our words from part C was also in part B -- this should finally help explain what B is trying to tell us.

Note that one of the sentences from part B is "rock [ci tici] mountain". This suggests a better-looking translation for toceso and suse -- namely, "gets" and "from". This means that the sentences from (b) were telling us what each of these is made of.

With this, the rest of the words work out, and we can get a nice translation for each of the sentences: 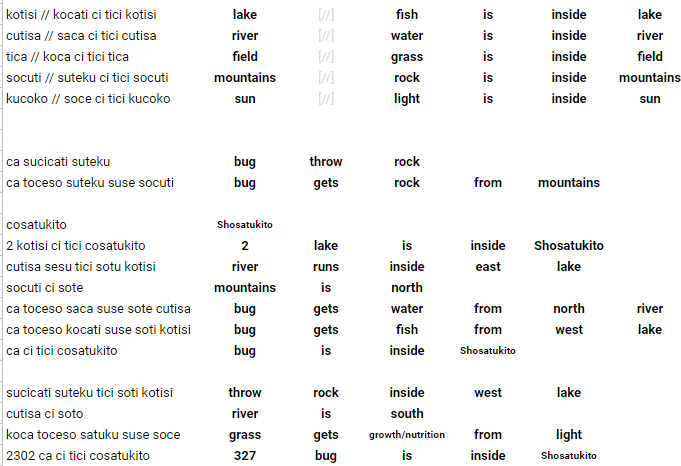 Here, I've updated cosatukito to be the name of the region (transliterated as "Shosatukito"), and confirmed ca to be the name of the bug-people rather than a personal pronoun. This looks to be a fitting translation of all the words we've seen in the language. It's possible that there are some minor differences in the way some of these words should be translated, but the general ideas should be correct.

A lot of this seems very English-y. Left to right, adjectives before nouns, prepositions before the words they modify, words directly translate as a single English word... and the verb without a subject in sentence (A), which I assume we're supposed to translate as a command. I'd recommend looking at how other languages do grammar - the International Linguistics Olympiad is a great source for fantastic language deciphering problems like these, and it also gives a good view of the interesting ways other languages mark things, or divide them up semantically, when we English speakers wouldn't even think of that as an option.

The syllable choices are also a bit strange. Even given the "missing" syllables, they're very regular. If you want a natural-seeming language, four consonants is way too few, and consonants should be spread out more: /s/ and /ʃ/ both being phonemes can't last for long at all. They would likely either merge into a single phoneme or diverge in a very short period of time. (Of course, I don't think it was really necessary to provide those to begin with: solvers will be able to create their own transcription systems. But the small variety of syllables is still pretty unnatural.)

I do think this is a good idea though. I always enjoy linguistics-related puzzles, and I've thought about similar projects myself. I'd love to see more done with this.

Progress so far after some time working on this. I'm currently stuck on what the long passages on the geography and map pages mean, I have no idea where to start with those or what they are trying to say. But this is a great puzzle and you've thoroughly stumped me so far! Will update if I figure out anything more.

(A) throw (judging from the throwing picture, which seems to be "being throws rock" or something along those lines; could be wrong here) rock (throwing rock and mining rock clues) ??? (context would suggest "into"?) west (compass on the map clue, this symbol is placed where "west" would be) lake (from lake picture title)

(B) river (top label on the river picture) ??? (context would suggest "is" or "goes"?) south (compass on the map clue, this symbol is placed where "south" would be)

Not the answer you're looking for? Browse other questions tagged language difficulty-rating or ask your own question.

8
Youre a big drinker right? Can you interpret for the drunk?
19
Deer-hunting in Mesak
6
Can you solve this rebus puzzle 2?
6
Little Pictures: Charlie's Lunch Edition
4
Translate this "especially important" note from "War with the Newts"
6
Translate a new language