People seemed to enjoy my last Sudoku variant puzzle - Samurai Pseudoku, so I spent this week making another! This one is going to require using logic you've never used before...

The last one was a little plain, don't you think? After all, it was just a flat puzzle, only a couple of variants and don't even get me started on the colour scheme...

So this time, this is Sudoku in the third dimension! But wait, I just hit you with a double meaning; not only is this puzzle 3D, it has 3 different dimensions to it, in the form of 3 different Sudoku variants: 3D, Vudoku and 147.

The rules will be explained under the grid, if any clarifications are needed please just ask in the comments!

Oh.... and I forgot to mention. The last puzzle had way too many digits, so this time I'm only giving you one digit: 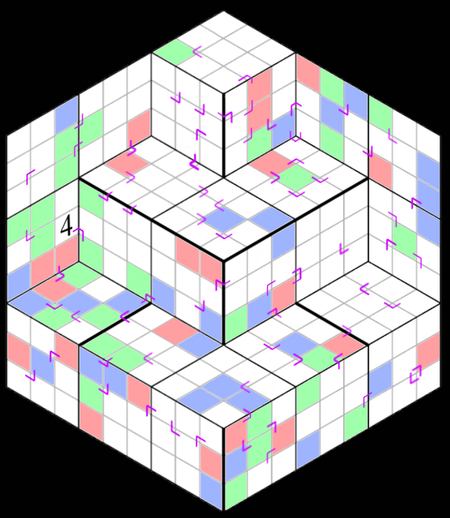 There is a single solution that can be deduced logically with no guesses.

A solution will be accepted with:

The previous puzzle was probably too large and as a result became tedious towards the end, so this is a bit smaller. This is still a very hard puzzle however, and it's going to require some different ways of thinking. 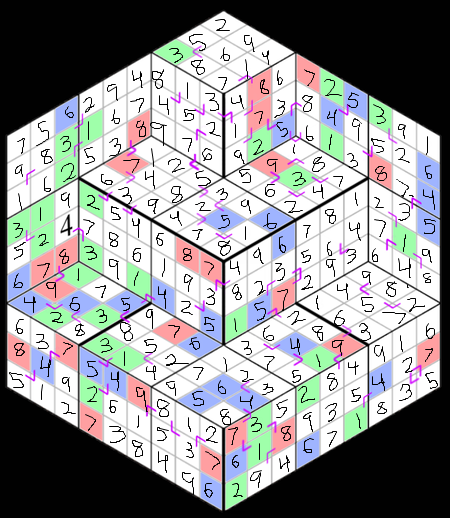 There were a LOT of deductions to make here. I'm not going to give step-by-step, but I will show several milestones along the way. I'll explain some of my favorite (read: head-bangy complicated) deductions and some common deduction types I used a lot. Unfortunately, my pictures and my favorite deductions do not always match up.

Picture after I got the starting area: 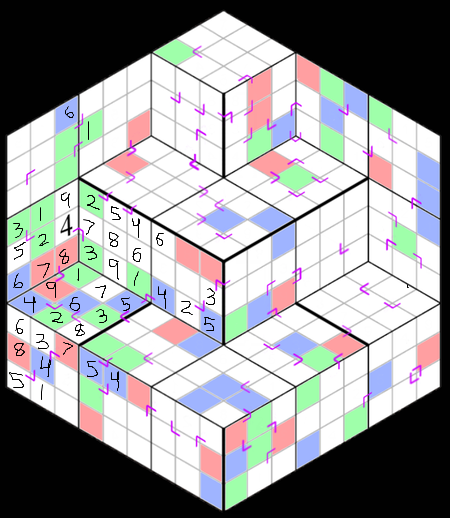 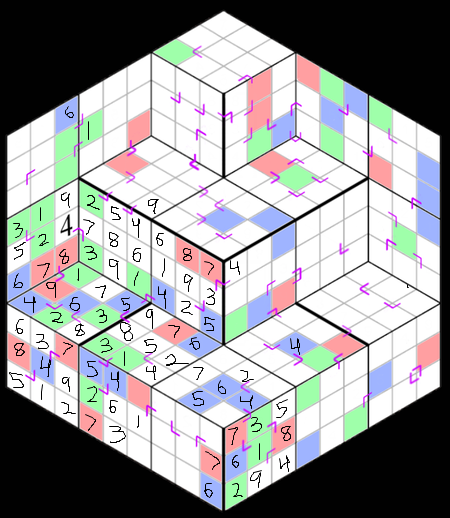 One of my favorite deductions has already passed, sadly. (I was re-doing this off my notes after running into a contradiction the first time through. So I didn't get stuck until later, and forgot to take the proper pictures). I'll paint the scene for it anyways. See the box with 1-9-3 in the middle row, 2 to the right of the starting box? The 1 was already there. And see the 5^3^8 a box below? The 5^3^? was there. I had to figure out whether the ? was a 2 or an 8. In the "column" with the aforementioned 1 and ?, there are 2 greens that were currently blank. The 2 for this column must be placed in one of these greens. So the ? cannot be 2, it must be 8!

Where I got stuck

Picture of the state at which I made this deduction: 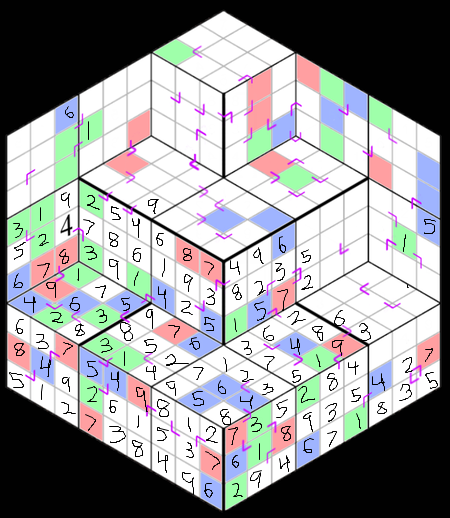 Right before this deduction: 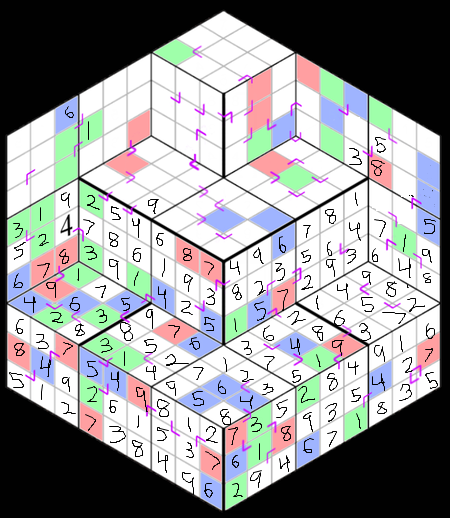 The end is in sight!

A picture of near the end 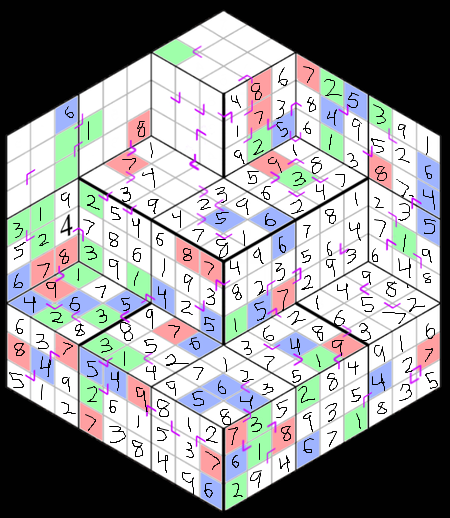 I'll be honest, I had trouble figuring out an interesting deduction to showcase near the end. I was pretty used to the logic by now so I didn't really get stuck. This one is neat but quick.

All in all, this took me about 4 and a half hours of actual solving time if I remove breaks and don't do my math wrong.

It seemed people appreciated my 'The making of' post for the previous sudoku variant, and as I thought this one was much trickier and complex to make I thought I'd post another insight into the creation process.

This answer may spoil some of the reasoning that bobble will update their answer with. Click the link on any image to see a better resolution version.

Wrap-up: The Making Of 'Sudoku in the third dimension'

I also decided to try and play on 'three dimensions' by adding 3 Sudoku variants to the puzzle. However, I didn't want it to be overly complicated, so with 3D already being one of the Sudoku variants, I needed two that would work easily together while not being too complex.

Using the same app as last time, I went through all the variants this time and found 'Vudoku' and '147' simple but fun variants that also wouldn't get in the way of each other.

Once I had found the 3 I wanted I got started.

I couldn't find a 3D sudoku editor online or even the 3D Sudoku type I wanted, so the base image in this puzzle is actually a modified screenshot of a 3D sudoku that was close enough to what I was looking for.

The issue I had from the start was the lack of software to make this puzzle. I couldn't use Excel as it had no 3D option, so my only option was to use a photo editor (I use an app called 'Sketchbook'). This meant I knew this would take much longer to make.

The amazing thing about 3D sudoku, is that no matter how you create the 'collapsed' cube, every single cell will be part of one box and two paths. The problem when creating a solution however, is that filling in certain cells in two different places may make it impossible further down the line, so there was a lot of backtracking in the creation.

I started off simply and filled in the left and at this point, I just had to make sure I obeyed 3D rules, as there was little chance of a contradiction. I managed to fill in the left hand side with just one contradiction which luckily was easily fixable at the bottom middle. 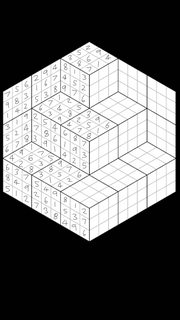 The second half became the issue. I encountered a lot of contradictions, but managed to figure out a way of entering which would let me pick up the contradiction before it happened. I did this simply by looking at what each path needed, and making sure there was no cell in an upcoming box that had all 3 of the needed numbers in the other path that crossed over that cell. This allowed me to have to backtrack less and I managed to fill in the solution: 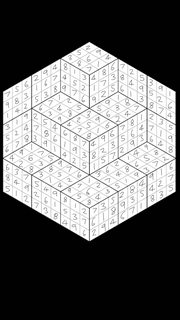 To start entering clues I set up a blank grid next to the solution which would slowly get filled in with clues over time. I would also 'solve as I go' to see what numbers still needed to be clued: 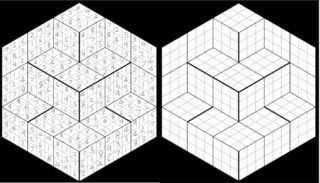 I realised at this point that it would be a huge hassle entering and then skewing numbers for clues, so this is where the idea that I would give very little numbers came from. The original idea was to actually give 0 numbers.

The only way (I'm sure there's more however) I could think of being able to clue a number was to find a box where there was a $1$ and a $2$ in an arrowhead between two numbers of the same colour and give all that information.

This scenario only occurred in one box, the one below the box with the four. I filled in this information and it allowed me to clue another $3$ by putting the places of greens in the above box where the $3$ ruled out 2 of them. I realised at this point that it probably wasn't possible to clue the whole puzzle without at least one number.

From there I could add some more clues to be able to resolve some more numbers and reached this stage: 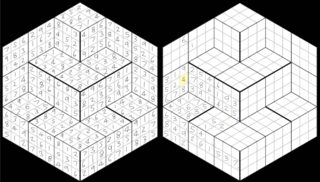 After cluing some more so that several boxes could be filled in, I came across a stumbling block. I couldn't actually clue the top left with the information given. I didn't want to give any more numbers so instead I decided the 'solve path' would be to go round the bottom, and up round the right and hope that it was clue-able such that you could go round the grid and the top left box would be one of the last solved. Luckily this was the case!

I got round the bottom clueing without any major issues, but then I got to the top right. At the top right of the grid, you have to 'turn' around a thick black line, meaning you only have one path that is providing any information. This was incredibly difficult to clue and I had to look further down the path before I noticed anything that could resolve a number.

It took a while and I had to provide a lot of clues, but I knew that was OK, as I could tell it was still difficult based on how difficult it was to clue.

I managed to sketch the clues in that I needed: 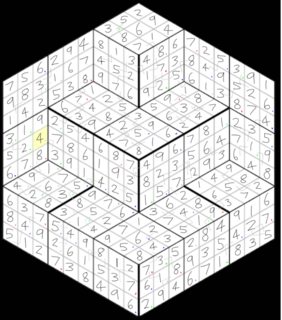 and a quick double check verified my solution matched.

I didn't want the actual puzzle to look scruffy and hand-drawn, so I saved my clues and opened a blank grid and started filling in the clues neatly. I also decided to just fill in the cells with the appropriate colour instead of doing a little dot in the corner.

Cleaning up took forever, and I initially missed a lot of clues I had hand-drawn so had to double-check four or five times to make sure it was right. Once I was happy I had all the clues in, I just needed to double check.

Aside from double checking my solution and my clues, I needed to make sure the puzzle was solvable. I printed some blank versions, and managed to solve without any problems. I also got my parents to solve just to make sure it was solvable.

This also allowed me to gauge the difficulty, and I was happy to find it was quite hard and required some very tricky logic!

Some things I have taken away from creating this puzzle: (a lot of the previous points from the last takeaway also apply)

I hope this was helpful and the puzzle enjoyable. I personally think this was much harder than the last one (it was certainly harder to make!!) but hopefully it was just as fun.

I may make one more of these to complete the trilogy, but it may be a while as I want to come up with an idea that's a bit more concise but with even better logic :)

Any feedback on this would be much appreciated! (negative or positive, how this compared to the last, any improvements etc), and thank you all for solving!