As a professor of Awesomeness at the prestigious Ad Hoc University (other questions in this series), I decided to assign my students this puzzle. Unfortunately, they were all unable to get it! I want to post it here to see if any puzzlers can get it.

Suppose I've defined an operation that takes in a 5x5 grid of booleans (or 1s and 0s) and outputs a number which represents its score. Here are some examples:

Your job is to tell me how I score my grids!

You score your grids by

Running them on a 5x5 Game of Life!

The score is calculated from two pieces:

The time until the pattern becomes stable, plus the number of cells alive at the end

As the answer from @StephenTG states, the secret is to

interpret the grids as cells in Conway's Game of Life (a thought I'd had, and intended to investigate further this evening)

it is run on a finite 5x5 grid where all cells outside the 5x5 area are considered to be permanently 'dead' (one common alternative is to run it on a toroidally-connected grid, but this is ruled out because several of the patterns shown would have different behaviour on such a grid).

Implementing the necessary calculations in Excel: 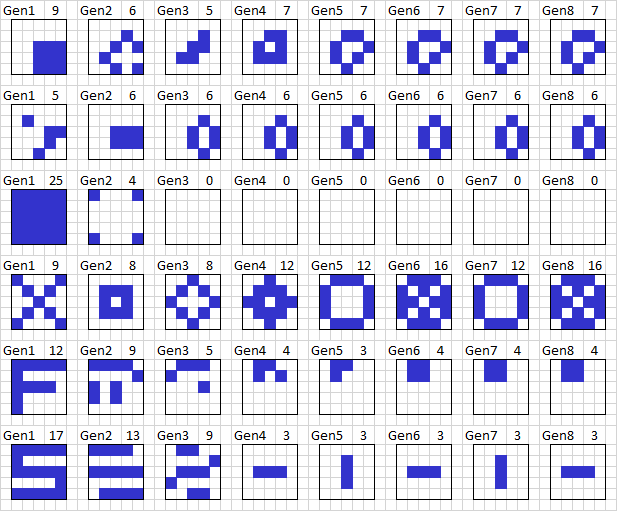 We can see that, as also stated in @StephenTG's answer,

... and revisiting it a little later, some minor tweaks improve this: 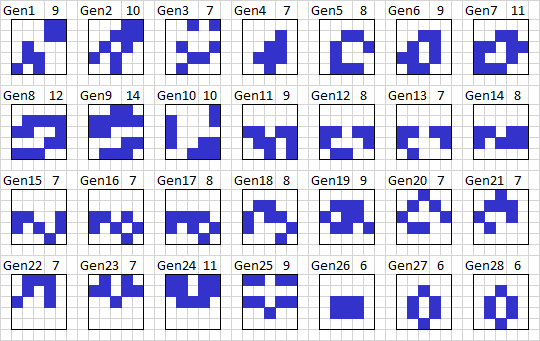 Later, I finally got round to doing an exhaustive computer search for better solutions. The most relevant part of the output

shows both the longest-lived starting state, and also the highest-scoring (subsequent generations are left as an exercise for the reader):

5
Are we scoring numbers now?
4
Grading quizzes... except words this time!