Eight campers and the right path

In the spirit of some of my Raymond Smullyan favorites, here's a relatively hard puzzle from a Dennis Shasha collection of $1988$:

Eight kids and their guide are lost on a forest exactly one hour before night falls. They are on a glade from which four paths leave. The guide knows that one of the paths leads to the camp site in exactly $20$ minutes but doesn't know which one. 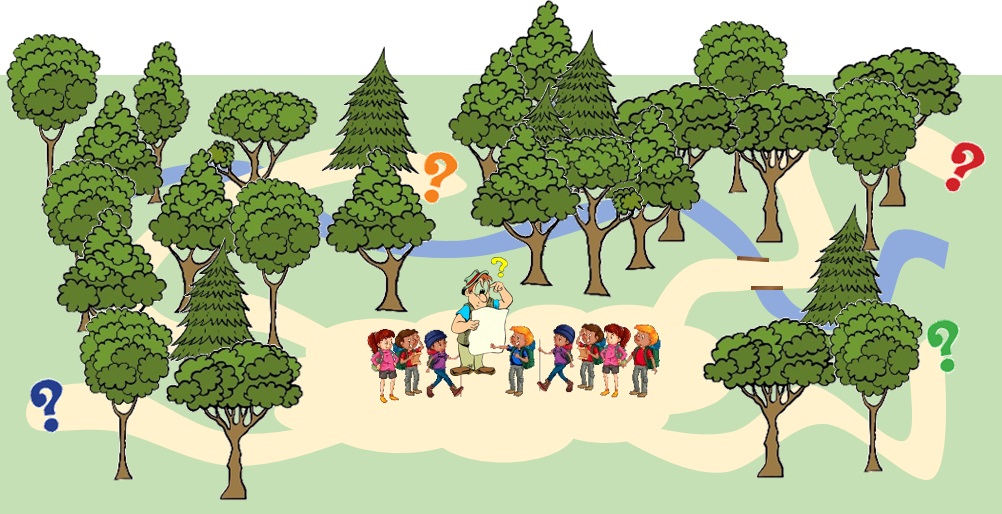 The guide thinks that the best solution to find the right path is send small groups of campers (where he could include himself) for $20$ minutes, then the groups turn back to the glade, share what they found with the others and finally, thanks to that information, they pick the right path and use the last $20$ minutes before night falls to reach the camp site.
It could be an easy foolproof plan, but the guide also knows that two of the eight kids (not which ones) like to tell lies one in a while.

How should the guide divide the groups to find the right path using this plan?

Since I didn't do my homework correctly (I didn't search properly for a duplicate problem - here), I decided to investigate a little variant so we don't waste this space on Puzzling. Here it goes:

When the guide was ready to send the groups on their mission, he realized that the two possible liars were on the morning group. The group he was dealing with had three compulsive liars (they always lie) and two of them always walk together. Besides that, Martin, the youngest one, has to be part of a group of at least four people.

How should the guide divide the groups now?

Here is my answer for the new version of problem.

Split the kids in groups of sizes:

When the kids report back, there are the following possible outcomes.

A group may be unanimous, or split into two subgroups that give opposite answers. Here is a table of all possible ways the groups can split, and the unique arrangement of the liars in those groups:

The only tricky case is the 1+3 / 1+2 / 1 split, where the 1/1/1 arrangement of liars is not possible since you know that two of the liars will always be together in the same group.

If the group of size 4 splits as 2+2, then you don't know which pair are the liars. This does not matter however, as you have uniquely identified the liars in the other groups and so know what the real answer is for three of the roads, and the real answer for the fourth road can then be deduced.


NOTE: The answer below was for the original problem, which turned out to be a duplicate.

Split the group as follows:

One path is taken by the guide. The kids are split into two groups of 3, and one group of 2, and they go down the other three paths.

To recover the correct information from the kids' reports:

Let's call a group of kids inconsistent if they don't all give the same answers. Clearly an inconsistent group contains at least one liar.

If there are no inconsistent groups, then the two groups of three kids (and the guide) must be telling the truth. So three correct reports are known and the correct path can be deduced, possibly by elimination.

If there is one inconsistent group, then the other two groups (and the guide) must be telling the truth. Again you have three correct reports and the correct path can be deduced.

The guide knows that two kids can lie.

He divides the team in 3 groups of 3 people and explores 3 paths. This way, 7 people will always give correct info and 2 will/could lie. So when the groups come back from the "scouting" they'll give the feedback of what they found.

There are some occasions:

A group of 3 people, no liars -> Unanimous info

Now you just have to spot which groups have divergence of opinions and you'll spot who are the liars.

If after getting the feedback the guide comes to the conclusion that nobody found the way back to the campsite, then the path to take is the path that was not previously explored.

The guide will split the groups as such:

He then sends out the groups down each of the four paths, and when they return he has the following possibilities:

10
The Expedition Into The Ancient Cave

20
The Illuminati and the Knights Templar
6
Knights and Knaves in the Wild West
10
The Expedition Into The Ancient Cave
28
Council of Magic - a palace of deceptive spellcasters
21
Knights and knaves in Landilandia
16
Who led the mutiny?
14
Double Chocolate: Happy Valentine's Day!