“Ouch!” I moaned as I slowly regained consciousness. Someone had knocked me out cold from behind. I now found myself alone, trapped in a small square room. The floor was hard and cold, and the room was empty save some strange Mondrian-like paintings. My assailant clearly had a bad taste in art.

Unfortunately, this wasn’t his greatest flaw. As I was about to discover, he was also quite sadistic.

“Welcome back, lieutenant,” came a raspy voice from some hidden audio system. “You have been quite a nuisance.”

(That was an understatement. I had destroyed his laboratory of evil inventions.)

“But now,” he continued, “the time has come for us to part ways. Permanently.”

I scanned the room, looking for a way out. On one wall, there was a sturdy, metal door with a security keypad. One of the adjacent walls contained a reflective panel, presumably a two-way mirror so my tormentor could watch me. My thoughts were interrupted by a hissing noise.

“This room is starting to fill with a poisonous gas. You have approximately three minutes till your demise,” he chuckled evilly.

I began ripping the paintings off the walls, looking for anything that might assist me to escape. Nothing! The wooden frames weren’t very strong, so there was no use trying to smash the glass. Gas continued to vent into the room. I could feel my lungs burning. Suddenly the light went out. The darkness was temporary, as it was soon replaced by a pulsating light, which when combined with the gas was extremely disorientating.

I was just about to admit defeat and succumb to the gas when I saw it. My tormentor was evil and sadistic, but his disposition to give me a sporting chance may have been his one redeeming quality. I held my breath and forced myself to the door. I punched the hash key followed by the three digits. Success! The door swung open and I was greeted by fresh air. Time to run!

What keys did I enter to escape? How did I work it out?

The pulsating light wasn't just irritating and disorientating. One specific characteristic of this light was also crucial to solving this puzzle.

You can assume there were more paintings in the room than the three shown. You may not need to use all the three shown -- some may be red herrings, which is in itself a hint. (It will become very apparent what information is required when you get that 'ah ha' moment.)

This puzzle can be solved in one of two ways: using software of some description, or using nothing more than the image shown on your computer screen and a specific physical object you may have lying around your house.

See @Stiv's answer below for solution. The following is some extra explanation:

This is what the image looks like using a physical red filter, as soon through my smartphone's camera. Note how the "2" and "3" disappear, and the correct numbers stand out. (They would probably stand out more if the filter had a darker hue of red). 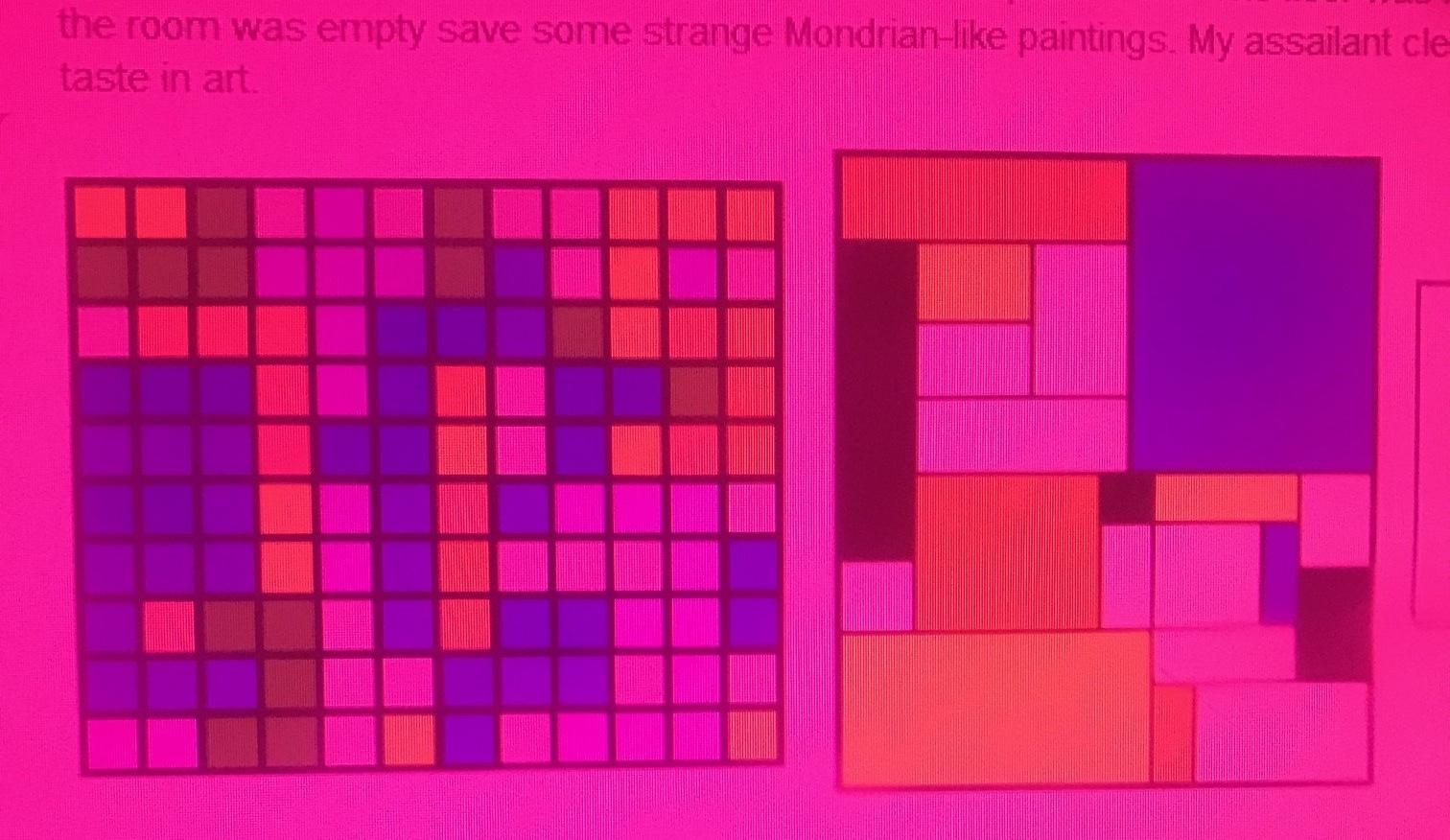 A similar effect can be achieved in image manipulation software. This effect is sometimes called the "red reveal".

Here's a possibility - the password for the door was:

The pulsating light helped you because...

...its wavelength emphasised the red and orange squares in the first piece of art, causing it to display like this: 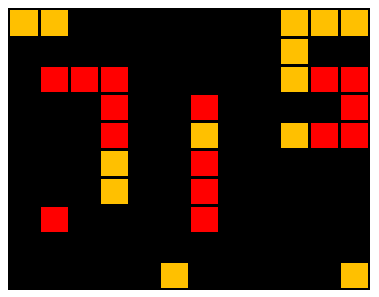 Here, the 3 digits of the passcode are easily picked out.

The mention of 'red herrings' in the hint has a few meanings:

1. The other two paintings are entirely irrelevant, providing no useful information for your escape.

2. There are other numbers visible in the first painting, for example a '2' in light blue and a '3' in purple: 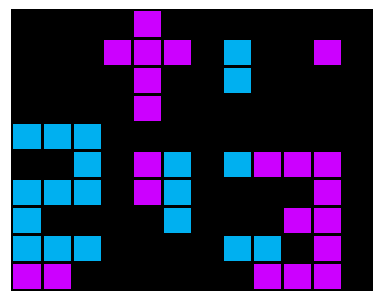 However, using these colours there is no third digit.

3. By alluding to 'red' here, the OP is directing our attention to the squares with a red hue.

Since the key is 3 digits and the hint 3 pictures, it is probable that each picture is responsible for 1 digit, although they might be related in some way. "Situation" tag also hints at a solving process relatively quick & simple.

Again, of the 4 colors present, black, yellow, and red each has 3 tiles while the light color blue (which perhaps not coincidentally is the same color of the "2" in figure 1) has only 2 tiles."2" is the odd one out.

Figure 3 is somewhat abstract, and I am not entirely sure how it relates to figure 1 and 2. But taken literally, it is one shape severed into 2. So 2 again.

Not the answer you're looking for? Browse other questions tagged pattern visual story steganography situation or ask your own question.