I've spent this week trying to create a difficult logic puzzle which is a combination of two Sudoku varaints, 'Samuari Sudokus' and 'Pseudokus', and this combo is unlike anything you can find online. The rules are under the puzzle.

Solving it myself when double checking took my quite a while, but was fun so hopefully this will be enjoyable! 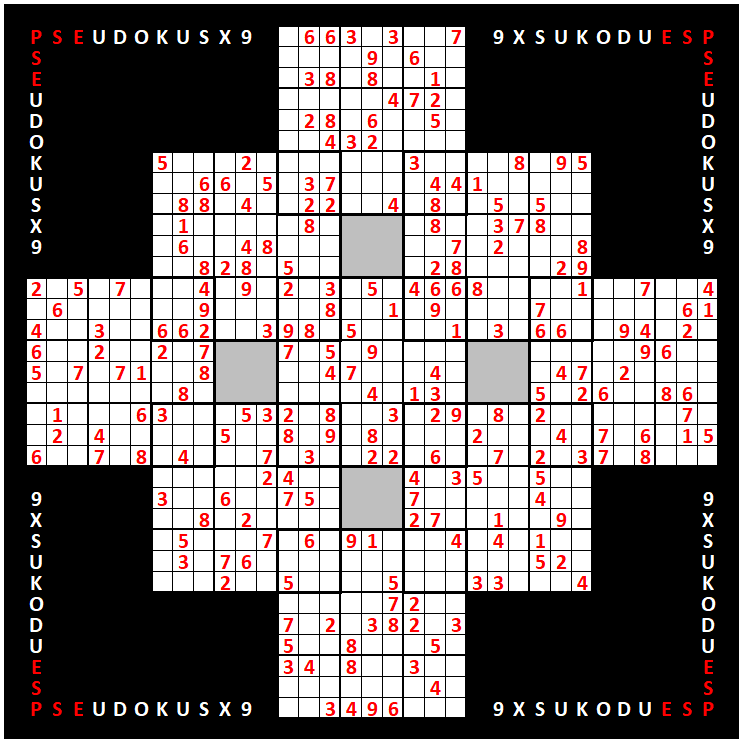 A full solution will be accepted with

Here is a link to the puzzle on google sheets, or alternatively you can download the excel file here.

This seems to fit: 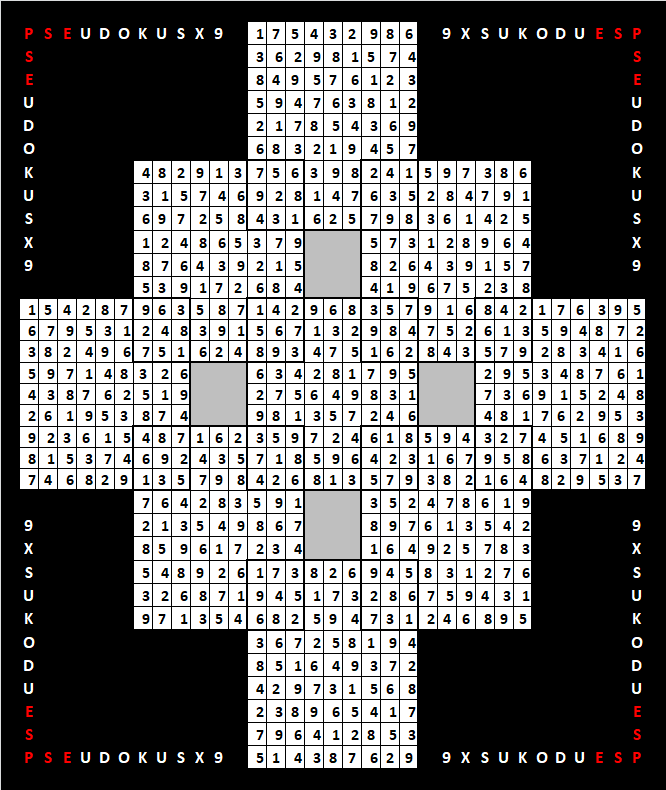 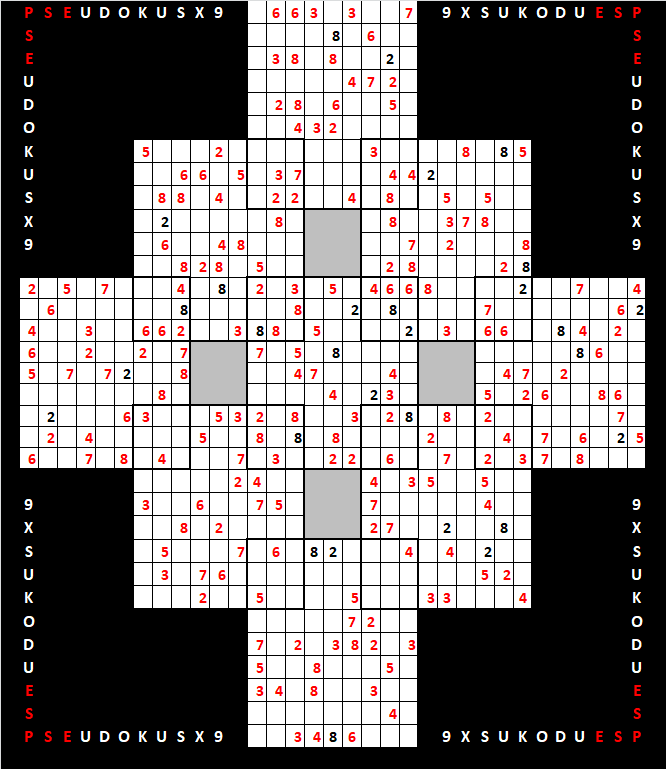 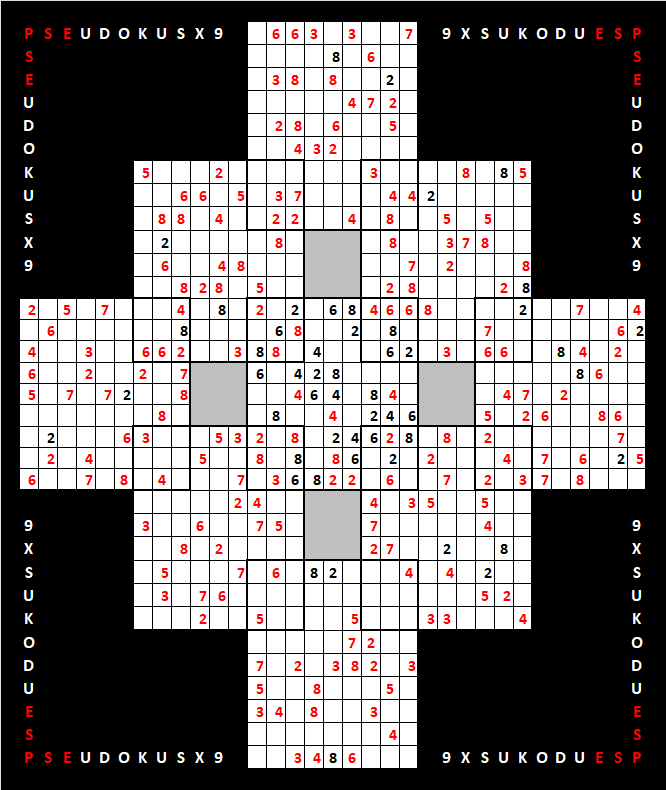 I then continued this process, using normal sudoku techniques as well. As there were only even black numbers to work with, I only replaced odd red numbers. Below is as far as I got this way: 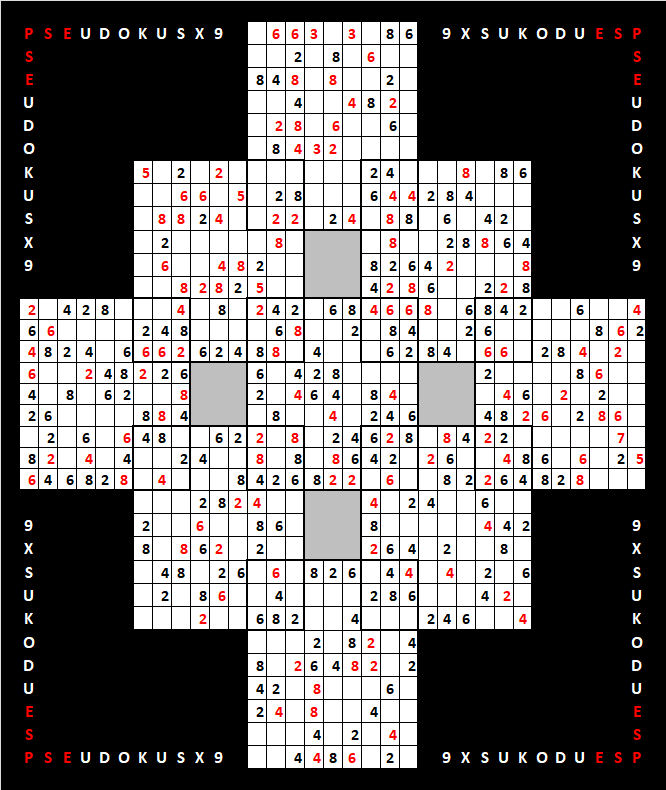 In retrospect it was a mistake to not try replacing even red numbers as well, as I would need to do this eventually anyway and replacing them could provide additional information. Below is a snapshot after I started this process: 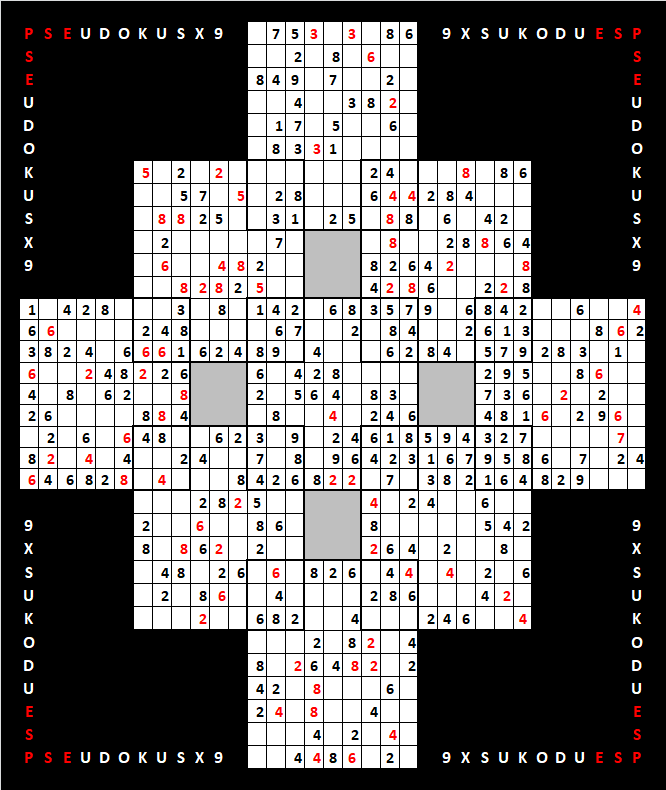 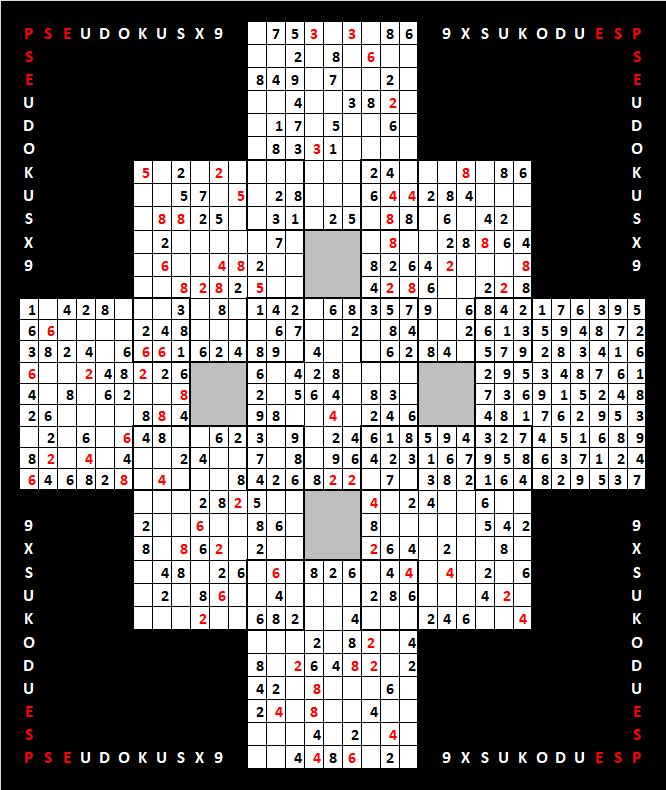 After this I completed each part-sudoku, one by one, until all were done.

Took about 5 hours all told.

An amazing new version of Sudoku! Should become a new stable in my view.

I have been asked by a couple of people to show the creation process for this puzzle, so here we go:

Also if people want to see more of these strange, Sudoku mash ups then I'll be more than happy to combine some new types :)

Wrap-up: The Making Of This Samurai Pseudoku

A big source of inspiration was from a place a lot of you might recognise, the youtube channel Cracking the Cryptic, which involves two world class sudoku solvers taking on the hardest and most clever sudokus around.

The majority of these sudokus are not standard, and involve certain gimmicks, the most common being things like a knight's move constraint, thermometers, no consecutive digits and so on. These new constraints force the solver to think about the new sort of logic that can be applied to the puzzle.

These puzzles really interested me, and having done lots of tough, but normal sudokus I set out looking for apps for my phone that had sudoku variants. This was harder than I thought but I eventually stumbled upon an app called Sudoku Mega Bundle which was exactly what I was looking for.

This app has 125 different Sudoku variations, which is unbelievable for a free app. There is a 'random puzzle' button, and I started trying out as many different puzzle types as possible. There's still many I haven't even looked at yet!

Anyways, I instantly fell in love with 'Pseudoku' which I found super fun and clever, and a whole new type of logic. It was at this point I started wanting to make my own, and I thought a simple 9x9 would be interesting, but rather trivial for the site. I wanted to make a sudoku that had never been seen before, that was difficult, that would provide a challenge.

I had already stumbled across 'Samurai Sudoku' - which wasn't my favourite, but I realised it would work very well with 'Pseudoku'. A larger puzzle would also be much harder that a simple 9x9 (there is over 600 cells in this puzzle compared to just 81!!) so I set my mind on this and started to make one.

For resources, all I used to create this was Excel. It's a nice simple place to work with cell based puzzles. I also used Sudoku-solutions to check my sudokus were valid along the way.

To begin with, I designed the grid. For added aesthetics, I added grey and black around it, and also added a border of 'PSEUDOKUSX9' around the edge. Towards the end I realised that 'PSE' was in there so I made that red just for the site.

After adding the borders in for each sudoku, I realised that it looked slightly confusing, so added thick borders around the edge of each sudoku. I think this has helped a bit, however it is still rather confusing to look at.

At this point I had an empty grid that looked like this: 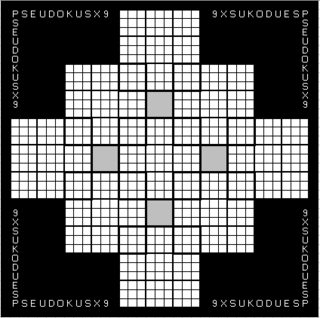 From here I needed to create an intended solution. At this point, all the sudoku had to do was obey normal sudoku rules, and I just had to be careful with the overlaps.

From here I filled in the top 3 rows, and then the leftmost 3 columns, and then 3 or 4 extra numbers in the middle. To get a full solution, I would first check with an online solver that there was only 1 solution and then solve it myself. And boom! First solution created.

Here's an example of what I would aim to reach:

I placed this in the topmost grid. From here I moved one to the right, then created that solution using the overlap as a starting point. After creating that, I realised the middle would be quite important so filled that in. I was careful however, as the topmost grid added some more restrictions into what I could make the top left box of the middle grid.

After this I went round clockwise until the whole grid was filled. For the majority of the grids, certain boxes would overlap and as a result there were added restrictions for certain boxes that you just had to watch out for.

I did make one error; when creating the bottom grid, I forgot to include the added restriction for the top left box from the bottom right box of the center, but luckily realised before I went any further.

I now had created the whole grid:

This was where it was going to get tricky however. I now had to remove clues such that it was solvable, while at the same time making it hard as possible, while also introducing the 'Pseudoku' numbers.

I copied the grid, and emptied it so I had the following set up (but at this point both of the grids to the right were blank):

This is where it got interesting, and where I imagine most are interested to see how I made this.

The left grid was the solution I wanted, the middle grid was the clues given that I was filling in, and I used the rightmost grid as a 'what can be solved using the clues I've put in so far' grid.

Basically the right grid was used to solve as I went along filling the middle grid in with clues. The left grid was for reference.

When I found 'Psuedoku' - I also discovered some interesting logic. 2 of the same number in a row/column/box will mean that any clue 2 more than those numbers can be resolved.

I also decided that, as much as possible, I wanted a grid on it's own to be insolvable without knowledge from overlapping grids. So when filling in clues, I also filled in a few numbers on surround grids that would mean a number could be fixed in the corresponding overlapping box.

I repeated this process until there were enough clues for the centre to be solved. The logic required would be a mixture of

From here I continued this process for other grids. I tried to make sure to fill in as few clues as possible, while also making sure that surrounding grids were needed to help solve a new grid.

The hardest to clue where the boxes on the outside where there was no overlap. For many, I had to put more clues than I would have liked, but as there is no overlap, no knowledge from other cells could be used to help resolve numbers.

I kept going, solving as I went using the right hand grid until I was fairly confident that there were enough clues to solve the grid.

At this point I had spent DAYS creating this puzzle. I wasn't about to post it in a hurry to find out there was a mistake or that there wasn't a solution!

Firstly, I wanted to double check that my 'solve-as-you-go' solution was correct. I created another blank grid, and wrote the following into the top left cell:

Dragging the formula across the grid, I got a number showing the difference between my intended solution and my go-along solution for each corresponding cell. Luckily for me, the whole grid was all $0$s, meaning my solution matched the intended one!!

Next I wanted to check the clues were all one more or one less than the solution number. However, I didn't want to just calculate the difference for every cell, as I don't care about the difference if the clue cell is blank. For the same grid, I wrote the following into the top left cell:

Once again, luckily for me, all the cells showed a $1$, meaning all my clues were correct!!

The only real way to check the puzzle was solvable was to solve it myself. At this point my parents were also interested in my creation, so I printed off copies for them too.

It took me about 3 hours to solve in total, but that was me knowing the logic and knowing the rough solving route that is easiest. It took both my parents 6+ hours, but we all managed to solve it, and all managed to get the correct solution so I knew my puzzle was solvable. The time taken also meant I knew it was quite hard, which is exactly what I wanted!!

I copied it to both google docs and to drive so it could be downloaded, clipped the clues and the puzzle in front of you was the result!

Some things I've taken from creating this puzzle:

I hope this was an enjoyable puzzle, and if anyone wants to see some new variant mash ups please let me know!

If anyone has some more questions feel free to ask :)

With that, this was how this puzzle was created! Hopefully you can take something away from this post. Thank you all for solving!