There is a (very insecure) safe, which has three digits in the lock. Each digit can only be $0,1,2$. The user choose a password made up with three $0,1,2$ digits, and the safe can be unlocked if at least two digits match the password at the exact position. How many tries at most to guarantee the opening of the safe?

From a primary math Olympiad problem. (I remembered that it was the last problem but forgot the competition.)

Bonus: How many tries at most to guarantee the knowledge of the original password?

I think the best we can do is

The following tries will cover all possibilities

Proof that this is the best possible

Each try covers exactly 7 possibilities for the combination. Since there are 27 possible combinations this gives us a lower bound of four tries in the worst case scenario.
Additionally, to reach all combinations with four tries, three of the tries must have no mutual overlap in the combinations they cover.
Two tries have no overlap if and only if all three digits are different.
Therefore, without loss of generality, we can make the first three tries 000, 111 and 222.
But now we see it is impossible to cover the remaining possibilities with one additional try.

Alternative Proof (courtesy of Jaap Scherphuis in the comments)

With 5 or fewer guesses, there must be one that has a unique first digit by the pigeonhole principle. There are four codes that start with the same digit which are not covered by this guess. Your other guesses have a different first digit so would have to match both other digits to eliminate one of these codes, so you need at least four further guesses.

Suppose we make the guess 000 and it opens the safe.

We can form a similar sequence for any case where the safe opens. Using our original set of five guesses, if the safe opens for one of the first four guesses, we can use that as our starting point for the sequence above. If not, we know that 221 will open the safe so we don't need to try it but can use it as our starting point. So the maximum number of guesses needed is 4+4=8.

There seems to be some wiggle room here so it might be possible to reduce this to 7 but I'm not sure at the moment how to do it.

There are $27$ different possibilities to enter into the lock. Let's say two of them are connected if they have two common digits (in the same positions); so every possibility is connected to exactly $6$ others. We can show them on a diagram like this: 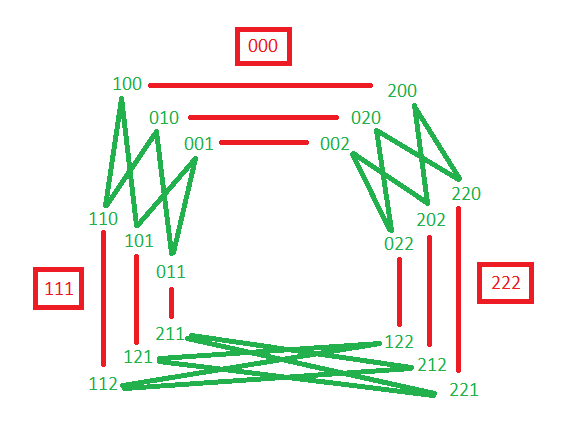 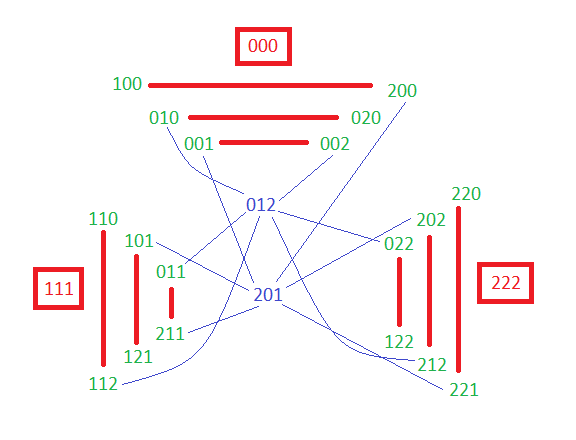 So we can unlock the safe with

Is it possible to do better?

No, see hexomino's answer. (I found this solution independently, but didn't get around to proving optimality before the other answer was posted. However, I still think it's worth having this answer for the pictorial approach which makes it seem natural.)

So we can manage to deduce the exact password with

Not the answer you're looking for? Browse other questions tagged mathematics no-computers combinatorics password or ask your own question.

13
Save d'alar'cop by Helping Him Defuse The Bomb Placed By An Assassin
17
Faulty Combination Lock
7
Lock Optimisation
8
Ernie and the Grand Tour
15
Ernie and the slice of Pi
4
Unlock the code!
11
Hacking a Safe Lock after 3 tries
6
Help Me unlock her phone
1
Find the least number of objects from a jar when those have two colors