A Game of Black and White

Two people are playing a board game that involves dice. However, one of the players has rigged the dice so that they get the highest possible roll on every turn, while the other player gets a random roll. With this, player one wins almost every game by a landslide.

In one game, Player Two finds a way to consistently stop Player One from achieving a landslide victory, but they have to rely on lucky rolls to win in the end.

In a second game, Player Two finds another way to consistently stop Player One from winning, this time resulting in a landslide victory for Player Two without the need for lucky rolls in the end.

What game are they playing? What two strategies does Player Two use to stop the cheater?

Since there are surprisingly few two-player games with dice and black and white pieces, I think they were playing

In this game, the highest roll is

a double six, giving the player a total of 24 progress, compared to, say, a four and five, which gives 9.

This should give the cheater a landslide victory over a random player.

However, even a little strategy goes a long way against such a single-minded cheat: by rolling, say 1 and 6, the cheater's two farthest-away pieces can be blocked on their starting spot. This allows the other player to bring all their pieces to the home board before the cheater can move their two pieces out. In the end, it's still going to be a race though. 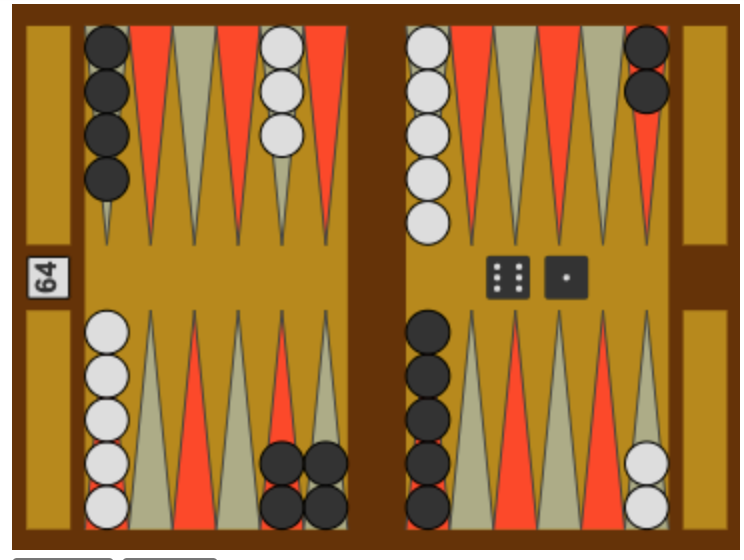 A more resounding victory can be achieved by

letting the two farthest pieces out of the home board, and then capturing one of the cheater's pieces. (The cheater cannot reliably prevent a capture).

The cheater won't be able to make any progress whatsoever, and as long as the other player is careful to

the game is pretty much over by the time the cheater gets their captured piece off the bar.

20
Let's continue our Monopoly game
6
Tips for making board game victory sequence puzzles
13
Stepladder Game, Introduction and Puzzle 1: Turning
18
What is the optimal strategy for this triangular board game?
10
Black to play and win (Teeko)
18
A game of red and black
14
Gliding through an ice-maze
26
Shortest game of Monopoly
28
PSE Advent Calendar 2021 (Day 11): What Child – Er, Game Is This?