Stress Not! - A North Daniels' Puzzle

No, this was not the sound of D.S.I North Daniels playing miniature cricket on his phone, although that would be a preferable situation to the one he is in now.

Unfortunately, EOD Operator classes were not part of police training, and watching all those Die Hard movies didn't yield any useful information applicable to the current situation.

There was a bomb in his house

It was like a spherical white globe and was very, very small. It really did not fit the Bohemian style of his Islington studio apartment. What's more, the aggressor took the trouble to bolt the thing to the floor, which not only made it impossible to move, but also ruined the tiles he'd laid only yesterday. Also, being on the fifteenth floor, it's unlikely any help would reach him very quickly, since the lift was broken again, and the telephone was down due to the riots in the telecommunications sector

Luckily for him, and I'm really scraping the bottom of the barrel here, the aggressor had left some "handy hints" to help disarm the bomb. The bomb itself had a keyboard on top, with a large red button in the middle. A note on the side said: 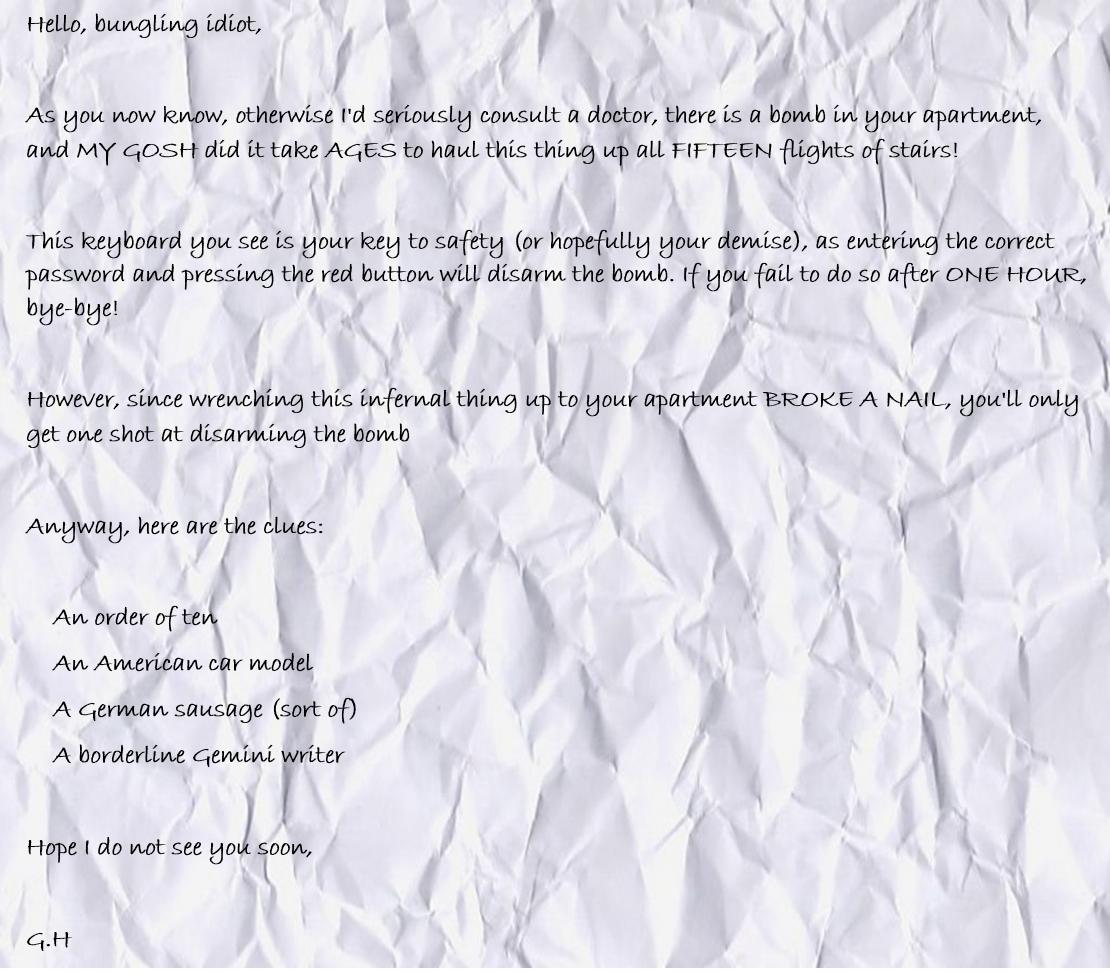 As Daniels slumped on his Chesterfield sofa, gazing at the note, his mind wandered away, reflecting on the last five years of police service, hoping something would be useful, but nothing came. Sure, that year abroad taking flying lessons was amazing, and curling up in the evenings in front of the TV watching a documentary about George the Third was magical...

"Whoops, off topic" said Daniels, as he leapt up and paced nervously up and down the room, mulling over the four clues in his head.

"Maybe they represent something..."

"Maybe they are linked somehow..."

"Maybe my experiences will help..."

"Maybe my whole life is connected with this..."

No, it was hopeless, he had to run and get some help, without hurting his ankle running down the stairs. So, he hurtled towards the door, grabbed the ebony door knob, and...

After standing still for almost a minute, North rushed towards the bomb, typed in the answer, and slammed the red button....

Suddenly, he was greeted by one of his own terrible songs emanating from the bomb about people's limbs being swapped. He HATED that song...

1. North was on the right track when he pondered the four existential questions, although they do not map onto the four clues left by "G.H"

To my dearest G.H
As you now probably know, I survived your little scheme. Why didn't your clues include:

Say hello to Jelia for me - I haven't been to the prison for years! Her poetry is remarkable!
Lots of love
North

3. Of the seven clues, at least three are quite specific. Try listing all possibilities of them down, and see if you spot anything

4. XP is valuable, especially when written down

1. The console North is looking at has a screen saying "Enter the answer", a numerical keypad, and a big red button that says "ENTER": 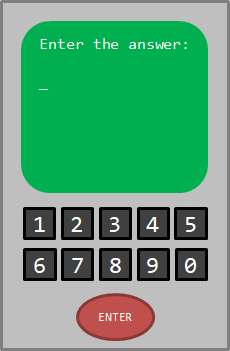 2. You are looking for (To reserve)s

Browse other questions tagged riddle word knowledge story or ask your own question.

11
Nothing beats a Daniels
20
The Prison Escape Pt. 1 (THE DOOR)
9
Undeviginti - An Enigmatic Puzzle in the theme of the Ancient Times
7
Help me find my friend Bill
22
So many Anagrams!
7
Where did my Professor GO?
6
Puzzle House #1: Entrance Hall
5
Locked Room Murder!! How and who?
7
Place of Safety - A North Daniels' Puzzle
4
Covert Conversation - A North Daniels' Puzzle