I'm standing on the surface of the Earth. I walk ten miles south, ten miles east, ten miles north and ten miles west. I end up exactly where I started.
Where on earth am I?

I think there are three(ish) choices. The simplest one is

5 miles north of the equator. (The lengths of the latitudinal circles change symmetrically on both sides the equator, so the ten miles east and west portions span the same amount of latitude degrees if (and only if) they happen equally far from the equator.)

To find the other solutions, we have to notice that

This means we can also start

a bit more than 10 miles from the South Pole: We walk the 10 miles to a carefully chosen point suitably near the pole, and from there the ten miles east go around the pole some appropriate number of times, and then a bit more so that our latitude ends up being a bit under 60 degrees east of the original one, which is what is needed for completing the trip.

The possible paths would look something like this: (nowhere near exact, and not to scale) 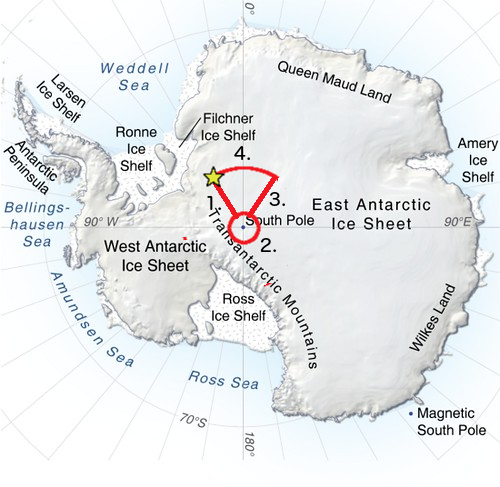 (The circle is of course smaller if the eastward ten miles part goes around the pole more than once. The maths needed for figuring out all the (infinitely many) exact distances at which this works get somewhat messy because the angle between 1 and 3 doesn't stay constant; go ahead and have a crack at it if you like challenges.)

and then we can, of course, start

Quite near the North Pole: same pattern as before, but circling the pole happens on the westward portion of the trip.

Five miles north of the equator.

This is a riff on the classical North Pole riddle, but the twist is that you seem to make a full circuit, so it is tempting to say "anywhere". However, because the earth is (approximately) a sphere, 10 miles east and 10 miles west are the same distance if and only if they are walked at the same latitude, or equal latitudes in the Northern/Southern hemispheres. Since the east and west segments are walked 10 miles north/south from each other, the only way this can happen is if these two segments are on opposite sides of the equator. Hence you must start five miles north of the equator.

Update: Based on @Bass's answer, I was curious about the actual calculation. Turns out it's really not that hard. 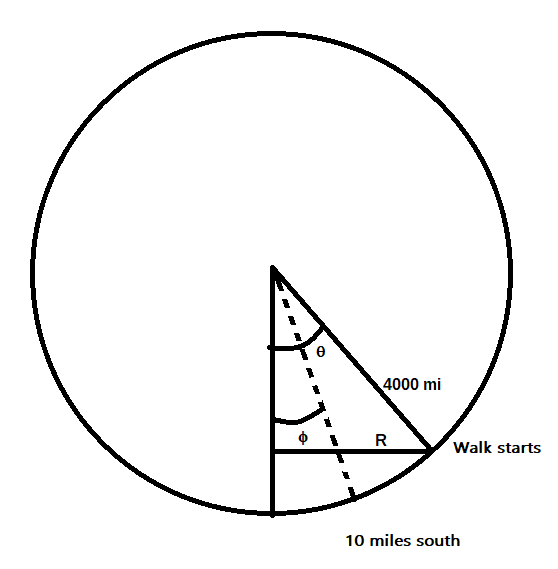 I think the answer depends on what "going east/west" means. That is:

Let us define "going east/west" as "going along a great circle of earth diagonal to the longitude circle you are on". Then going east/west changes latitude (unless you are on the equator). For example, going east from Japan you reach South America as the azimuthal equidistant projection map below indicates.

Under this definition, suppose you start from P1, walk south to P2, east to P3, north to P4 and west to P5. (Each walk is 10 miles long.) I check the following three cases.

If P1 and P2 are both in the southern hemisphere, there's no solution, by a similar argument to the Case 1.

If P1 is in the northern hemisphere and P2 in the southern, the answer is slightly less than 5 miles north of the equator as in the picture.

Not the answer you're looking for? Browse other questions tagged mathematics geometry geography or ask your own question.