The ferries over Mississippi

Here's an old challenge from an old book (I think it goes like this, if I remember well):

There is a place on Mississippi river between Missouri and Kentucky where are two ferry boats: the vintage Old Town and the modern president. One time, exactly at the same time, the Old Town left the Missouri shore and the president left the Kentucky shore.

Each ferry traveled at a fixed velocity and, after a while, they intersected each other 9000 feet from Missouri. When they arrived to the other side, they didn't waste any time and immediately started the journey back to intersect each other 3000 feet from Kentucky.

QUESTION #1:
What is the width of the river on the site where this story takes place?

QUESTION #2:
How far away from Kentucky will they intersect for the third time?

EDIT: For those who voted to close this question, this is NOT a mathematics problem. It's a mathematics puzzle. At least it's from an old book of puzzles (which title I honesty can't remember). You can't solve it by the use of conventional formulas like velocity or others. Can you at least leave a comment?

Here is a simple argument to deduce the solution to the first question without much arithmetic.

When the boats first meet, the total distance they have travelled is the width of the river.
When boats meet again, their total distance is three times the width of the river (each has done a full crossing, and they meet on their return trips which together span the river).
The boat leaving Missouri has travelled 9000 feet at the first meeting. By the time of the second meeting it will have travelled three times as far, or 27000 feet. We know that it has crossed the river once and are given that it travelled a further 3000 feet from that opposite side, so the river must be 24000 feet wide.

The second question is not quite as nice, but now we know the width of the river and the relative speed of the boats, so it can all be calculated fairly easily.

[Revised to cover both parts of the puzzle, beginning with the original post.]

While the puzzle has already been completely solved by Jaap Scherphuis a geometric approach works very nicely for the puzzle’s first part that asks for the width of the river. As time flows downward (as well as downstream if the ferries are carried by a current, thanks to Pspl’s observation, the same diagrams apply) on these graphs the trajectory of the slower ferry looks steeper than that of the faster ferry.

Begin by representing the first and second meetings of the ferries. Notice that the first meeting forms a triangle.

Now unfold the graph of the second meeting by interpreting each ferry’s turnaround at a bank as reflection off of a mirror. Note the large triangle formed by this unfolded second meeting. 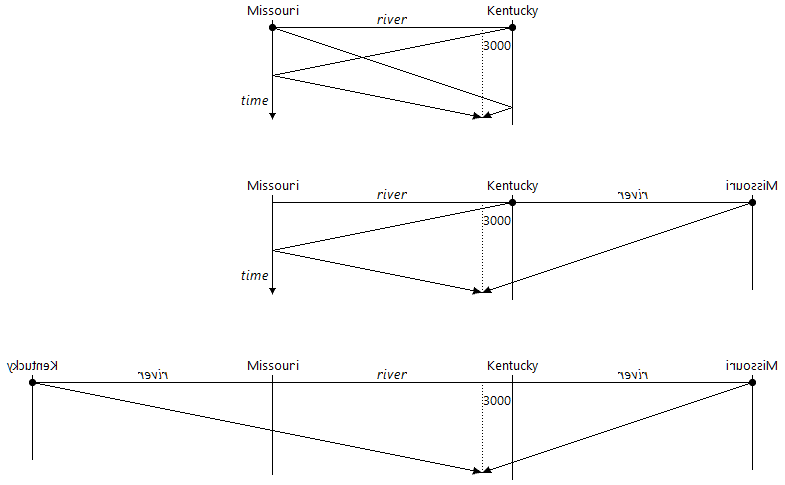 [The rest was added a day later.]

To find the third meeting point begins with unfolding a diagram that assumes that the faster ferry will overtake the slower ferry after bouncing off the Kentucky shore. 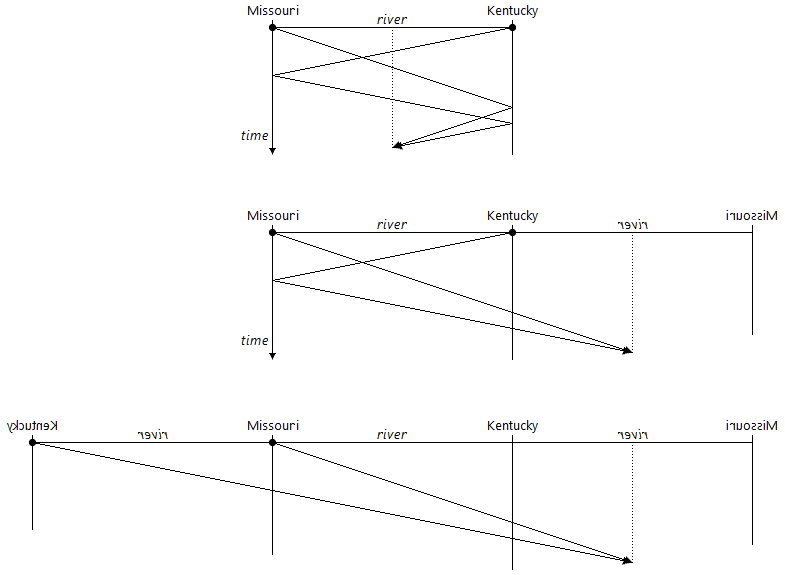 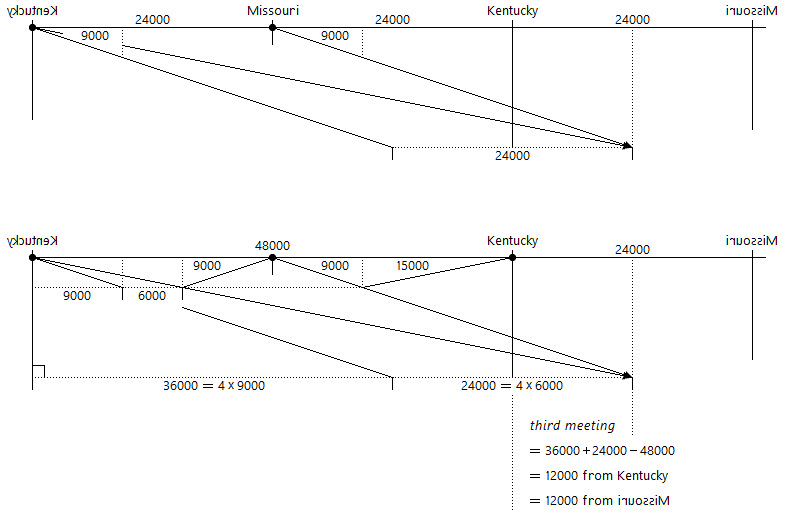 There’s the first meeting’s triangle again, along with its left-to-right reflection, helping to form and measure a pair of right triangles geometrically similar to those that define the parallelogram’s sides and long diagonal.

15
The Mexican Standoff
13
Directions on an infinite compass rose
31
Ernie and the Alchemist's Gift
0
Race of the century
15
Ernie and the Artificial Emmental
20
Dwarfs over bridge problem
11
Ernie and the Thrones of the Aqua-ant
20
The Prison Escape Pt. 1 (THE DOOR)
5
How to choose the next board in the 8-puzzle?
10
Interplanetary blips and bleeps