What type of puzzles are the statue puzzles in Super Lucky's Tale, and what method should be used for solving them?

This question is about a set of puzzles in the video game "Super Lucky's Tale" (as well as its Nintendo Switch remake "New Super Lucky's Tale"). They are known as statue puzzles as they involve sliding statues around.

Here is a YouTube video which shows all of the statue puzzles in the game and how to solve them.

However, I don't want someone to tell me the solution to each puzzle, I want to know what method I should use if I am trying to solve the puzzle myself. The first few puzzles in the game I solved by randomly performing actions until I solved them, but when I got to the harder ones, I found myself going around in circles. I am sure there must be some kind of methodical way to solve such puzzles.

Before anyone asks, I did post this question already over on Arqade (Gaming SE) over six months ago and no one has replied. I was hoping to get more answers on Puzzling SE.

I will describe the puzzle conceptually so as to save people having to watch the video.

The puzzle is made up of a set of floor-tiles arranged adjacent to each other (so any tile has another tile either upward, below, to the left or to the right of it). Some tiles are marked with a "+" symbol. In the initial puzzle state, each tile either has a fox statue on it, a golem statue on it, or no statue on it. There will always be the same number of fox statues as "+" tiles.

The object of the puzzle is to get to a state where all fox statues are on "+" tiles. (The golem statues will, logically, not be on "+" tiles in this final state.)

An action in the puzzle consists of pushing a statue up, down, left or right. The statue will continue to slide across the tiles until it either runs out of tiles or hits another statue.

Here I will give an example puzzle in case the above explanation was not clear. This puzzle is the one starting at around timestamp 7:50 in the above-linked video. 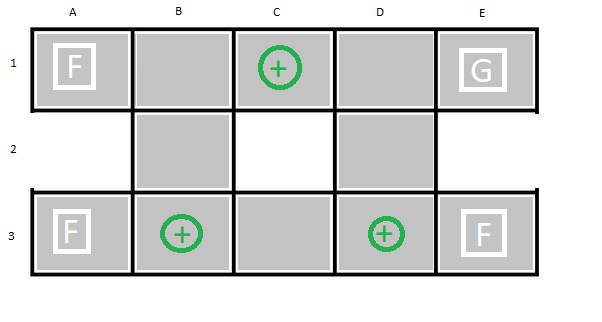 Now I will describe the solution to this particular puzzle.

Goal will be to get each fox statue onto a "+" tile:

Puzzle can be solved in 8 moves:

What I am looking for is how would you solve such a puzzle methodically without having the solution, or any other puzzle of this type?

Browse other questions tagged visual puzzle-identification sliding-blocks or ask your own question.

13
Klotski Puzzle 1
14
4x4 Sliding Puzzle with a twist
10
Turn on all squares
6
SwapTiles World Challenge
6
Is there a configuration of the 8-puzzle where locking a tile makes it harder?
5
Techniques for solving row & column sliding puzzles
4
Sliding Block Puzzle
9
16 Step Switchover
9
How to solve the "Lutz" sliding puzzle